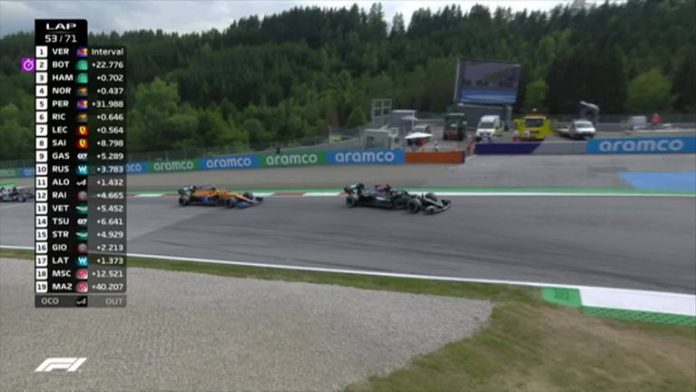 Lewis Hamilton lost “around six or seventh tenths” of lap time performance in the Austrian GP after sustaining damage to his car, Mercedes have explained.

Hamilton lost key extra points to race-winning title rival Max Verstappen as he slipped from second to fourth in Sunday’s race in the stint after his first pit stop.

Mercedes revealed Hamilton sustained the damage to the rear bodywork of his car over the kerbs at the circuit’s final corner, although Toto Wolff said this was not because the world champion had been “running too hard over the kerb, it was just a part that fell away”.

Hamilton’s pace then fell away as a result of the significant lost points of rear downforce.

Explaining the impact on the W12’s speed, Andrew Shovlin, Mercedes’ trackside engineering director, said: “It looks like the bodywork damage for Lewis was at the end of lap 29 just before we came in.

“The downforce loss was around six or seven tenths but as it was all from the rear, the balance become difficult and we were damaging the rears with sliding.”

After being overtaken in an orchestrated move by team-mate Valtteri Bottas on lap 52, and then McLaren’s Lando Norris a lap later, Hamilton pitted for a second time for new tyres.

However, his damaged Mercedes did not have the pace or balance to close back in on the podium places and he finished 26 seconds behind Norris’ McLaren in fourth.

“I was in second when all of a sudden it obviously broke,” said Hamilton, who had overtaken Norris to run second to Verstappen on lap 20.

“Second place would have been easy.”

Verstappen, who won at a canter, stretched his championship lead over Hamilton to a season-high 32 points after his third win in as many weekends and Red Bull’s fifth on the spin.

“I already said before the race that it would be very hard to beat Max of course,” added Hamilton, whose last win came at the Spanish GP in mid-May. “It’s obviously frustrating to lose so much downforce on the rear of the car and not be able to hold on to second place.

“So a lot of points lost today.”

Mercedes next head to the Brackley-based outfit’s home British GP aiming to strike back on a fast, flowing Silverstone circuit which should be more favourable to their car than the Red Bull Ring.