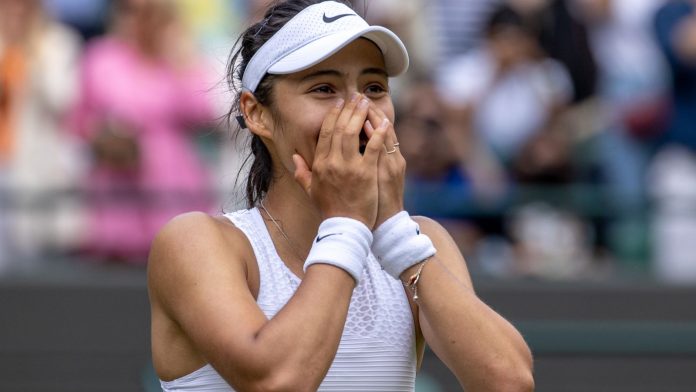 British teen sensation Emma Raducanu prepares for a fourth-round clash against Australian Ajla Tomljanovic on Court One; Angelique Kerber is the only former champion remaining in the women’s draw; Novak Djokovic and Roger Federer are in action on Centre Court

The Grand Slam is the only major to schedule all 16 women’s and men’s fourth-round singles matches on the same day, but the traditional middle Sunday of rest will disappear next year with the last 16 being split over the course of two days, in line with the other three majors.

There will be a galaxy of top stars in action, including teenagers Raducanu and Coco Gauff, Ashleigh Barty and Angelique Kerber in women’s matches, along with Novak Djokovic, Roger Federer, a total of eight of the top 10 seeds and 20-year-old American Sebastian Korda in men’s matches.

“Everybody wants more days. Look, more days means more revenue, more options, more this and that. I get it,” said Federer. I don’t think they did it only because of revenue. I think they just think its going with the times, as well.

“It’s quite possible that the rest of the fortnight could end up being viewed as its own sort of referendum on the present and future of tennis.”

Britain’s Raducanu, a wildcard entry who is 18, is ranked 338th in the world, and awaiting her A-Level results.

She now returns to Court One on Monday to take on world No 75 Ajla Tomljanovic for a spot in the quarter-finals, and she does not want her journey to finish just yet.

“It’s incredible,” she said. “I’m so grateful for this wildcard. Honestly, I just wanted to make the most out of it, try to show that I earned it. I’m really grateful for the All England Club’s support in taking a chance on me.

“And the way that I’m approaching my matches is each time I’m thinking to myself, ‘Why not?’. Like today, I was like, ‘Someone has to be in the second week, why not me?’.

“I’m just trying to stay here as long as possible. As I said, I’m just having such a blast. Everything is so well taken care of that it’s such a pleasure to be here.”

Tomljanovic is 10 years Raducanu’s senior but also looking to reach a Grand Slam quarter-final for the first time.

After a first week at Wimbledon, 13 of the top 20 seeds went out and Angelique Kerber is the only former champion remaining in the women’s draw.

While she has been there and done it at the All England Club, she now faces the new sweetheart of Centre Court Coco Gauff, who has matched her 2019 run to the fourth round.

It is the first meeting between the pair and Kerber hopes experience will count for something.

“I think it will be really an interesting match. I mean, I never played against her before, she’s a newcomer.

“She played already so many good matches. She beat top players. She’s really dangerous, especially on a grass court.

“I see the fire in her, as well. She’s really putting all the effort she has in every single match. So I know that it will be a tough match.

“But of course, one point may be the experience is good, but on the other side I think it’s more like it’s a new match, I know that I have to play one of my best tennis matches against her.

“This is the goal, to go out there and try to focus more on me. I mean, she’s, I don’t know how many years younger than me, but still I think it will be a good match.”

World No 1 Barty has matched her best-ever run at the tournament and will now face French Open champion Barbora Krejcikova, who had never won a match at Wimbledon before this year.

Iga Swiatek takes on Ons Jabuer in an entertaining-looking clash, while second seed Aryna Sabalenka is up against Elena Rybakina and former world No 1 Karolina Pliskova plays Liudmila Samsonova.

Paula Badosa and Karolina Muchova go up against each other with Madison Keys and Viktorija Golubic completing the line-up.

Manic Monday is going to be a lot of fun 🙌#Wimbledon pic.twitter.com/QzvmTxn4hj

Men’s top seed Djokovic has enjoyed a gentle breeze to the last 16 as he chases a record-equalling 20th Grand Slam title and he will be a big favourite to beat Chile’s Cristian Garin in the Centre Court opener.

Second Monday would not feel authentic without eight-time champion Federer and the Swiss maestro, approaching his 40th birthday, has clicked smoothly onto gear ahead of his match against 23rd seed Lorenzo Sonego.

Matteo Berrettini, the Queen’s Club champion, has looked supremely confident so far, as he prepares to face Belarussian Ilya Ivashka.

The American credits a lot of his progress to his sporting family, which includes his father, 1998 Australian Open champion Petr Korda.

“I wasn’t expecting all this, I guess you could say, success so early,” said Korda. “My parents were always so big into just baby steps, baby steps. I have them to thank, because the journey I took is a lot different than everybody else. I think I appreciate things a little bit more because I’ve been at the lowest level of tennis, I’ve built my way up.”