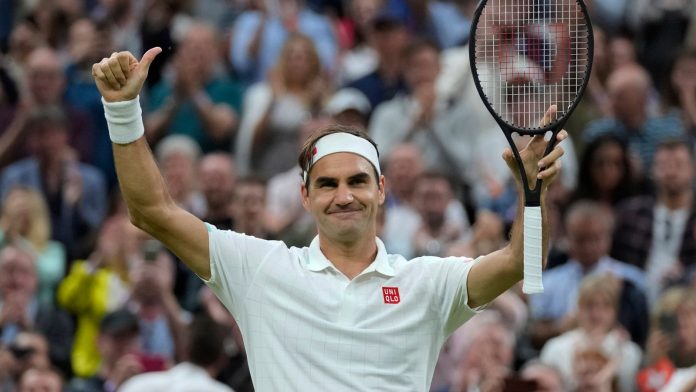 Roger Federer and Novak Djokovic remained on course for a potential fourth Wimbledon final showdown after easing into the last eight of this year’s championship.

The pair have met in three previous men’s singles finals – Djokovic winning on all three occasions – and having been placed in opposite halves of the draw another meeting in the Wimbledon showpiece could be on the cards.

Any meeting this year would be significant as Djokovic chases a 20th Grand Slam title to draw level with Federer and Rafael Nadal on the men’s all-time list, while Federer is chasing a 21st title that would give him daylight over his great rivals.

Federer was in spectacular form under the Centre Court roof on Monday evening and after a fairly even start, the 39-year-old took control to seal a victory that means he is the oldest man in the Open era to reach the Wimbledon quarter-finals.

The eight-time champion, who last lifted the trophy in 2017, raced through his match against Italy’s Lorenzo Sonego 7-5 6-4 6-2 and into a meeting with either world No 2 Daniil Medvedev or Poland’s Hubert Hurcacz.

Second seed Medvedev was leading 6-2 6-7 6-3 3-4 when rain forced the match off court and they will resume on Tuesday as the first match on Centre Court.

Djokovic is the two-time defending champion and progress has been serene for the world No 1 so far, who will next face Hungary Marton Fucsovics – one of three first-time quarter-finalists to emerge on Monday.

Djokovic, who had dropped two sets on route to his meeting with Chile’s Cristian Garin, rarely looked in any trouble across 1hr and 49mins as he held every service game beat to the 17th seed 6-2 6-4, 6-2.

Victory for Djokovic means he has reached his 12th Wimbledon quarter-final, level with Arthur Gore and behind Jimmy Conners (14). Federer’s win over Sonego took him into his 18th quarter-final on the all-time Wimbledon men’s quarter-final tallies.

“It is a privilege to break records in the sport that I truly love,” said Djokovic.

“I’m devoted to this sport as much as I think anybody out there on the tour, I just try to do my best.”

Next up for Djokovic is Fucsovics, who became the first Hungarian to reach the Wimbledon men’s quarter-finals in more than 60 years with a 6-3, 4-6, 4-6, 6-0, 6-3 victory over fifth seed Andrey Rublev.

After Rublev’s departure, another of the world’s top 10 toppled out as fourth seed Alexander Zverev lost a five-set epic against Canada’s Felix Auger-Aliassime, who reached his first Grand Slam quarter-final.

The 16th seed had taken a two-set lead but saw Zverev rally impressively to take the match to a final set. In his relatively short career, Auger-Aliassime has never won a five-set match, but the 20-year-old from Montreal held his nerve impressive to win through to a meeting with Matteo Berrettini.

The seventh seed became the first Italian man in 23 years to reach the Wimbledon quarter-finals by ousting Ilya Ivashka 6-4, 6-3, 6-1 to extend his winning streak on grass having claimed the title at Queen’s a couple of weeks ago.

It was a second successive straight-sets victory from Shapovalov, who was also given a bye in the second round after opponent Pablo Andujar was forced to retire.

In contrast, his opponent in the quarter-finals will be Karen Khachanov, who needed nearly four hours to eventually see off Sebastian Korda, who was celebrating his 21st birthday.