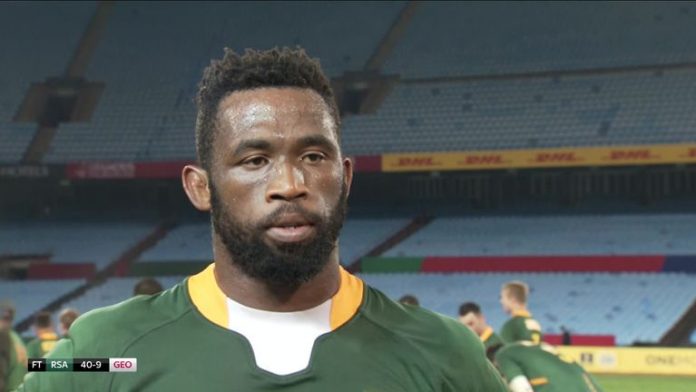 Sky Sports Rugby speak to 124-cap former Springbok Bryan Habana to get his thoughts on South Africa and British and Irish Lions’ recent performances; standout performers from both sides; what to expect from the Cell C Sharks on Wednesday; his Lions back-three for the Test series.

South Africa legend and Rugby World Cup winner Bryan Habana discusses the Springboks and British and Irish Lions so far, standout players, what to expect from the Sharks and his Lions back-three…

“Yeah brilliant to see them again, 609 days since that World Cup final.

“I think everyone was over-eager and optimistic in terms of what they were going to get, but when a side hasn’t played together for 20 months there were going to be some cobwebs.

“Initially everyone seemed rather underwhelmed with the Springbok performance, but then it’s different when you have been a player, you look at things a little differently.

“Looking at how the game progressed, maybe the score-line flattered the Springboks, but to still beat Georgia 40-9, I went back to the Autumn Nations Cup and England beat them 40-0, Ireland was 23-10 and Wales 18-0, and it puts things into perspective with context.

Siya Kolisi says the team want to bring joy to the fans during a ‘difficult time’ for the country, after leading the Springboks to a 40-9 win over Georgia

“So where I was maybe cautiously unexcited about the prospects of the Boks, I now look and see guys like Pieter-Steph du Toit playing incredibly well and Handre Pollard back to full fitness and kicking some incredible penalties.

“It was good to see the Boks out there, having not been able to solidify the fact they are World Cup champions after not playing rugby for so long.

“I feel for the players, because yes Cheslin Kolbe has gone to Europe and done well, the Sale Sharks boys have been doing well, but they haven’t been able to properly springboard off that World Cup win in terms of being in South Africa, playing in front of crowds and now a once-in-a-career (unless you’re Morne Steyn and Frans Steyn) opportunity will be without crowds.

“Sitting there on Friday, I was incredibly proud to be South African. To see that this was the World Cup champions.

“Listening to Sarra Elgan Easterby interviewing Siya Kolisi and how inspirational he still is, and how that hasn’t faded.

“So, incredibly proud. Yes there was a lot of rust, a new coach that has taken over the reins and a few debutants that put their hands up. It was good to see them back.”

Habana on the performance, form and return of Pieter-Steph du Toit after his serious quad injury…

“It’s not just been this week [where he has performed well following injury]. I actually watched his first game back about four weeks ago, and he got man of the match there as well!

“And I’m thinking: ‘How does a guy who 12 months ago almost lost his leg go to not looking as if he’s even been off a rugby field?’

“I played with Pieter-Steph when he was just a youngster. We went to the World Cup in 2015 when he was 23, and just to see how he’s developed both as a player and a person: he’s now been named SA player of the year three times, which just goes to show his quality.

“But it was exceptional to see the manner in which he brought exactly what he’s about to the field against a pretty intensely physical Georgia side throughout the 80 minutes. He was beating defenders, breaking tackles, tackling with absolute dominance, so it was brilliant.

“He set the tone and was rightfully named man of the match.”

“The man of the match in Hamish Watson was astounding.

“I think he was gutted to miss the Japan game at Murrayfield through concussion, but he again showed why he was named Six Nations player of the year.

“He’s effective on both attack and defence, his try-scoring, he showed his sheer power within his stature.

“Everyone has a lot of things to say around how relatively small he is in comparison to other openside flankers, but he was phenomenal.

“Josh Adams scoring four tries. People are saying he was at the end of a lot of them, but to score four tries on the international circuit is exceptional.

“For me, Stuart Hogg’s leadership was really good. His decision making from a counter-attack perspective in terms of when to kick and when to run, the manner in which he chased down the Sigma Lions flanker Sibusiso Sangweni just showed his experience, tenacity and leadership abilities because he could have easily given up.

“For me, that was a moment of the match which laid a marker down in terms of how much business the Lions actually mean.

“I was really disappointed in the Sigma Lions performance, because I really believed they would pose a bigger threat.

“But, when the opposition is bad, you deal with them appropriately and the British and Irish Lions did that well.”

“I don’t think he’s using any of the negative criticism that has come his way as a fuel in any way or form.

“From what I’ve heard and seen from him, he’s extremely professional. His resilience and fight is incredible, and he is a phenomenal player.

“I think he does the basics exceptionally well, he does what’s needed of him, but he also gets involved in the game, and I think that’s what he thrives off: being in those physical collisions.

An immensely proud day for me and my family 🦁 #847 pic.twitter.com/6EFN5zeXnK

“He’s a brilliant player who has deservedly been named in this Lions squad. When you outshine a person who scores four tries in a game, you’re there for a reason.

“He hasn’t been written off by South African media. Because we don’t see a lot of the Six Nations and PRO14, a lot of South Africans might not have seen him, but after last week’s game, they will know exactly who Hamish Watson is.”

Habana on what to expect from the Cell C Sharks…

“Hopefully much better than what we saw from the Sigma Lions to be brutally honest.

“The Sharks are a team, along with the Bulls, who have probably been the dominant force in South African rugby for the last couple of years.

“They were unlucky when Super Rugby got culled last year, because they were actually leading the standings really well, and playing some attractive, fast, free-flowing, attacking rugby.

“They will obviously be without their Springboks due to this Lions series and the bubble etc, so they have lost resources, but even outside of that, they have a number of players that have international experience.

Building up to the British & Irish Lions game this Wednesday 🔥🦈#OurSharksForever pic.twitter.com/M7zIjQa09G

“Curwin Bosch particularly at 10 has really been playing well, and been given a lot more opportunity in the fly-half position after floating between that and full-back over the last couple of years.

“There are some exciting youngsters too.

“It will be a running-rugby type of game. Physically, I think they will be able to match the Lions a little bit more than what the Sigma Lions did last week.

“Hopefully it will be a tougher test for the British and Irish Lions as that first Test match on the 24 July comes closer.”

Habana on the British and Irish Lions’ depth at back-three, and the back-three he would select for the Test series…

“Obviously there are bolters and not everyone’s team is going to be the same, but to think that Jonny May is not in this Lions squad and you’re still at a point where you don’t know who’s going to start.

“Josh Adams has five tries, Louis Rees-Zammit scored a try on debut, Anthony Watson can play full-back and on the wing, Liam Williams was a star of 2017.

“In my opinion, I think Stuart Hogg will definitely be the full-back. I think he’s really shone for Exeter. It was astounding to all of us that he didn’t start the Premiership final for Exeter.

“He’s really come to the fore more in terms of his decision-making.

“Adams, I don’t want to say he has already cemented his place, but I think he is in a good position as he played on the right vs Japan and the left last week, showing his versatility.

“I think Van der Merwe could pose a massive threat to the country of his birth, and we saw that against Japan.

“I would go with Anthony Watson. His experience – he’s played over 50 times for England – he was incredible in the 2017 series, and I think he’d be complimentary to Hogg and Adams.

“That would be a back-three that is very versatile, pacy, and good under the high ball – which is an area Warren Gatland will be looking at with the Springboks kicking game.

“Stuart Hogg, Anthony Watson and Josh Adams for me.”