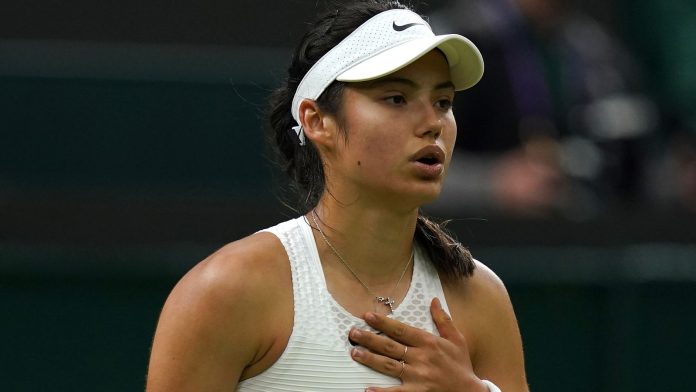 By Raz Mirza at Wimbledon

Emma Raducanu’s remarkable story at Wimbledon came to an end after she was forced to retire from her match against Australian Ajla Tomljanovic.

The teenage sensation has quickly become the story of the Championships, having only played one WTA Tour level match before this tournament.

But she was noticeably struggling to breathe having lost the opening set and, after consulting with the trainer and doctor, she took a medical timeout where it was deemed she could not continue.

Due to medical reasons, Emma Raducanu has retired from this match – but what an incredible run to the fourth round it was 💚 💜#Wimbledon pic.twitter.com/fmp6M0twDw

Two months ago Raducanu was sitting her A-Level exams and until a month ago she had not even contested a match on the main WTA Tour. In a whirlwind few days, 18-year-old Raducanu dumped out Vitalia Diatchenko, 2019 French Open runner-up Marketa Vondrousova and 45th-ranked Romanian Sorana Cirstea.

Raducanu, who is ranked 338 in the world, was cheered on by a boisterous crowd under the roof of Court One and she made a composed start to the match.

Tomljanovic was also on unfamiliar territory having reached the last 16 at Wimbledon for the first time.

The 28-year-old, who reached a career-high No 39 in 2019, survived a break point in the seventh game before extracting herself from an eight-minute service game for a 5-4 lead.

The Kent teenager then absorbed an onslaught from Tomljanovic, before she fired long on set point to hand the Australian an early advantage.

Raducanu appeared to be hyperventilating early in the second set and she called for medical assistance after falling 3-0 down.

It quickly became clear she was in some difficulty and following a short delay the umpire called the match for world No 75 Tomljanovic.

Despite the disappointing ending, it has been a career-launching fortnight for the teenager, who will climb to 175th in the rankings from her current mark of 338 and can look forward to many better nights to come.

Tomljanovic joins boyfriend Matteo Berrettini, who was watching courtside, in the quarter-finals having made it to the last eight of a Grand Slam for the first time.

how it how it’s
started: going: pic.twitter.com/p3tu131nGi

Despite a liking for the grass courts, Barty had never made it past this stage before, but she put that right with a 7-5 6-3 win on Court One.

Barty had to pull out of the most recent tournament at Roland Garros with injury, but she is feeling fit again and is preparing to go even further at the All England Club.

The Australian now has high hopes of adding a second Grand Slam title to her collection, having won at Roland Garros in 2019.

Ash Barty through the quarters @Wimbledon and getting better with every match. Just the way you’d like it to be. #wimbledon

“I’m feeling great. I’m feeling ready,” she said. “Obviously getting more and more matches is really nice to be able to feel the court under my feet.

“The focus in between matches is exactly how it always is. It’s recovery and prioritising that recovery.

“Always been a massive part of my career. Being able to do that this week has been great.

“We just continue to do all the right things. Obviously, like I’ve said, the rehabs between Paris and here in London, we had 22 or 23 days. We were able to kind of work backwards from that point. We did everything as best we could.

“It was a different preparation for this tournament. Without a doubt it was unique. I did everything in my power to make sure I was well-prepared to come into this tournament.

“I feel like we’re doing all the right things, we’re trying to do everything that we can each and every day to be as ready as possible for the next day. That’s no different to how we prepare for each and every tournament. I’m certainly happy with the way things are going.”