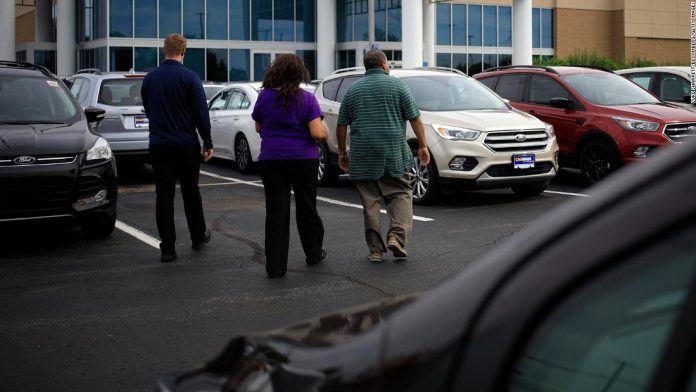 A version of this story first appeared in CNN Business’ Before the Bell newsletter. Not a subscriber? You can sign up right here.
Shortages are not something consumers in developed economies are used to dealing with. They are annoying. But they can also feed inflation, because consumers are competing over fewer products, driving up prices.
The big question is how long shortages will persist. For clues, investors can look to Asia, where supplier delivery times across manufacturing sectors increased in June. Industrial production in South Korea and Japan fell in May.
“All of this will reinforce concerns that supply is failing to keep pace with red-hot demand and provide more grist to the inflation mill,” said Neil Shearing, group chief economist at Capital Economics.
“Supply shortages are not going to disappear overnight — on the contrary, they are likely to persist in some form until well into 2022,” he added.
But there are signs that shortages could start to ease in the coming months, according to Shearing. He pointed to survey data that shows Japanese manufacturers expect a sharp rebound in production led by carmakers.
Export orders for Taiwan, a major producer of semiconductors that have been in short supply, also appear to have plateaued in recent months.
“There are at least reasons to think that the extreme crunch in autos will now ease, and that supply shortages in other sectors will start to diminish over the second half of this year,” said Shearing.
That’s good news for anyone looking to buy a car. But with some shortages set to continue into next year, it’s probably too early for investors to conclude that red-hot demand won’t be a factor in rising prices.

Kaseya says that between 800 and 1,500 businesses were compromised by the recent ransomware attack that has ricocheted around the world.
The software vendor said in a statement that approximately 50 of its direct customers were breached in the attack that began to unfold on Friday. But hundreds more companies were affected because many of Kaseya’s customers provide IT services to small businesses such as restaurants.
“Our global teams are working around the clock to get our customers back up and running,” Kaseya CEO Fred Voccola said in the statement. “We understand that every second they are shut down, it impacts their livelihood, which is why we’re working feverishly to get this resolved.”
Kaseya said that it has met with US government agencies including the FBI and the Cybersecurity and Infrastructure Security Agency. It said it had also engaged with the White House and cybersecurity firm FireEye Mandiant.
Who’s behind the attack? An analysis of the malicious software by the cybersecurity firm Emsisoft shows that it was created by REvil, a ransomware gang which is believed to operate out of Eastern Europe or Russia.
CNN reported on Monday that REvil has demanded $70 million in Bitcoin in return for a tool that would restore the businesses’ data.
In an interview with Reuters, Voccola would not say whether Kaseya will pay the hackers. “No comment on anything to do with negotiating with terrorists in any way,” the CEO said.

In India, the rich get richer

India has been hobbled by an economic slump and a brutal wave of coronavirus that new research shows pushed millions of people into poverty.
But as these Indians struggle to live on a few dollars a day, the country’s ultra-wealthy have gotten even richer and more influential, my CNN Business colleague Diksha Madhok reports from New Delhi.
The details: Mukesh Ambani — chairman of the sprawling conglomerate Reliance Industries — is now worth more than $80 billion, some $15 billion more than a year ago, according to the Bloomberg Billionaires Index. Not far behind him is Adani Group founder Gautam Adani, whose wealth skyrocketed from less than $13 billion this time last year to $55 billion today.
The two men are worth more than the GDP of some nations. Their diverging fortunes with fellow Indians are symbolic of a rising wealth gap that has hammered many across the world, and which has become particularly pronounced in Asia’s third largest economy.
The utter dominance of Ambani and Adani isn’t surprising, according to Saurabh Mukherjea, founder of Marcellus Investment Managers. He added that almost every major sector in India is now ruled by one or two incredibly powerful corporate houses.
“The country has now reached a stage where the top 15 business houses account for 90% of the country’s profits,” Mukherjea told CNN Business.
The ISM Non-Manufacturing Index for June will be released at 10:00 a.m. ET.
Coming tomorrow: Minutes from the Federal Reserve’s June meeting will be published. Plus, fresh data on US job openings.

Countries in Asia are placing orders for a new drug to treat coronavirus. Poorer nations could miss out again

Using an automated chemistry lab to find the origin of life