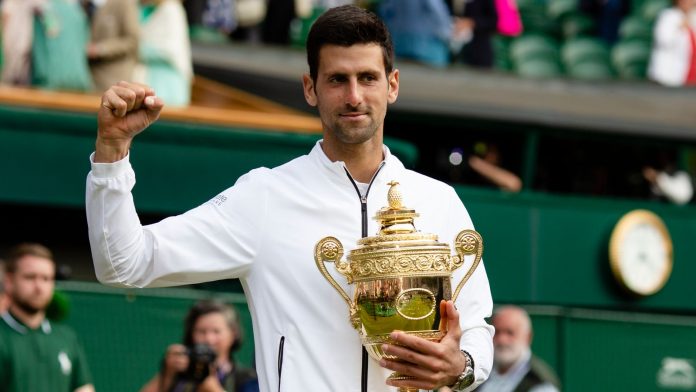 Denis Shapovalov, Felix Auger-Aliassime, Matteo Berrettini, Hubert Hurkacz, Marton Fucsovics and Karen Khachanov put their emerging status up against the might and history of Roger Federer and Novak Djokovic on men’s quarter-final day at Wimbledon

By Paul Prenderville at Wimbledon

Novak Djokovic and Roger Federer have sights set on cementing their legendary status at Wimbledon – but six new names are in the last eight with ambitions of their own.

As is customary in Grand Slams in recent history, there will be at least two of the sport’s big three in action on quarter-final day at Wimbledon on Wednesday as for the second day in succession, the championships welcome a capacity crowd to the show courts.

As sport creeps ever closer to normality, the presence of Federer and Djokovic in the last eight – particularly at Wimbledon – could scarcely be more normal – the pair have 30 quarter-finals between them in SW19, the other six players have not a single one between them.

In fact Marton Fucsovics, Felix Auger-Aliassime and Hubert Hurkacz are at this stage of a Grand Slam for the first time, Denis Shapovalov and Karen Khachanov each have one Slam quarter-final appearance and Matteo Berrettini is the flag bearer with two appearances at this stage of a major.

On Tuesday, in the women’s quarter-finals, where similarly six of the eight names remaining were tasting quarter-final action for the first time, it was largely experience that prevailed – it’s hard to see beyond that again given Federer and Djokovic’s pedigree.

In a sport consumed by facts and figures, numbers barely do the whole Federer-Nadal- Djokovic debate justice.

For every landmark set, there’s another to be beaten – usually by one of the other two – the number 20 looms particularly large at the All-England Club as Djokovic aims to join his great rivals on that total at the head of the list.

While Rafael Nadal can do nothing about it given his absence, Federer can and a first Grand Slam title since the Australian Open in 2018 can give him breathing space over the world No 1 on the all-time list.

But Djokovic is proving to be a force of nature. Since Federer’s 20th title in Melbourne, Nadal and Djokovic have won 11 of the last 12 Grand Slams titles (Djokovic 7, Nadal 4) with Djokovic’s seven coming in the last 11 Slams.

Federer has missed four majors and reached just one more final, but if there is anywhere that lights his candle it’s Wimbledon and Centre Court. On each of his last six visits he has made the last eight with three runners-up finishes and one title, his eighth at the event, in 2017.

The Swiss great was excellent in dismantling Lorenzo Sonego, and given he turns 40 next month he is tending to pick his moments to strike. He is already the oldest man in the Open era to reach the Wimbledon quarter-finals, and there has been a smile on his face every time he has sauntered into the press room – he seems to be enjoying himself.

“When you are me, with the year I had, it’s all question marks all over the place. You have to prove it again to yourself that you can actually do it.

“I was willing to take losses for the sake of information, just to be out there, get the body in shape for hopefully when Wimbledon comes around that I can actually wake up in the morning and feel alright, that I can still go out and play five sets.

“I feel that way, so it’s very rewarding and it’s a good feeling, now we’ll see how much more I got left in the tank. “

But Djokovic has a streak of his own, he is unbeaten at Wimbledon since a quarter-final defeat to Tomas Berdych in 2017, he is on an 18-match winning streak that features two titles – one of which was that epic victory over Federer in 2019.

Adding to that is Djokovic’s position to land not only a calendar-year Grand Slam having won in Australia and France already in 2021, but with the Olympics a few weeks away he could become just the second person to win all four majors and a gold medal in the same year – Steffi Graf (1988) is the pub quiz answer you’ll be needing.

‘They are the greatest of all-time…..all of them’

The first obstacles facing the pair are probably the most unlikely of the other six quarter-finalists.

“I think the big three, I’m talking about Federer, Nadal, Djokovic, I think they are the greatest of all time, all of them, all three of them. For me there is no difference between them. When I play against these guys, of course it’s a pleasure for me, they bring out the best of me, and I think I can improve my game when I play against them.”

Federer faces Hubert Hurkacz, the unheralded Pole who may not have any Grand Slam pedigree to speak of but has climbed to a career-high 18th in the world during a season where he has claimed his first ATP Masters 1000 title with victory in Miami.

Despite winning just a solitary game between that triumph in Florida and Wimbledon, the 14th seed had not dropped a set on his way to a showdown with world No 2 Daniil Medvedev where he rallied from 2-1 down to shock the Russian and continue his best ever performance in a major.

“Roger is a special player. I mean, what he’s achieved throughout his whole career, it’s unbelievable,” he said on Tuesday when asked about his next match.

“Being out there playing quarter-finals against him, it’s really amazing. But obviously I’m out there to play my best and give myself the best chance of winning the match. He was a big inspiration for me. I mean, the success that he had, the way he played, how he plays in the important moment, it’s really special.”

While Hurkacz can draw on some high-profile progress, Hungary’s Fucsovics doesn’t quite have the growing pedigree, until this week when his arrival at this stage makes him the first man from his country to reach the quarter-finals for 30 years.

Another enjoying his best-ever showing in a Slam, the world No 48 has seen off Jannik Sinner, Diego Schwartzman and Andrey Rublev – all top 20 players in the world – on his way to the last eight.

“I worked very hard for it. I wasn’t born like this. I was working every day to get this physique,” Fucsovics told the media after his win on Monday.

“Against Novak, against the top guys, you cannot tell the winning strategy. I will go out there and try to enjoy every moment, fight for every point. That will be most important.”

Who else is chasing a semi-final spot?

The other two quarter-finals represent the ultimate opportunity for four names who have been knocking on the door and like Dominic Thiem, Alexander Zverev, Stefanos Tsitsipas they represent the next generation, those meant to dethrone the big three about five years ago.

Karen Khachanov and Matteo Berrettini are at the slighter older end of the scale – both aged 25 – while the Canadian pair of Denis Shapovalov and Felix Auger-Aliassime are the brightest of talents.

📸 by the inimitable Tom Tebbutt pic.twitter.com/uRiyFrpmsB

In 2017, as a wild card, Shapovalov produced a brilliant display as a teenager to reach the semi-finals of the Montreal Masters. He thrilled the crowd, conquered Nadal and ultimately came up short.

Despite flashes, progress had stalled since then until now. He made the quarter-finals of the US Open last year, and now the 22-year-old has repeated the feat at Wimbledon where he has blown away his last two opponents, including Andy Murray.

The 10th seed has all the shots and a vastly improved serve and he’ll be a favourite to beat Russia’s Khachanov, who has returned to the sort of form that earned him a Masters title in 2018.

He came through an arduous contest with Sebastian Korda on Manic Monday, but a first Grand Slam semi-final is the prize if he can continue his run having reached the last eight a Roland Garros in 2019.

The other Canadian in the draw is Auger-Aliassime, aged just 20 and seeded 16th he is the youngest quarter-finalist since Nick Kyrgios in 2014. He saw off Kyrgios when the Australian had to retire from their third-round match, and he followed it up by winning his first-ever five-set match to reach the last eight.

Having won the first two sets against fourth seed Alexander Zverev, Auger-Aliassime held off a storming Zverev to set up a showdown with Berrettini who underlined his pedigree on grass when he won the title at Queen’s.

Berrettini’s huge serve and massive forehand may be too much for Auger-Aliassime to handle and the Italian seventh seed is rightly regarded as perhaps the biggest threat to Federer in the bottom half of the draw – and perhaps the most likely to stop Federer or Djokovic.

Six players looking to make their mark and two legendary figures out to cement a legacy, the stage is set in south west London as a thrilling and potentially seismic day awaits.