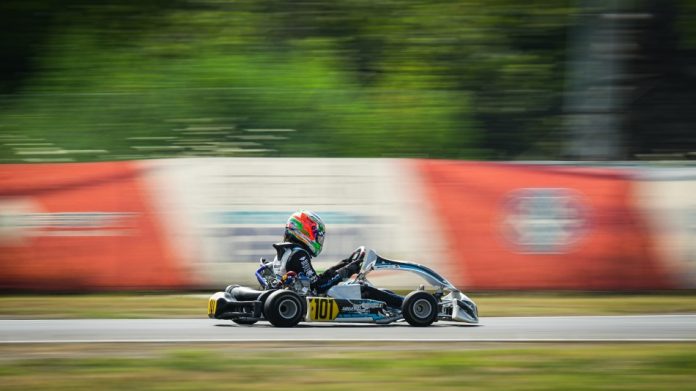 On the new Sarno track, qualifying for the third round of the FIA Karting European Championship – OK & Junior took a special turn in the heat, with large gaps between some of the competitors and some surprises in the results. James Egozi (ITA) was the fastest of the 87 OK-Junior drivers, while Andrea Kimi Antonelli (ITA) took pole position among the 62 OK drivers.

As expected, the temperature was high in the Naples area on Friday afternoon, July 9th. The air was close to 35° and the asphalt was not far from 50°. After Thursday’s intensive driving and the 16 free practice sessions on Friday, the grip of the track was high, especially when following the most used line, as its surroundings offered less adherence. There was no room for approximation on the new Sarno track.

Whether it was a strategic imperative or a simple trend, the late entry on to the track during qualifying sessions is now a reality. The eight minutes allotted are far from being used, one or two fast laps being generally enough to classify the drivers without leaving them the opportunity to make mistakes.  If the best times were close, the gaps could widen in the rest of the ranking.

Egozi creates a surprise in Junior

The provisional leader of the FIA Karting European Championship – Junior Freddie Slater (GBR) was the fastest in the first qualifying session with a time of 56”176. Yevan David (LKA) surprised with his time of 56”180 in the second session, ahead of a newcomer to the category, Antonio Apicella (ITA). Jan Przywoski (POL) was slightly behind in the third session, but his teammate James Egozi (ITA) finally took pole position in the last session with 56”106, 7 hundredths faster than Slater. Amongst the other drivers in the provisional top five of the Championship, Matheus Ferreira (BRA) was in a good position in 6th position, Alex Powell (JAM) was 8th, but Ean Eyckmans (BEL) was 28th and Kirill Kutskov (RUS) 48th.

Antonelli masters his domain in OK

Currently third in the provisional standings of the FIA Karting European Championship – OK, Andrea Kimi Antonelli (ITA) managed to beat the leader of the first session and second in the Championship Arvid Lindblad (GBR) by 83 thousandths in Session 2. Artem Sevriukhin (RUS) dominated Session 3 and Tymoteusz Kucharczyk (POL) the fourth. With Joe Turney (GBR) 5th, Brando Badoer (ITA) 6th and Nikola Tsolov (BGR) 7th strong protagonists were going to be competing in the qualifying heats. The provisional leader of the Championship Rafael Camara (BRA) would have to come back from his 16th position, as well as Juho Valtanen (FIN) from the 28th, to stay well placed in the chase for the title.

Provisional programme of the Sarno race

The Sarno competition can be followed on the official FIA Karting Championship app for mobile devices and on the website www.fiakarting.com.