Home Sport Djokovic through to Wimbledon showdown with Berrettini 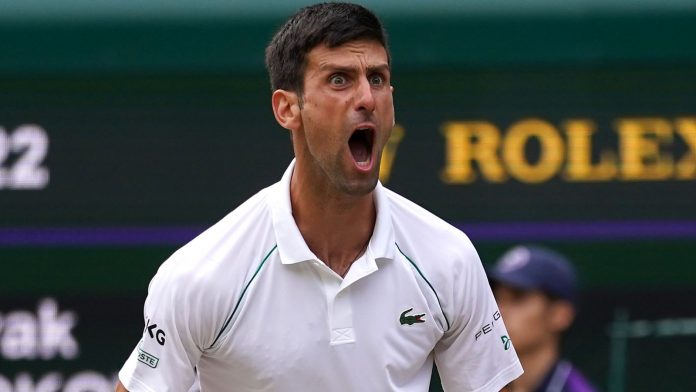 Novak Djokovic makes it seven wins in a row against Denis Shapovalov to reach Sunday’s Wimbledon final against Italian Matteo Berrettini; the world No 1 is into his seventh final at the All England Club, equalling Boris Becker, Arthur Gore and Pete Sampras on the all-time list

By Raz Mirza at Wimbledon

On his 16th consecutive appearance at the All England Club, the world No 1 and top seed reached his seventh Wimbledon final after defeating 22-year-old Shapovalov, making his Grand Slam semi-final debut, 7-6 (7-3) 7-5 7-5.

It means the Serb, who has already claimed the Australian Open and Roland Garros titles this year, is through to his 30th Grand Slam final where he will go up against Italian seventh seed Matteo Berrettini.

Djokovic now has his sights set on a third consecutive Wimbledon triumph, as well as equalling Roger Federer and Rafael Nadal’s record for most Grand Slam men’s singles titles, when he walks out on Centre Court this Sunday.

On the cusp of 20 and not short on emotion 😤💪🗣️ pic.twitter.com/fTSGNQiXwD

Djokovic has yet to hit top gear this fortnight but he has only dropped one set – his first match of the tournament against British teenager Jack Draper – and is one win away from his own piece of history.

He said: “I don’t think the scoreline says enough about the performance and about the match. He was serving for the first set and was probably the better player for most of the second set.

“I would like to give him a big round of applause. This has been his first semi-final of a grand slam. You could see he was emotional. We’re going to see a lot of him in the future, definitely.

“Particularly at this stage of my career, the Grand Slams are everything really. I have to balance that with trying to be present and in the moment and focus only on the next match.”

Not too bad 😁 @DjokerNole pic.twitter.com/Xax1IJBHgq

Djokovic was well off his usual standards at the start of the match, dropping serve on a blistering Shapovalov backhand.

The 10th seed’s one-hander is one of the game’s great crowd-pleasing shots, and it has worked brilliantly this tournament, especially in his third-round victory over Andy Murray.

Shapovalov won 15 points in a row on serve until he came to serve for it at 5-4. He recovered well from 0-30 but at 30-30 he missed a forehand with the court gaping, and Djokovic broke back.

Djokovic played a shaky tie-break, including a double fault, but Shapovalov did not win a single point on his own serve and ended with a double fault of his own.

Shapovalov had golden chances to break at both 2-1 and 3-2 in the second set with Djokovic at 0-40 and 15-40, but again he could not take them, his spectacular shots choosing the worst moments to misfire.

The Canadian cracked on serve at 5-5, another untimely double fault giving Djokovic the chance to serve for the set, which, unlike his opponent, he did not pass up.

Shapovalov channelled his frustration into an argument with the umpire as he saw his Wimbledon final dreams ebbing away.

The world No 1 saved three more break points – he fought off 10 of 11 across the match – in the second game of the third set.

Shapovalov at least showed grit of his own on the defensive in the third set, saving break points at 1-1 and 3-3 with brave hitting but his resistance ran out in the 11th game before Djokovic booked his spot in a 30th major final.

Raising his level on the biggest stages. 📈 pic.twitter.com/Tgwkcpnzkq

British hopes in the junior singles tournaments ended with defeat for seventh seed Jack Pinnington Jones in the quarter-finals.

The 18-year-old returned to Court Three having won his third-round clash earlier on Friday but was beaten 4-6 6-4 6-3 by American Victor Lilov.