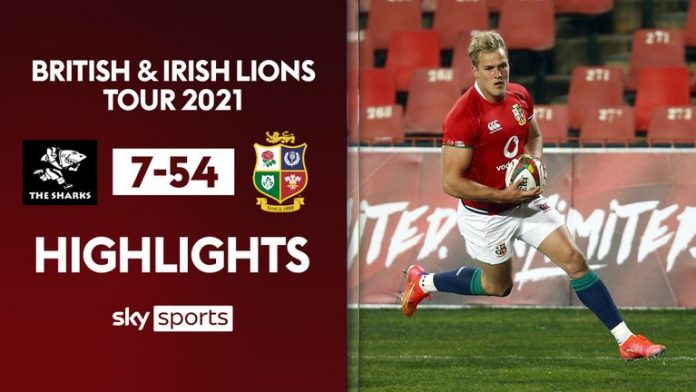 Warren Gatland says the Lions could face the Stormers on Wednesday instead of South Africa ‘A’ to give the Springboks more time to recover from their Covid-19 outbreak; Gatland ‘pretty sure’ second and third Tests against South Africa will be played in Cape Town

The British and Irish Lions tour faces more upheaval after Warren Gatland revealed that next week’s opponents could swap places to give South Africa more time to overcome their Covid-19 outbreak.

Fresh from seeing the Bulls replaced by the Sharks for Saturday’s fixture at Loftus Versfeld, plans are having to be revised for fixtures five and six of the tour.

Instead of facing South Africa ‘A’ on Wednesday and the Stormers three days later, they are set to trade slots as the Springboks look to halt the spread of coronavirus through their camp.

The Lions depart for Cape Town on Sunday and Gatland also indicated that the final two Tests are highly likely to be moved from Johannesburg to the coastal city that hosts the series opener on July 24.

“We’re not 100 per cent sure who the opposition is going to be next week so it’s a little bit difficult to plan too far ahead,” said Gatland.

“It’ll either be the Springboks ‘A’ or the Stormers. They might switch those games around. That’s hasn’t been confirmed. Hopefully in the next 24 hours we’ll know which way those games go.

The Lions were convincing winners over the Sharks on Wednesday

“I’m pretty sure the second and third Tests will be played in Cape Town. That’s my understanding at the moment.

“Until they give us 100 per cent confirmation we just have to wait and see. I think they’re definitely going to be in Cape Town.”

The Lions have been cleared to face the Sharks for the second time in four days after the player who tested positive on Wednesday returned two successive negatives, enabling him and his close contacts to leave isolation.

However, the touring party faces being split as the unnamed member of the management team who was infected remains in quarantine along with his close contacts, comprising of one player and three staff.

When the Lions leave for Cape Town, the five will be left behind in Johannesburg until they are able to follow the main group out of Gauteng.

Jamie George has been named captain of the side that will meet the Sharks, 14 of whom must back up after Wednesday’s 54-7 win at Emirates Airline Park.

George becomes the first Englishman to lead the Lions since Phil Vickery in 2009 and the first Red Rose hooker to secure the honour. The 30-year-old Saracen insists the difficulties facing the tourists have had a galvanising effect.

“The last week or so has been relatively different but I’ve been so impressed with the boys,” said George.

“I just feel like whatever hostility comes our way, it manages to bring the group closer together and you saw that in the way that the guys on Wednesday night fronted up.

“Preparations haven’t been ideal for Saturday, but at the same time if you were at our team run today (Friday) you’d be pretty excited about what’s going to come on.”

Gareth Davies and Dan Biggar were the intended half-backs for the first meeting until they were forced to quarantine but they start at Loftus Versfeld, with scrum-half Davies and wing Anthony Watson making their first starts of the tour.

Only Elliot Daly and Duhan van der Merwe are retained from the XV scrambled together on Wednesday.