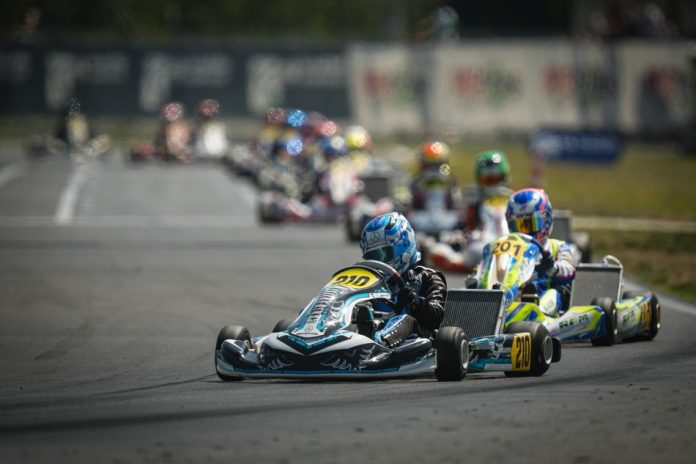 The temperatures were less challenging than the day before in Sarno on Saturday, when the majority of the qualifying heats for the third round of the 2021 FIA Karting European Championship – OK and Junior were held. Although the thermometer hardly broke the 30° limit, it is easy to imagine that it was much hotter under some of the helmets. Twenty starts were given and five heats remain to be run on Sunday morning before the Finals. Alex Powell (JAM), James Egozi (ITA) and Anatoly Khavalkin (RUS) were the strong men in the OK-Junior class with three different chassis and three different engines. In OK, Artem Severiukhin (RUS) and Nikola Tsolov (BGR) outperformed the predictions.

The selectivity of the Sarno circuit was reinforced by the intensity of the sporting confrontations in most races. The battles that took place at all levels did not spare some of the favourites, while several drivers revealed a potential that had been hidden until then. On Saturday evening, the outcome of the competition remained very uncertain, while the positions in the provisional standings of the two Championships seemed likely to undergo significant changes depending on the current situation. The battle between the teams, chassis and engine manufacturers has not been this open for a long time.

But the struggle is far from over in this fast-paced qualifying phase, which will end at midday on Sunday after each driver has completed one more heat.

Powell, Egozi and Khavalkin neck and neck in the Junior class

On Saturday evening, the qualifying heats of the FIA Karting European Championship – Junior featured three drivers. American-Italian poleman James Egozi had won three races in a row before being beaten in the last heat. Jamaican Alex Powell took a slight advantage thanks to two victories and a great consistency in the top three while Russian Anatoly Khavalkin made an impressive comeback to the front. Douwe Dedecker (BEL) and Matheus Ferreira (BRA) remained well placed ahead of the surprising Yevan David (LKA). William Macintyre (GBR) had a very positive day after getting the better of Jan Przyrowski (POL), who was delayed in his first run. Oleksander Bondarev (UKR), who started from 22nd position in Qualifying, made a remarkable entry into the top 10 with Ean Eyckmans (BEL) in his wake.

Kirill Kustov (RUS), fifth in the provisional Championship standings, had made up a good part of his deficit from qualifying by coming back not far from the top 10 behind Rashid Al Dhaheri (ARE) and Harley Keeble (GBR). But the most significant twist was the retirement of provisional leader Freddie Slater (GBR) on the penultimate lap of his second heat as he tried to take third place from one of his team-mates. The incident could have significant consequences for the title.

Two drivers battled it out from a distance before finishing the day with a perfect score and three wins each. Russia’s Artem Severiukhin and Bulgaria’s Nikola Tsolov beat the favourites of the FIA Karting European Championship – OK to win. They will only compete directly on the track in the very last heat on Sunday morning. With a victory, Tymoteusz Kucharczyk from Poland was able to overtake Andrea Kimi Antonelli from Italy and Arvid Lindlad from Britain. These last two rivals are all the more involved in the top three of the Championship as the current leader, Brazilian Rafael Camara, has just climbed back into the top 10 on Saturday evening, behind Joe Turney (GBR) and Martinius Stenshorne (NOR). As in the Junior class, three makes of chassis and three engines will compete at the front of the heats.

Provisional programme of the Sarno event

The Sarno event can be followed on the official FIA Karting Championship app for mobile devices and on the website www.fiakarting.com.