Home World A crane fell on top of a building in downtown Toronto, causing... 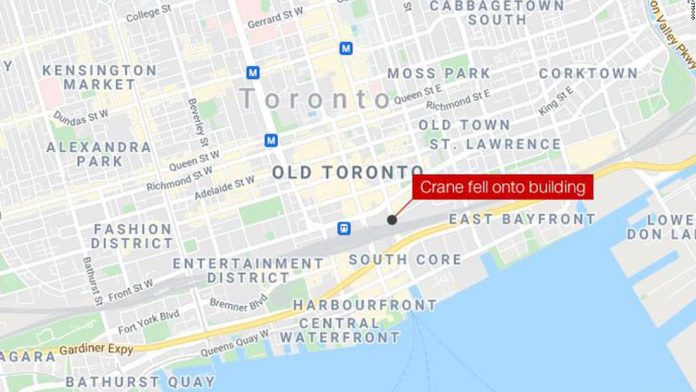 The counterweight, part of the crane meant to prevent it from tipping, was located on top of the 8 The Esplanade residential building after it fell approximately 20 feet, Toronto Fire District Chief Stephan Powell told CNN.
Authorities were alerted to the incident at the intersection of The Esplanade and Yonge Street just after 2 p.m., he added.
The top six floors of the condominium are mechanical rooms used for building maintenance, so no residential units were damaged, according to Powell.
The crane was carrying about 20,000 pounds of counterweight, which shifted, resulting in the crane tipping over, Toronto Fire platoon chief Kevin Shaw told CNN newsgathering partner CTV News.
“This crane collapse [caused] a bit of structural damage on the roof area, but no danger to any of the floors below, tenants or anything and didn’t get into any the apartment unit,” Shaw told CTV.
No damage was caused to the Meridian Hall performing arts center, which is connected to the building, Toronto Police said on Twitter
City structural engineers were on site assessing the damage caused by the crane, Powell said, adding that no injuries were reported.
CNN has reached out to Del Property Management, which owns 8 The Esplanade, for comment.