Home Sport Wigan rally from 12 points down to beat Giants 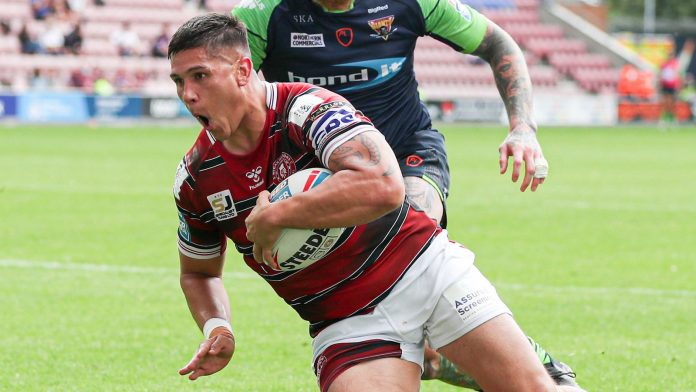 Converted Huddersfield tries for Chris McQueen and Leroy Cudjoe put the Giants 12-0 up after 14 minutes at Wigan; Liam Marshall (38) scored a try for Wigan late in the first half, before second-half Warriors efforts from Mitch Clark (48) and Harry Smith (62) completed the comeback win

Wigan claimed their first Super League win since May as they came from behind to beat Huddersfield 16-12 and end a run of five consecutive defeats.

Two tries in the space of four first-half minutes from Chris McQueen and Leroy Cudjoe put Huddersfield 12-0 up, before Liam Marshall got Wigan on the board before half-time.

Wigan were a different outfit after the break and tries from Mitch Clark and Harry Smith finally put a smile back on head coach Adrian Lam’s face.

Wigan started well with Jackson Hastings chiming into the attack quite frequently and they went close when Oliver Gildart was held inches short of the line on the last tackle.

The Giants opened the scoring in the eighth minute against the run of play when Australian McQueen barged over for his fourth try of the campaign.

Soon after Jake Wardle sent a kick to the corner and Olly Ashall-Bott tipped the ball out of Gildart’s grasp and sent Cudjoe over for their second try, with Oliver Russell again converting.

Wigan then wasted a glorious opportunity to get back into the game as Jake Bibby’s offload to Umyla Hanley found the ground, and after play was brought back for a Warriors penalty a huge hit from Josh Jones saw Brad Singleton drop the ball short of the line.

Warriors thought they had their breakthrough when Hastings sent out a cut-out ball to Marshall and the winger looked to have expertly touched down in the corner, but it was ruled out by video referee James Child after footage showed his hand was in touch before he grounded the ball.

Wigan finally got on the scoresheet when Marshall reacted quickest to Smith’s kick to touch down and Smith converted.

Wigan looked a lot better at the start of the second half and they cut the deficit to two points when Joe Shorrocks put Clark through a massive gap to cross over for his first try for the club, but Smith’s conversion attempt hit a post

The hosts were on top and Gildart made a break down the left and moments later went close. Huddersfield were finding it difficult to get out of their own territory as they clung on to the lead.

But Wigan took the lead just after the hour mark as Hastings put Farrell through a gap and he made a break down the left, before finding the supporting Smith on his inside.

Smith added the conversion to his own score and the Warriors held on to end their losing run.