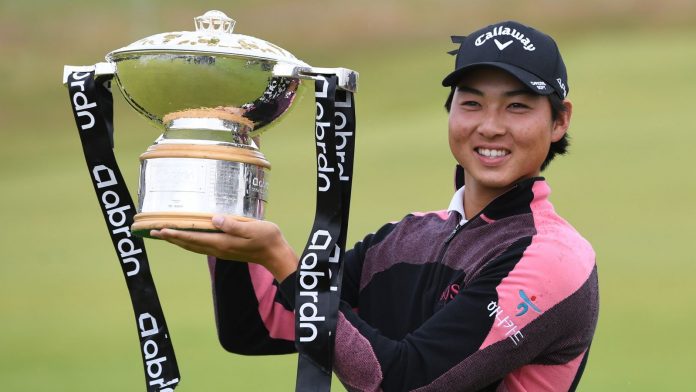 A birdie at the first play-off hole earns Min Woo Lee his second European Tour title at the abdrn Scottish Open, while he also secured a place in the field for The 149th Open at Royal St George’s

Min Woo Lee birdied the first extra hole to win the abrdn Scottish Open after a play-off with the luckless Matt Fitzpatrick and Thomas Detry.

Lee was a roll short of making birdie at the 18th in regulation following a weather delay of 90 minutes as he closed out a 64 which featured a sensational run of six consecutive birdies in an outward 30.

The 22-year-old Australian tapped in for par to assume the clubhouse lead ahead of Ian Poulter, who had earlier birdied four of the last five holes to card a superb 63 and race to 17 under par, two ahead of playing partner and world No 3 Justin Thomas.

Ryan Palmer (64) and last week’s Irish Open champion Lucas Herbert (66) were both unable to birdie 17 or 18 as they finished level with Poulter, and world No 1 Jon Rahm parred the final eight holes to leave Fitzpatrick and Detry as the only players remaining who could deny Lee his second European Tour title.

Detry was unfortunate to have been distracted by the klaxons signalling the suspension in play just as he was putting for par on the 14th green, and the Belgian returned after the delay to tap in for bogey before both he and Fitzpatrick made excellent fours at the long 16th.

Fitzpatrick missed from mid range for birdie at the 17th, and he gave himself a putt for the outright win at the last only for his 20-foot effort to drift left of the cup, while Detry did well to get up and down from over the green.

Watch every day of The Open live, only on Sky Sports

Get Sky Sports today from just £18 extra a month.

After the final pair had both signed for 67s, they returned to the 18th tee along with Lee for the play-off in damp and grey conditions, and the approaches of Fitzpatrick and Detry came up short and right and around 40 feet from the flag.

Lee then hit a confident second to 10 feet and, after Fitzpatrick had left his birdie try a foot short, the young Australian rattled in his putt for victory.

While Lee celebrated, Fitzpatrick was left to contemplate the devastating impact of the weather delay which effectively scuppered his hopes of making it to Wembley in time for England’s Euro 2020 final against Italy.

Consolation for Detry, meanwhile, was a place in the field for The 149th Open at Royal St George’s along with Lee and Jack Senior, who closed with a 66 to finish as the third non-exempt player for the final major of the year.

GolfPass is now available on Sky Q with an exclusive offer for Sky VIP customers. Click here to find out more…