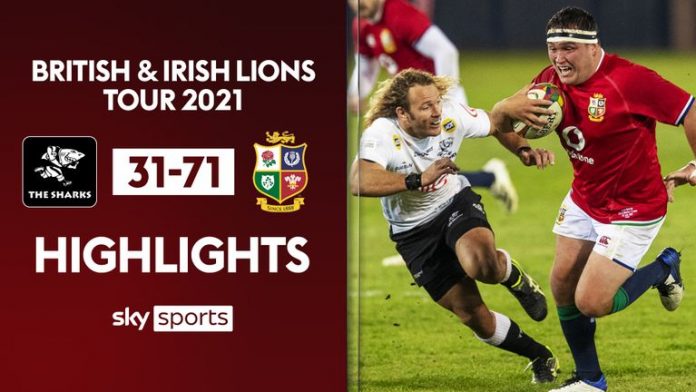 Sky Sports Rugby speak to 124-cap former Springbok Bryan Habana to get his thoughts on the South Africa ‘A’ team picked, Lions performances vs the Sharks, Marcus Smith’s call-up, standout backs and forwards, emerging Lions combinations and his prediction for SA ‘A’ vs Lions on Wednesday.

Springbok legend Bryan Habana pens his second column during this British and Irish Lions tour, looking at the South Africa ‘A’ team, the Lions’ recent wins over the Sharks, Marcus Smith’s call-up, standout players and more…

“It’s confusing what exactly is being meant by South Africa ‘A’ at the moment!

“It’s an incredibly strong team which has been put forward, and looking at the Lions team you can start to see a bit of a Test team spine emerging.

“For South Africa ‘A’, there’s the likes of Steven Kitshoff, Trevor Nyakane, Etzebeth and Mostert – who I think will be the starting locks for the Test series.

“Jasper Wiese has been playing incredibly well in the Premiership. Pieter-Steph du Toit was phenomenal against Georgia.

“And then in Faf de Klerk, Damian de Allende, Lukhanyo Am, Cheslin Kolbe and Willie le Roux, there is a big contingent of Test players to start vs the Lions 10 days later.

“All of which means we’re going to see a pretty spicy game on Wednesday evening. Which is great for the tour, given all the disruption and confusion over the course of the last 10 days.

“To now have a match where it does seem like it is going to be pretty competitive is incredibly exciting.”

Habana assesses the Lions’ two comfortable victories over the Sharks…

“I do think it’s important just from a UK and Ireland perspective to give a bit of context to the actual rugby landscape of South Africa at the moment.

“You’ve got 40-odd players in Springbok camp, of which we know last week there was quite a few Covid cases, which threw a spanner in their own preparations. But there is also a Currie Cup on the go at the moment.

“Given that the teams have been playing against each other and that the Bulls weren’t able to be available for that game, it does make understanding the situation a lot easier.

“If you take out your 45 best players from South Africa and overseas, and you have Currie Cup going on, it means resources are just stretched.

“So admittedly, the Sharks were not the toughest opposition for the Lions.

“The first 45 minutes in particular of Saturday’s second game vs the Sharks would really have tested the Lions players, more mentally than anything else given what’s happened, and I think we potentially saw that.

“And if that Sharks red card hadn’t have happened – and it is all ifs and buts, and we can all be Nostradamus’s’ – you felt there would have been a lot of questions posed, despite Warren Gatland probably taking a lot of positives in the end from an eventual rout.

“Yes, it’s not the strongest opposition, but understanding the context around it and that they are not facing the strongest sides they could, the Lions have dealt with that appropriately.”

“A big name for me, and we probably all saw him as a bolter originally, is Duhan van der Merwe.

“Gatland has got an incredibly difficult, but pleasing situation ahead in terms of who he selects for his back three.

“It looks as if Josh Adams has done enough to cement his place, whether on the left or right-wing, and I sort of feel that Anthony Watson moving to full-back this week is just Gatland looking at a bit of versatility.

“I initially had Stuart Hogg, Watson and Adams in my back-three, but I think Van der Merwe is not just knocking on the door but he’s banging it down at the moment with his performances.

“He’s done his reputation the world of good. Coming to the soil of his birth and putting in some fantastic efforts.

“Dan Biggar for me at 10 probably wasn’t as impressive on Saturday, but I think he’s shown enough. And then Owen Farrell has got credit in the bank.

“Wednesday’s game is going to be exciting because Bundee Aki is someone I think Gatland is looking to, to get that go-forward. And if you go back to 2013 and 2017 with the likes of Jamie Roberts and Ben Te’o, Gatland likes that direct 12 channel.

“The back three is the part that I lean to, and the resources at Gatland’s disposal are very impressive.”

Habana on Robbie Henshaw’s injury and his slimming Test chances…

“It’s sad we haven’t seen Robbie Henshaw in South Africa up until now. I don’t quite know what that means for him.

“He is definitely running out of time. One doesn’t know the full extent of his injury unfortunately, but we did see him hiding BIL the Lion away from Louis Rees-Zammit.

“But you do feel as if he’s running a bit against the clock at the moment.

“Chris Harris, in fairness, has done phenomenally well, and Elliot Daly, who has only played two Tests at centre, does not look in any way uncomfortable there.

“I think 13 is probably a more complicated decision that Gatland will have to take. I really do believe Henshaw going into this tour was the standout and probably a Test shoo-in, whereas now it’s pretty touch and go.

“If he doesn’t get a crack against the Stormers on Saturday, you feel that unfortunately he’s going to find it really tough to get into a Test team.”

“I think it’s brilliant, and caps off a phenomenal 18-month period for Marcus Smith.

“I know Eddie Jones really rates him highly, and he’s got an incredible mentality of owning the 10 position.

“For a youngster to be bossing around the Mike Browns and Joe Marlers of the world, really does show that he means business.

“People are talking about the likes of a Ford or Sexton, who were potentially overlooked, but if you look at the current situation, though Smith is coming off a great season, he might not get used.

“But what an opportunity to learn off the likes of Dan Biggar, Finn Russell and Owen Farrell.

“His selection is just, his performance for England over the last two weekends have been pivotal, and it’s come off the back of a very impressive Premiership season with Harlequins.”

“There’s been a few. Hamish Watson has been incredible.

“I’ve seen a lot of him in the Six Nations and PRO14, but to actually see him live and literally see his dominance, has been superb.

“For his size, Watson reminds me a lot of Heinrich Brussow, who in the series that we had in 2009 was a guy on the periphery and came in to have an incredible impact.

“Tadhg Beirne again was pretty influential this past weekend, and in terms of his leadership and ball-skill ability has been a standout.

“Tom Curry and Josh Navidi have shown quality too, and you just don’t know, again, who Gatland is going to go with in the back-row.

“Is it going to be horses for courses against a Springbok pack that will be extremely physical up front?

“It’s a great conundrum for Gatland to be in with his loose forwards, when you’ve also got Taulupe Faletau, Sam Simmonds and Jack Conan.

“They are playing really good rugby, and you can almost see that Watson is loved in the Lions squad, and is even more fully deserving of his Six Nations Player of the Year award.”

Habana on the developing Lions combinations through the team…

“With this Lions group, there are only two matches left before a Test match. So you’re starting to think Gatland is looking at how to get things going.

“When you look at it, Conor Murray and Biggar at half-back and Maro Itoje and Iain Henderson as a lock pairing are combinations I think he will go with for the first Test.

“If one looks at Aki and Chris Harris, that is potentially a combination at this stage that Gatland is likely to go with.

“In the forwards, the second row of Itoje and Henderson looks to me, the Test match pairing. He’s giving the front row a good crack at seeing what they can do, and he’s testing some combinations out in the loose forwards.

“But 100 per cent, the side named is starting to look like the spine of a Test team.”

Habana’s prediction for South African ‘A’ vs Lions on Wednesday…

“I think the Springboks players will be going into this very rusty, unfortunately.

“Given we don’t really know practice-wise what they’ve been doing over the last 10 days.

“They have all been self-isolating. Does that mean they may have had Watt bikes in their room? There hasn’t been a collision potential for sure, so they’ve got a day and a half to prepare for a physically tough engagement.

“We will definitely see some fireworks. I think it will really be a true test for both teams in terms of physicality.

“We might see a lot less running rugby, and more collision-based rugby.

“With Morne Steyn at 10 for South Africa and Dan Biggar at 10 for the Lions, I think we will see a structural game.

“The Lions are testing combinations, but they are going to want to go out and show how far ahead they potentially are physically.

“And the Boks are going to need to dust off whatever cobwebs they have left, and show that they will be ready for the Test-series.”