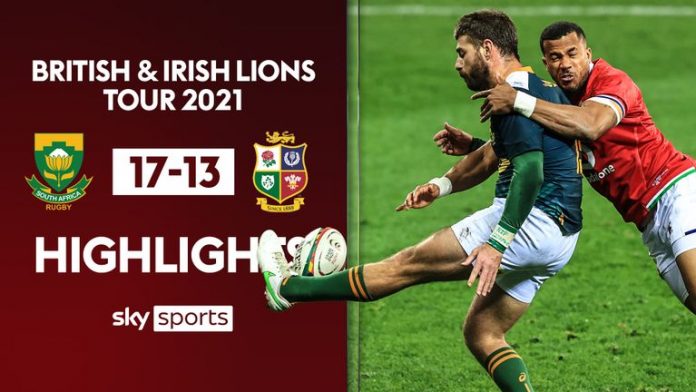 First-half converted tries from Sbu Nkosi and Lukhanyo Am help the Springboks’ A team secure victory over the Lions despite having two men sin-binned; The tourists hit back after the break through a converted try from Wyn Jones, but fell just short

The British and Irish Lions suffered their first defeat of this year’s tour on Wednesday evening as they went down 17-13 to a strong South Africa ‘A’ team at Cape Town Stadium.

Converted tries from Sbu Nkosi and Lukhanyo Am helped the Springboks’ A team into a 17-3 lead at the break, with a sole Owen Farrell penalty accounting for the Lions’ first-half tally despite both Faf de Klerk and Marco van Staden being sin-binned close to half-time.

Wyn Jones, who had a possible try ruled out at the end of the first half, forced his way over for the Lions’ try four minutes into the second half, with Farrell converting and then kicking a penalty to bring them within four points and set up an enthralling finish.

It was a tough, physical game but, as always, we end the day as friends 💪

But despite a much-improved showing after the break which saw them keep the South Africans scoreless and have another possible try from Louis Rees-Zammit chalked off by the TMO, the home side held firm and were able to see out the match for victory.

The Lions made two late changes to their starting line-up as Liam Williams replaced compatriot Josh Adams, who was watching the birth of his first child via Zoom – a move which also saw Anthony Watson shift from full-back to Adams’ spot on the wing.

Meanwhile, England captain Farrell came in at fly-half for Dan Biggar after the Welshman suffered a minor ankle sprain and head coach Warren Gatland decided not to risk him.

The strength of their opponents in Cape Town was underlined by the fact the starting XV had a combined 522 Test caps between them and the squad featured a total of 16 World Cup winners in matchday 23.

The hosts gave a glimpse of the dangers posed inside the first five minutes with an attack which saw Nkosi forced into touch by Watson before he could get the ball down. However, South Africa A were first to score when Morne Steyn kicked a penalty soon after.

Nkosi did get over in the 12th minute too, finishing off a counter-attack. It began when Farrell had a kick charged down by Eben Etzebeth with the Lions attacking on the edge of the South African 22 followed by Damien de Allende recovering the ball and sending the winger racing away to finish.

A penalty won at a scrum deep in their own 22 helped the Lions get into a position to register their first score of the match as Farrell landed a 28th-minute penalty, but they were punished again when a poor clearance kick was snaffled by Cheslin Kolbe.

The winger showed his pace and footwork to squeeze through a gap and then his offload in the tackle released outside centre Am to race away and finish for a second converted try.

The Lions rallied after this though and were denied a try by some solid South African defence, but the home side soon found themselves down to 13 men after De Klerk was sin-binned for foul play swiftly followed by Van Staden joining him on the sidelines for repeated infringements.

Even so, the tourists were unable to breach the line before the break as Wyn Jones had a possible score ruled out for a double movement. However, the pressure told when four minutes into the second as the Welsh prop tapped from a penalty and forced his way over from close range.

Farrell’s conversion cut the deficit to seven points and he landed a penalty from 40 metres out six minutes later to keep chipping away at the lead. However, they were denied a second try when the TMO ruled out an effort from Rees-Zammit for playing the ball on the ground after the Lions had worked an attack through 13 phases.

Steyn then missed a penalty at the other end of the field as the clock ticked past the hour mark and saw a drop goal attempt go wide of the mark in the 74th minute, with the Lions pushing right to the end in a bid to snatch victory.

A knock-on by Zander Fagerson as the Lions were attacking late on looked to have ended any hope of grabbing the win at the death, although the final scrum saw De Klerk fumble the ball before replacement Damien Willemse hacked it into touch to bring the game to a close – much to the relief of the Springboks.