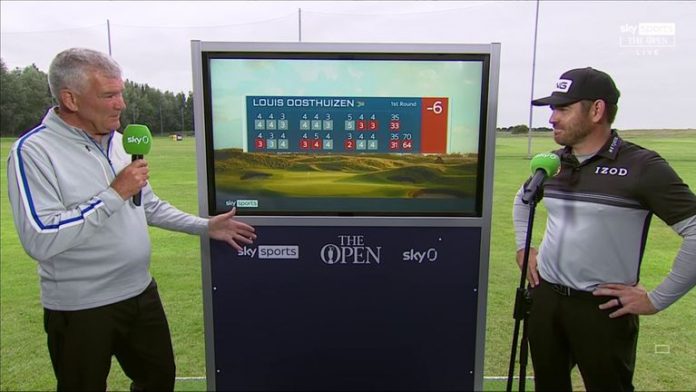 After two major runner-up finishes this year, Louis Oosthuizen is on course to go one better after a six-birdie 64 earned him the first-round lead in The 149th Open at Royal St George’s.

Louis Oosthuizen savoured a “perfect” start to The 149th Open as he fired a 64 to claim the first-round lead ahead of Jordan Spieth and Brian Harman at Royal St George’s.

Oosthuizen, determined to avoid a seventh runner-up finish in a major championship, and his third in row this year, made six birdies and handed in a bogey-free scorecard to set the pace on day one in bright but blustery conditions at the Sandwich links.

Spieth, playing his first event since the US Open last month, put fears of competitive rust behind him as he recovered from an early mistake with four straight birdies, and added one more in a solid back-nine that added up to a 65, a score later matched by left-hander Harman.

The English quintet of Justin Rose, Danny Willett, Tommy Fleetwood, Andy Sullivan and Jack Senior all made encouraging starts as they posted 67s, but it was another frustrating opening day in a major championship for Rory McIlroy, who failed to build on a bright start and had to grind hard on the back nine to return a level-par 70.

Oosthuizen finished two shots behind Phil Mickelson at the PGA Championship and was pipped to the US Open title by Jon Rahm at Torrey Pines last month, but he insisted the near-misses were an inspiration rather than a hindrance after putting himself in contention for a second Open victory.

The smooth-swinging South African, crowned Champion Golfer of the Year in 2010, made a cautious start to his 14th Open with seven straight pars before breaking that run with three birdies in a row, and further gains at 13, 14 and 16 took him into the outright lead.

“Probably, in my mind, it was the perfect round I could have played,” said Oosthuizen, whose clubhouse lead was not seriously under threat for the remaining six hours of play on day one. “I didn’t make many mistakes, and when I had good opportunities for birdie, I made the putts. So it was just a very good, solid round.”

Louis Oosthuizen refused to get carried away by his fast start at The 149th Open, where an opening-round 64 saw him top the leaderboard at Royal St George’s.

And when reminded of his seven runner-up finishes in majors since his lone win 11 years ago, he turned that statistic into positive motivation to go one better this week.

“It gives me confidence going into majors knowing that I’m still competing in them and I’ve still got chances of winning,” he added. “Once the week starts, I need to get that out of my mind and just focus on every round and every shot. But it definitely puts me in a better frame of mind going into the week.

“I’ve learned over my years playing major championships that patience is the key thing, and even if you make bogeys, you know that a lot of people are going to make bogeys. I was just very patient, trying to just hit my shots and I didn’t really hit anything close enough to make birdies those first few holes.

The 149th Open: Day one as it happened

“And then all of a sudden I made two good putts on eight and nine and got the ball rolling. It happened quickly, but you still need to put yourself in those positions, and I felt definitely the last 10, 11 holes I gave myself a lot of opportunities.”

Spieth defied his lack of tournament golf in recent weeks to briefly hold the clubhouse lead on five under until being surpassed less than an hour later by Oosthuizen, who comfortably outscored playing partners Rahm (71) and defending champion Shane Lowry, also one over for the day.

“The path that I’m on, and where I’ve been before in the game, I feel really good about my chances going forward, as good as they have been historically,” said the resurgent Spieth, who was perilously close to dropping out of the world’s top 100 in early February.

Former Open champion Jordan Spieth reflects on making a fast start to this year’s contest with an opening-round 65 at Royal St George’s.

“As far as surprised or not, I guess I feel like I’ve been trending the right way and certainly had a chance this year already at Augusta. I made some mistakes in the first and second rounds that I shouldn’t have made that I very well could have won that golf tournament this year.

“I like where I’m at. Again, I feel like I was progressing nicely, but took a couple steps back really on the weekend at Colonial through the US Open, and I know what it was now and tried to put in some good work over the last few weeks to get back on the same and even forward it from where I was already progressing.”

Harman raced to four under after just five holes and added a fifth birdie at the eighth, although he found the going tougher after the turn and needed a seventh birdie of the round at the last to match the score of Spieth, who was in the group ahead with Bryson DeChambeau and Branden Grace.

DeChambeau incurred the wrath of his club sponsors by declaring “my driver sucks” after he hit only four of 14 fairways in his 71 which left him outside the top 70 on a day of excellent scoring on a course purposefully made softer by the R&A.

Dustin Johnson, who reclaimed the world No 1 ranking from Rahm on Monday despite having last week off, opened with a solid 70 along with Viktor Hovland, Paul Casey, 2018 champion Francesco Molinari and Sergio Garcia, who needed a police escort to get him to the venue in time as heavy traffic caused issues on many routes in.

McIlroy looked in the mood to entertain the bumper galleries when he birdied the first and set up another chance from six feet following a huge drive down the second, although missing the putt appeared to take a toll on his confidence as he then bogeyed three in a row from the fifth.

A birdie at eight was offset by another mistake at the 11th as he slipped back to two over, but he dug deep down the stretch and birdied 14 before closing with a nice three at the last to get back to level par for the tournament.