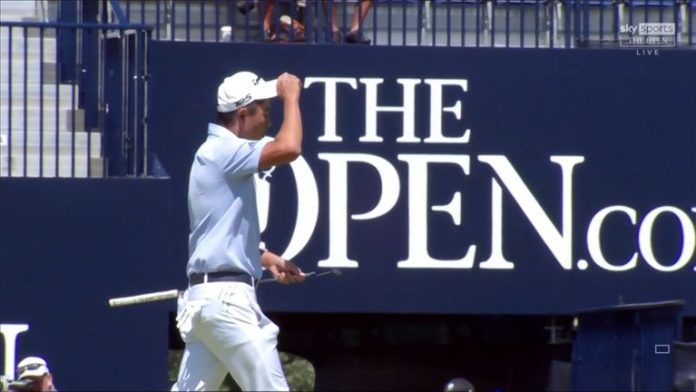 Louis Oosthuizen became the first player in Open history to break 130 for 36 holes as a 65 lifted him two shots clear of debutant Collin Morikawa on a second day of low scoring at Royal St George’s.

Louis Oosthuizen met the challenge of debutant Collin Morikawa with a record-breaking performance earning the South African a two-shot lead at the halfway stage of The 149th Open.

Morikawa would have harboured high hopes of heading into the weekend at Royal St George’s on top of the leaderboard after defying his lack of Open experience to fire a seven-birdie 64 to set the early clubhouse target at nine under par.

Last year’s PGA champion was three shots clear of the field when he signed his card, but Oosthuizen prospered in the afternoon session under clear blue skies and with precious little wind to contend with, adding a 65 to his opening 64 to become the first player in Open history to shoot 129 over the first two rounds.

Jordan Spieth’s 67 left him three adrift of the leader after 36 holes, while world No 1 Dustin Johnson added to the glut of sub-70 scores among the later starters, a birdie at the last capping a 65 that got him to seven under.

Pre-tournament favourite Jon Rahm powered into contention with a 64 and four-time major winner Brooks Koepka is also within touching distance of the leader, but Rory McIlroy and Bryson DeChambeau are 11 and 12 shots behind respectively as both had to scramble hard just to make the cut.

Oosthuizen led by one shot overnight but found himself three behind as he headed to the first tee, and he made instant inroads into Morikawa’s lead when he birdied the first before following a steady run of pars with a good four at the long seventh.

A birdie at the 12th not only drew him level with the young American, but it also triggered an impressive three-hole surge as he picked up another shot at 13 before holing from outside 20 feet for eagle at the next, completing his transition from three behind to three ahead with four holes to play.

Nick Dougherty and Andrew Coltart review Collin Morikawa’s second round at The 149th Open, where he threatened several records on his way to a six-under 64

At six under for the day, Oosthuizen needed one more birdie to match the course record of 63, but finding the deep bunker at the 16th led to his first dropped shot of the Championship, and he did well to avoid another at 17 before a rock-solid par at the last ensured his place in history as the first player to break 130 halfway through an Open.

“To have any record at the Open, or part of any record at the Open is always very special,” said Oosthuizen, six times a runner-up in majors, including two this year. “I think I’ve played really good the last two days. I probably played a bit better yesterday in the conditions we were playing in.

“Today we got really lucky over the last nine holes. It was as good a weather as you can get playing this golf course. All of us took advantage of that. I think in our three-ball we had a 64 and two 65s, which you don’t really see around a links golf course.”

Oosthuizen, whose score of 129 was just one short of Koepka’s all-time major record, is determined to stay grounded and avoid thoughts of running away with the title as he did at St Andrews in 2010, where he cruised to a seven-shot triumph.

“The game is good, but I know it’s a really good leaderboard,” he added. “You try not to think of it until you’ve done it. I remember looking back at 2010, and I know I had a big lead, but the first time I really thought about winning was after my tee shot on 17.

“There were a lot of things that could go wrong at St Andrews coming in, and a lot of things can happen around here. I don’t think you want to think too much of it on a links course until you get to that 18th green, and hopefully you have a lead.”

Jordan Spieth was left disappointed by missed opportunities during a second-round 67 at The Open, dropping the three-time major champion three off the lead

Morikawa’s first tournament on European soil at the Scottish Open last week provided him with critical feedback on how to manage his way around a links course, and a change of equipment set-up reaped huge rewards as he raced to 10 under with his seventh birdie of the round at the 14th.

But he was one of several players who fell just short of matching the course record after he missed from six feet to drop a shot at the 15th and parred in to settle for a 64 which had him three ahead of Daniel van Tonder, Emiliano Grillo and Marcel Siem as the afternoon wave headed out.

Johnson atoned for an early mistake with three birdies in four holes on the outward half, and he picked up three in a row from the 12th before hitting back from another bogey at 15 with a three at the last to return to seven under shortly after Oosthuizen’s compatriot Dylan Frittelli had signed for a 67 to end the day four behind.

Scottie Scheffler is also seven under after the WGC Match Play runner-up saved par from 12 feet at the last to cap a 66, while 2016 Ryder Cup star Andy Sullivan handed in a second straight 67 to install himself as leading Englishman ahead of Paul Casey.

Koepka birdied the final three holes to card a 66 and jump to five under, with Rahm responding to his disappointing first-day 71 with six birdies in a bogey-free 64, and he will be confident of making a significant dent in Oosthuizen’s advantage on Saturday having pipped the South African to the US Open title last month.

Rory McIlroy reflects on posting a final-hole birdie and a level-par 70 for the second day in succession, plus gives his verdict on playing in front of big crowds again

Shot of the day undoubtedly belonged to Jonathan Thomson, who was flirting with the cut until he made a spectacular hole-in-one at the 16th, and a birdie at 17 lifted the 6ft, 9in giant to two under alongside fellow Englishmen Matt Wallace, Tommy Fleetwood, Ian Poulter, Lee Westwood and Jack Senior.

But McIlroy’s chances of ending his major drought look slim after he was forced to call on his mental fortitude to recover from a bogey-bogey start, needing a second birdie of the week at the last to shoot 70 and stay at level par and one ahead of DeChambeau, whose off-course distractions are generating more headlines than his golf on the Kent coast.