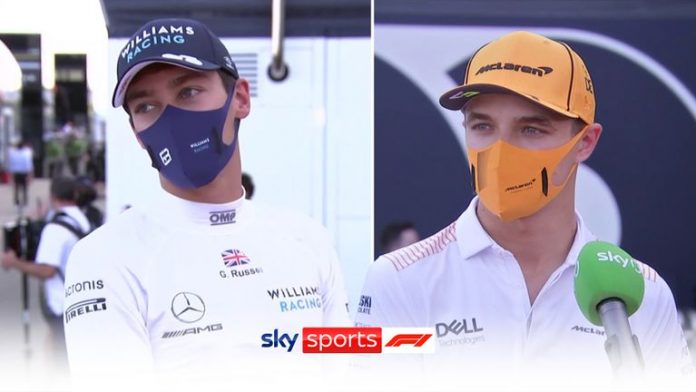 George Russell qualified eighth in a Williams while Lando Norris, after an incredibly difficult week, managed sixth in the McLaren; pair pay tribute to British GP fans and look ahead to maiden F1 Sprint on Saturday

George Russell and Lando Norris look back at qualifying and preview what to expect from tomorrow’s Sprint as both British drivers were delighted to hear the roar of the British crowd.

George Russell and Lando Norris have reflected on a “special” British GP qualifying after ensuring it was a superb Friday for all the home drivers at Silverstone with notable top-10 finishes.

Lewis Hamilton may have topped the session – which sets the grid for Saturday’s debut F1 Sprint – but Russell and Norris certainly stood out in front of the loud and passionate British fans, particularly in Russell’s case as the Williams driver secured his best-ever qualifying result.

Qualifying eighth in a Williams car in which his team-mate only managed 18th in, Russell sparked some of the wildest cheers in the capacity crowd with his efforts.

“To have my best qualifying result ever at Silverstone in front of the home crowd is such a special feeling,” Russell, alongside Norris, told Sky Sports F1. “Every lap I could see them jumping up, cheering, and I’m sure that’s the same for Lando as well.

“We’ve not experienced that because we’ve had a year and a half without any fans at all. To come back with full capacity on a Friday, is such a good feeling.

“For sure it gives you lap time, it gets you more motivated, more excited, you’ve got that extra spring in your step. It definitely helps and you feel a sense of responsibility.”

Russell makes it into Q3 for the second qualifying session in a row.

It was Russell’s second time to make it into Q3, and in consecutive races after doing the same in Austria. He then outqualified Carlos Sainz and Sebastian Vettel in the final shootout.

“One and a half tenths away from P4, which is absolutely mental!” Russell, the Mercedes junior, added.

He then said he would not be holding back in the F1 Sprint, the short 17-lap race which sets the grid for Sunday’s British GP.

“We only get in this position by throwing absolutely everything at it,” he stated. “So if I see an opportunity, I’m going for it.”

Norris’ sixth place in qualifying was less of a surprise – with the in-form Briton having secured two podiums this season – but still incredibly impressive after such a tough week.

Norris, 21, admitted he was “sore” and not at his best, physically or mentally, coming into the session after he was mugged at Wembley following the Euro 2020 final last weekend.

“I would say it’s the best we could have done,” Norris said about the session, having managed to outqualify experienced team-mate Daniel Ricciardo again. “You look at the timing sheet and Charles is seven hundredths ahead of us, so you would gave hoped for that little bit more but I didn’t even improve on my final attempt.

“It’s a tricky one but I’ve got an opportunity tomorrow to go a couple of positions forwards, so that’s the aim for us.”

McLaren’s Norris says he’s been struggling to sleep after being mugged at Wembley following the Euro 2020 final.

“The biggest thing on the out laps and in laps, you see them standing up and cheering, which is a cool feeling,” he added. “It gets you pumped, it gets you motivated to nail your next lap. It is a cool feeling. I think the bigger impact is going to be tomorrow, coming into the track and seeing them all, it’s just exciting and it puts a smile on your face.”

He also hinted at a rather more careful strategy compared to Russell for the Sprint.

“The main points for us – because we’re very unlikely to be on the podium – is Sunday,” he said. “We still have to put all our effort in that and not go for too many risks to try and go for that one extra position tomorrow.