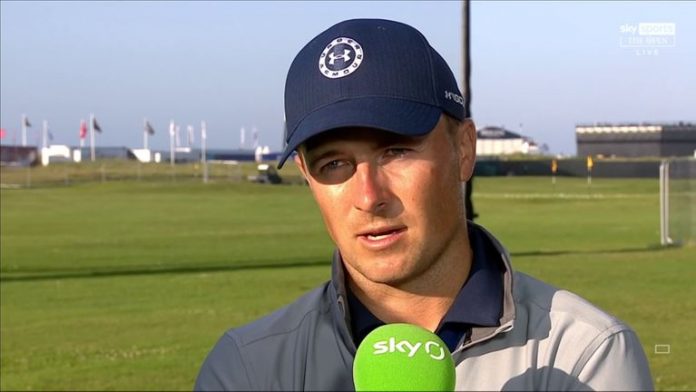 Louis Oosthuizen holds a two-shot lead over Collin Morikawa at the halfway stage of The Open, with Jordan Spieth three off the pace after a disappointing finish to his second round at Royal St George’s.

Jordan Spieth was left disappointed by missed opportunities during a second-round 67 at The Open, dropping the three-time major champion three off the lead.

Jordan Spieth was left frustrated having not taken advantage of the conditions and built on a fast start to his second round at The Open.

The 2017 Champion was a shot off the lead after the opening day and impressed early in his second round at Royal St George’s, birdieing his opening two holes on a low-scoring Friday.

Spieth was four under for his round with six holes to play but struggled over the closing stretch, bogeying the par-four 15th and closing his round with three pars to post a three-under 67, leaving him heading into the weekend three strokes behind halfway leader Collin Morikawa.

“I think that today was the day that could’ve really been the special one here,” Spieth told Sky Sports. “I felt like I had a really low one in me, but I just didn’t quite do it.

“I had a few putts there in the middle of the front nine and then obviously closed one over on the last six. I’m in a good position, but there’s kind of a bad taste in my mouth with what could’ve been.”

The three-time major champion was four under for his round with six holes to play but struggled over the closing stretch, bogeying the par-four 15th before closing his round with three pars.

“I think I need to bring more food on the golf course tomorrow,” Spieth later added. “I got really just in a weird head space, like fatigued there on the 13th green as we were waiting and hitting putts.

The 149th Open: Day two as it happened

Relive the best of the action from the second round of The Open at Royal St George’s.

“I just didn’t stay focused like I was early in the round. Wasn’t very sharp. It’s an easy solution for tomorrow. The finish on 18 secured a second to last group on Saturday, which is a good position to be in, but today was an afternoon where I eyeing a number lower than what I finished at.”

World No 1 Dustin Johnson battled his way back into the tournament with a five-under 65, with the two-time major winner birdieing his final hole to jump into the group on seven under and tied-fourth.

Dustin Johnson was pleased with his performance over the first two days at The Open, with a second-round 65 lifting the world No 1 within four of the halfway lead at Royal St George’s.

“I think it’s really solid and today I obviously made a bunch of birdies and feeling like I was really swinging it well,” Johnson told Sky Sports. “A couple of mistakes, but other than that, I was just putting myself in good positions, drove it pretty well and hit a lot of good iron shots.””

Brooks Koepka heads into the weekend six off the pace, having recovered from dropping three shots in two holes early in his round to close a second-round 66 with three consecutive birdies.

“I just felt like I had to get back in to the golf tournament. I was so mad at myself at making a mental mistake, talking Ricky [Elliott, caddie] into three-wood. When you make a mental mistake and a poor swing, it’s going to be a disaster.

“I’m okay with making bad swings, but like I said, if you’re going to make a mental mistake, that’s inexcusable. So, I’ve got to play a clean card pretty much this weekend if I want a chance.”

Watch The 149th Open throughout the weekend live on Sky Sports. Live coverage continues on Saturday from 9am on Sky Sports The Open.