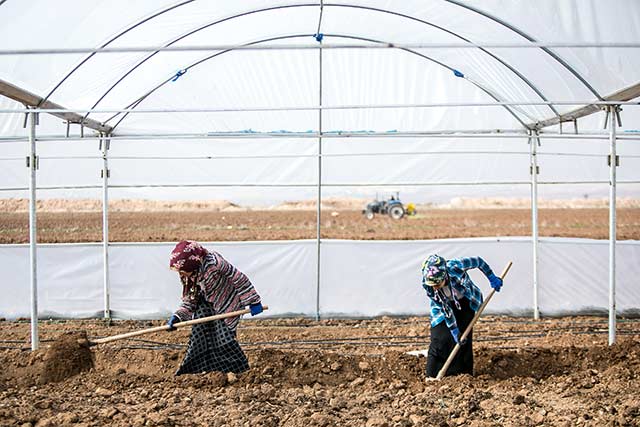 Extreme weather conditions during Syria‘s seventh year of conflict has caused domestic cereal production to decline sharply, two UN agencies announced today. Wheat production this year fell to a 29-year low of 1.2 million tons, about two-thirds of 2017 levels. This was due to an extended period of dry weather early in the cropping season followed by heavy out-of-season rains, according to the latest Crop and Food Security Assessment Mission (CFSAM), conducted jointly by the UN Food and Agriculture Organization (FAO) and the World Food Programme (WFP).

The conflict in Syria has also damaged vast farming areas, displaced thousands of Syrian farmers and triggered a sharp increase in the cost of agricultural inputs. While more displaced people are returning to their homes and the number of people in hard-to-reach locations has dropped by two-thirds, the report estimates that 5.5 million Syrians remain food insecure and require some form of food assistance, a decline of around 20 percent from the year before. In addition, some 500,000 to 800,000 people in the northern governorate of Idleb may be food-insecure.

“We are encouraged by some improvements in food security levels this year, says Corinne Fleischer, WFP Country Director and Representative in Syria. “However, the conflict has drastically eroded livelihoods and triggered widespread unemployment. Continued humanitarian assistance at scale is essential to prevent the most vulnerable families from falling back and deeper into poverty and hunger. Meanwhile, WFP is working hand-in-hand with FAO to deliver programmes that create employment and livelihood opportunities to empower Syrians as they begin to recover and rebuild their lives and country.”

“Agricultural recovery is essential for Syria now and in the future,” says Mike Robson, FAO’s Representative in Syria. “FAO has focused on keeping production from collapsing during the conflict and is engaged in a host of activities in the country to support irrigation, livestock vaccination, household nutrition and entrepreneurship among the displaced.”

While improved security, stability and the re-opening of supply routes have led food prices to decline by around 40 percent compared to last year, prices remain almost seven times higher than before the crisis. With unemployment rates reaching up to 60 percent, families grapple with reduced purchasing power, restricting their ability to cover their basic food needs.

Adverse weather conditions led to only 38 percent of the wheat crop in rain-fed areas being harvested this year. Farmers have reported it as the worst agricultural season in living memory in Al-Hasakeh, the northeastern region that typically provides almost half of the country’s wheat.

Barley, a more drought-tolerant crop, fared better but production still fell to its lowest level since 2008. According to the report – which is based on interviews and surveys as well as satellite and government data – farmers complained of sporadic water availability, the high cost of fuel to run irrigation pumps and a shortage of tillage equipment.

As the Government regains control of territory and pumping stations, work to restore water treatment plants and irrigation canals has begun. However, the work may take years to complete. The conflict in Syria has taken a heavy toll on the agricultural sector, as evidenced in limited access to seeds, something which will pose a “major problem” in the year ahead, the FAO-WFP report says. For planting, many farmers rely on grain saved from their own limited harvests. Given this year’s poor cereal harvest, seed quality for re-planting later this month will likely be low, with an expected knock-on effect next year.

Other key inputs and equipment – fertilizers, subsidized fuel, pesticides, functioning tractors, grain silos, milling plants and warehouses – are also in limited supply. Livestock numbers, albeit down by roughly half from their 2011 levels, have stabilised compared to last year but poor crop harvests are likely to lead to culls as feed prices rise.

The assessment highlights that food security levels have slightly improved over the past year, due to enhanced security and better market access. However, there remain areas of serious concern where continued conflict is driving new displacements. Food assistance has been a lifeline for conflict-affected households across the country and will continue to be required as displaced people gradually return to their homes, the FAO-WFP report says.

Nearly one out of four households have poor food consumption, including limited access to key micronutrients; most affected are displaced families, returnees and female-headed households. Declining levels of external assistance could pose a great threat to recent food security gains unless there is substantial economic recovery and growth, according to the report.

WFP is currently reaching around 3 million people with food assistance and plans to make a gradual shift from general food assistance, in the form of food rations, to more market-based programmes where markets are functional and supply routes are strong. This will have the added benefit of stimulating the local market. Over the coming two years, it is essential to explore options for fostering the recovery and development of national safety nets by focusing on the most vulnerable communities, investing in school meals activities and ramping up resilience-based livelihood activities.

FAO’s programmes helped farmers grow enough wheat to feed an additional 1.7 million people in 2017, keep livestock diseases at bay, and are contributing to rebuilding agricultural infrastructure and income-generating opportunities as well as supporting micro-gardens and other small-scale production initiatives among Syrian refugees in neighboring countries. The report says that the next two years are crucial for rebuilding lives and livelihoods across the country.