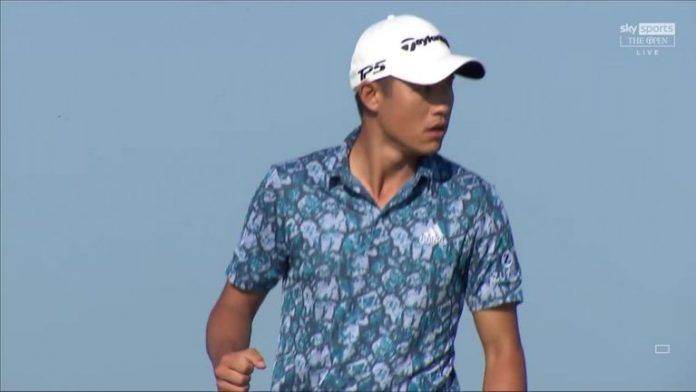 “The Open Championship is going to be part of my life the rest of my life no matter what happens. To be a part of that history, it’s awesome. To hear ‘Champion Golfer of the Year’, chills!”

Rob Lee, Andrew Coltart and Dame Laura Davies look back at the key moments from Collin Morikawa’s major-winning round at The 149th Open

Collin Morikawa was struggling to comprehend the magnitude of his “special” Open triumph after creating golfing history with his two-shot victory at Royal St George’s.

Morikawa defied his lack of experience on links courses to hold off Jordan Spieth and celebrate his debut in the Championship with victory, becoming the first golfer to win two different majors at the first attempt following his PGA win last year.

With playing-partner and overnight leader Louis Oosthuizen struggling to find the form that had helped him set a new Open record with his halfway score of 129, Morikawa produced a calm and collected performance on the final day and kept a bogey off his card in a closing 66.

Three consecutive birdies capped an outward 32 and gave him a brief four-shot lead which was whittled down to one when Spieth birdied the 10th, 13th and 14th, but Morikawa holed a decisive 20-foot putt for birdie at 14 and parred safely home to win on 15 under par.

“We only get four majors a year, and every single one of them is very special,” said Morikawa, who is the first player to win on his Open debut since Ben Curtis at the same venue in 2003. “To finally get to play an Open Championship for the first time and win it, it’s going to be that much more special.

“To be a part of that history, it’s awesome. To hear ‘Champion Golfer of the Year’, chills!”

Morikawa also revealed how Brooks Koepka helped inspire him to develop his winning mentality in just his third PGA Tour start as a professional in his rookie season in 2019.

“You try not to listen to everything when you have a rookie or it’s your rookie year or it’s your debut,” he added. “And if you do, you do. Sometimes it gets to people.

“But I heard Brooks say at the Travelers Championship that he was there to win. When he first turned pro he was there to make cuts. Then he went to top 30s and top 20s and top 10s. From that day I just switched to, ‘let’s go out and win’.

Final round as it happened

“So by the time I was at the PGA last year I had already played in these events with all these guys, all the big name guys, and felt like a normal event.

“So you have to be precise about everything, and that’s how I looked at it as a challenge, and I looked forward to it.”

Morikawa now has two major victories to his name in just eight starts, but he remains determined to push for more rather than spend too much time reflecting on his history-making achievements.

“When you make history, it’s hard to grasp and it’s hard to really take it in,” he added. “At 24 years old, it’s so hard to look back at the two short years that I have been a pro and see what I’ve done because I want more. I enjoy these moments and I love it, and I want to teach myself to embrace it a little more.

“But I just want more. When you’re in these moments and you truly love what you do, which I love playing golf and competing against these guys, these are the best moments ever because the nerves push you to just be a better person.”

Watch the moment Collin Morikawa was able to complete his victory at The Open, tapping in on the final green to secure his second major title

Morikawa’s unflappable composure was a feature of his final-round performance, although he admitted he did well to hide his nerves when Spieth and Jon Rahm were making their moves over the back nine.

“I’m glad I looked calm because the nerves are definitely up there,” he said. “But you channel these nerves into excitement and energy, and that puts you away from like a fear factor into this is something I want. So that’s how I look at it, especially as those last nine holes were coming in.

“Jordan was making birdies; I think Rahm was pushing; Louis had a birdie on 11, an amazing birdie. You can’t worry about the score. I had to worry about every shot. Could I execute every shot to the best of my ability? Some we did, some we didn’t, and then you move on. We can’t control what’s going to happen, what has happened.”