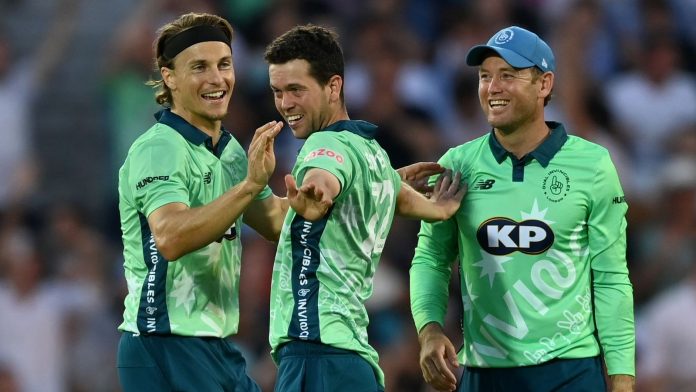 It was déjà vu from the opening night with Oval Invincibles beating Manchester Originals again! A day after the London side’s women’s team had triumphed against their rivals from up north, the men did the same.

Originals would have fancied their chances after limiting Invincibles to 145 from their 100 balls – captain Sam Billings’ 49 off 30 balls the pick of the batsmen in that innings – but the home side’s bowlers had other ideas.

That could be that! ⌚

The Curran brothers, Sam and Tom, were among those to make it hard for the visitors to score, with Originals ending on 136 from their 100 balls at a sold-out and sun-baked Kia Oval.

There was still hope for Originals with 19 needed from five balls and Carlos ‘Remember the Name’ Brathwaite on strike – but he was then caught by Jason Roy off Sam Curran for 37 in a massive blow for Originals.

It has to be Jos Buttler falling for eight.

The Originals captain – one of the best white-ball batsmen England have ever had – had reverse-swept Sunil Narine’s previous ball brilliantly for four but was then deceived by a delivery that spun sharply and skewed to cover.

With the main man gone, Originals were always at a disadvantage and despite Brathwaite keeping them in the game, they ultimately fell short.

Reverse sweep 🤯 then OUT for captain Jos Buttler ❗

Plenty of candidates among the bowlers.

For Originals, Fred Klaassen claimed three wickets and Steven Finn two in three balls, while Tom Hartley took two in the powerplay and bowled beautifully while conceding just 24 runs from his 20 balls.

For Invincibles, the Curran brothers snared three wickets between them and spinners Narine and Nathan Sowter also starred, but the accolade went to a batter in Billings.

Billings’ knock was one of the key reasons Invincibles were able to get up to 145 after a tricky start, while he then captained brilliantly in the run chase.

Kudos to Tom Curran for his batting, though. He struck three fours and a six in his late 29 from 18 balls – but it was his Natmeg for two which really caught the eye, a Natmeg Nat Sciver herself gave 10 out of 10!

Left-armer bowler Klaassen did not have a Hundred team until he was selected by Originals as a wildcard pick a few weeks ago – but he starred at The Kia Oval with three wickets from his 23 balls.

Billings falls just short of a 5⃣0⃣ – out for 49 off 30 balls. Invincibles 127 off 87 balls in #TheHundred #OvalInvincibles 🟢 | #ManchesterOriginals ⚫

The 28-year-old had taken 14 wickets for Kent in the Vitality Blast and continued his fine form by removing Billings, Narine and Sowter – Billings out after being deceived by an excellent slower ball.

Klaassen’s wicket of West Indian Narine was a little bit fortunate, though, as had Invincibles reviewed the lbw decision, Narine would have survived with the ball set to miss the stumps.

THE SIX AND OUT AWARD

There was debate over who would open for Oval Invincibles alongside Roy – and it was his England team-mate Sam Curran who got the nod.

Curran defended the first ball he faced, smashed the second over long-on for six, and was then bowled from his third as Originals spinner Hartley earned revenge for being hit into the stands.

That wicket impressed Originals captain Buttler, who went on to give his spinner another five balls to make it 10 in a row, a new option for captains in this new competition.

The Manchester Originals man’s brilliant low grab running in from deep midwicket – and looking into the sun – was brilliant in its own right but it was all the more important for his side as it got out Invincibles dangerman Roy after the batter had hit four fours in his innings.

Lammonby pulls off a blinder to send Roy back! Invincibles 32 off 23 balls #TheHundred #OvalInvincibles 🟢 | #ManchesterOriginals ⚫

Roy had hammered 64 from just 36 balls playing for England against Pakistan earlier in the week but Lammonby’s excellent fielding cut him off on Thursday night before he could do some real damage.

It’s the first double header of the tournament at Edgbaston on Friday, with the Birmingham Phoenix and London Spirit’s women’s teams facing each other from 3pm and the men’s sides then squaring off from 6.30pm.

Watch live on Sky Sports The Hundred from 2.30pm, with the women’s game also being shown on the Sky Sports Cricket YouTube channel.