Home Culture Val Kilmer leads a tantalizing tour of his life and career in... 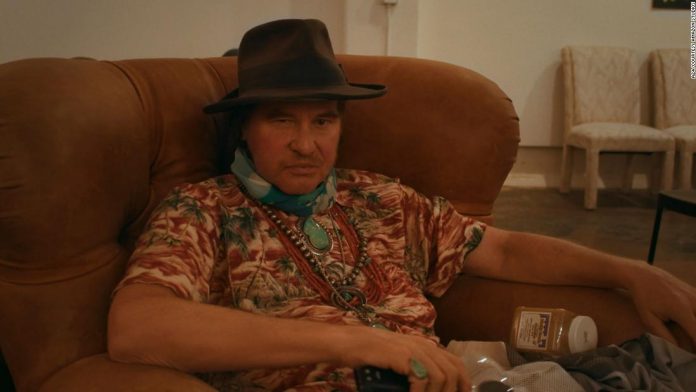 “Val” bears a more-than-passing resemblance in format to “Kid 90,” “Punky Brewster” star Soleil Moon Frye’s similar walk down memory lane, with all the name-dropping and cameos that entailed. Here, the audience is treated to behind-the-scenes footage from “Tombstone,” the “Top Gun” cast partying after hours (“We were all at the start of our careers,” Kilmer recalls), and a very young Kevin Bacon and Sean Penn mooning Kilmer’s camera when the three appeared in a play together.
Adding considerable poignance to “Val” is Kilmer’s current status, recovering from throat-cancer surgery that makes it difficult for him to speak. His son, Jack, reads the actor’s written narration, sounding so uncannily like him that at first blush you think they must have found some way to digitize his voice from the ’80s.
The roles that Kilmer played possess an iconic quality while underscoring the way his career frequently zigged at the point where it could have zagged, to his detriment if not in terms of the quality of the work but how Hollywood and the public perceived him.
Kilmer enthusiastically agreed to star as Batman, for example, but quickly soured on that experience, passing on another sequel in favor of the forgettable reboot “The Saint.” Similarly, he took a role in “The Island of Dr. Moreau” in order to play opposite Marlon Brando, only to clash with director John Frankenheimer (exchanges caught on camera) and be disappointed when a detached Brando periodically refused to come to the set, letting a stand-in take his place.
Kilmer speaks frequently about his desire to work with certain directors, showing audition videos that he shot for parts he failed to land in “Goodfellas” and “Full Metal Jacket,”seeking to impress directors Martin Scorsese and Stanley Kubrick, respectively. The actor similarly documents his laborious auditioning and preparation process for portraying Jim Morrison in “The Doors.”
Even in his current condition, and despite tragedies that included the death of his younger brother at age 15, Kilmer speaks of leading a “magical life,” finding the silver lining as he endures fans asking for the same “Top Gun”-inspired “You can be my wingman” autograph over and over at Comic-Con.
“I feel grateful rather than humiliated” by those interactions, he says, though his expressions occasionally betray a tinge of the latter.
Having also authored the 2020 memoir “I’m Your Huckleberry,” Kilmer’s autobiographical material in “Val” includes relationships with his kids, his marriage to and divorce from “Willow” co-star Joanne Whalley and glimpses of his childhood, all captured extensively on video. (The project is directed by Leo Scott and Ting Poo, with Kilmer credited both as the cinematographer and a producer.)
Perhaps foremost, “Val” nicely illustrates the ways in which its subject’s aspirations as an artist periodically collided with the demands of commercial success, objectives that are frequently at odds.
In that respect, “Val” reflects Kilmer’s particular journey but almost feels like required viewing for any young actor eager to follow a similar path. Because while speaking has become a challenge for Kilmer, the lessons from his life in Hollywood come through loud and clear.
“Val” premieres in theaters on July 23 and on Amazon on Aug. 6. It’s rated R for language.