Home Culture Musicians are back on stage 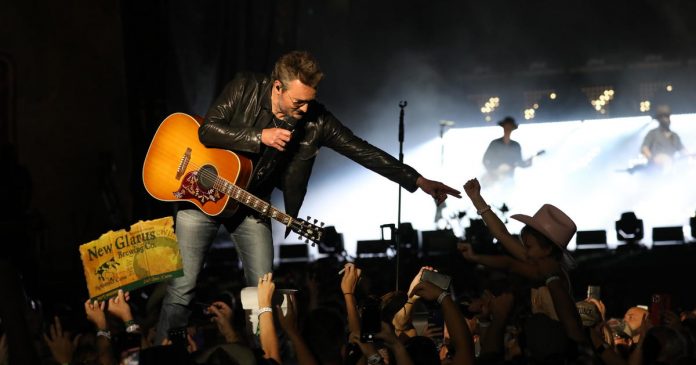 After COVID shuttered live music events around the world in 2020, musical artists are now returning to festival and concert stages – and so are the fans.

In their first live show since the pandemic, REO Speedwagon performed at RiverEdge Park in Aurora, Ill, July 1, 2021.  It was the first concert at RiverEdge since 2019, as last year’s performances were cancelled.

The band performed such hits as “Music Man,” “Keep Pushin’,” “Ridin’ the Storm Out,” “Time for Me to Fly,” “Take It on the Run,” and “Keep on Lovin’ You.” Fitting for a year of lockdown and cancelled concerts, they finished with a performance of “Roll With the Changes.”

Key to the City

Their setlist included “Never Been Any Reason” (which was featured on the band’s debut album back in 1975)  and “Elijah.”

The Country Thunder festival returned to the Shadow Hill Ranch in Twin Lakes, Wis., July 15-18, 2021. Although COVID vaccines weren’t a prerequisite for admission, attendees with vaccination cards were eligible to win a signed guitar or a seat on stage during the headline acts.

Rules about dancing on buses are apparently being flouted.

Festival food is served up at Country Thunder.

The crowd at Country Thunder.

Never mind the acts on stage – fans sing to each other at Country Thunder.

Eric Church’s setlist included his hits “Drink in My Hand,” “Talladega,” “Record Year,” “Like a Wrecking Ball,” “Hell of a View,” and “Stick That in Your Country Song.”

A cool dude gets down.

The closing act at Country Thunder was Blake Shelton, who performed at Twin Lakes, Wis., on Sunday, July 18, 2021.

The supergroup Sammy Hagar and the Circle performed at RiverEdge Park in Aurora, Ill., July 18, 2021.

Hagar (who replaced David Lee Roth as the lead singer of Van Halen) performed a number of Van Halen hits, including “Good Enough,” “Finish What Ya Started,” “Right Now,” and “Why Can’t This Be Love,” as well as his own “Heavy Metal” and “Your Love Is Driving Me Crazy.”

Guitarist Vic Johnson with Sammy Hagar. Johnson has played with The BusBoys and with Hagar’s earlier group, Sammy Hagar & The Waboritas.