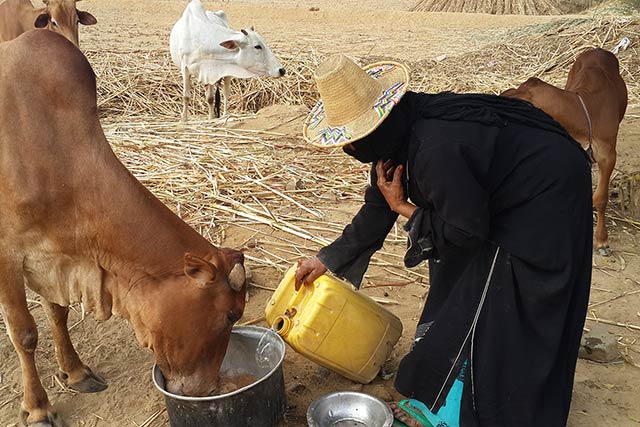 For 25-year-old Fathia Moafaa, every day is a struggle to make ends meet. Her work starts at 6pm, just after evening prayers and, apart from a short break at 10pm, she continues through the night until dawn, turning milk from the family’s three cows into yoghurt, butter, ghee and Laban to sell at her local market in Yemen’s Al Hudaydah governorate. The profit she generates supports herself, her husband and her mother in law. “This is our livelihood,” she says. “This is how we exist.”

Fathia, like many others in the dairy business, works with traditional equipment and lacks access to basic resources such as electricity and refrigeration. She is constantly hassled by the local health authorities who say her produce does not meet proper food safety and hygiene standards. Yemen’s underdeveloped dairy sector has considerable potential – and there is significant and growing demand for dairy products that is not being met. Currently, Yemen’s milk production only meets one-third of domestic demand, resulting in a heavy reliance on imported powdered and long-life milk. Indeed, more than 95 percent of processed dairy items are imported, making them expensive.

Improvement in the small-scale dairy sector therefore has the potential to play a significant role in the food security of rural households, especially in nutrition for children, pregnant and lactating women, and the elderly. This is particularly important in a country where 17.1 million people are food insecure.

FAO is improving the dairy value chain as one of the key components of its Enhanced Rural Resilience in Yemen (ERRY) programme funded by the European Union. The programme is designed to enhance the self-reliance of rural people and communities, and assist them to better cope with crises, risks and shocks. FAO will provide more than 1 500 dairy producers in Al Hudaydah, Hajjah, Lahj and Abyan with new and modern dairy equipment as well as training in proper food hygiene and processing.

Dairy processing is one of the sectors in Yemen in which women work and 800 women will be among the beneficiaries. In February 2017, 600 beneficiaries (including 94 women) in Al Marawi’ah in Al Hudaydah governorate received new equipment, including stainless steel milks cans, food grade plastic filters and butter churns. The goal is to enable the women to produce better quality food and to higher standards, which will allow them to earn more income at the market. “The women’s response to this project has been very enthusiastic,” says Laila Bakri, FAO’s trainer in Al Hudaydah, adding that women have rushed to give feedback and suggest other ways they could be supported.

The distribution of equipment will be accompanied by training in proper food standards and hygiene, and in how to make a wider variety of products such as Baladi cheese. This popular white cheese is used in sauces that accompany many staple foods but, at the moment, it is all imported. For women like Fathia, the new equipment is making a world of difference and she is excited to learn how to make more products. “This is already saving us time and effort,” she says eagerly. “Especially the butter churns, which have increased production tenfold. Now we have more time to rest because we can produce much more in far less time.”