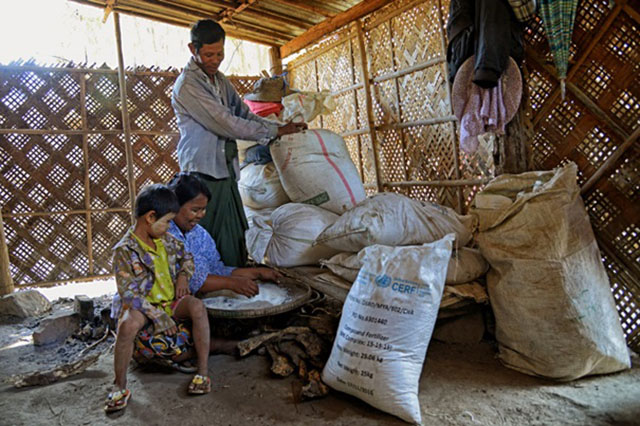 Six months after the destructive floods that destroyed planted rice paddy, villagers from Shwe Hlay in Magway Region in Myanmar’s Dry Zone are now able to harvest winter crops thanks to the emergency quality seeds distribution that took place in November 2016.

The Region was among the hardest hit areas in July–August 2016 by the major floods that caused widespread devastation and displacement and had a particularly heavy impact on the agriculture sector, as many farmlands had been inundated just before the harvest season. The disaster was particularly serious as the same areas had been previously affected by the severe and widespread flooding in 2015.

“The flood affected our three acres of paddy land and destroyed the majority of the planted crops” explained a 28-year-old Thein Gei, a beneficiary of the FAO emergency response project. Like other households in her village, Thein Gei’s family rely entirely on agriculture for their livelihood. Thus, the harvest damages and losses caused by the floods further aggravated their food insecurity and increased the incidence of negative coping strategies, including going into debt after taking loans to buy new seeds for replanting.

“I am very grateful for this support. Previously, I could not afford to buy seeds and fertilizer, but now I can plant winter crops. I am also very happy to have received vegetable seeds because I am now able to grow vegetables next to my home and sell my surplus on the local market to generate some income” said Thein Gei.

The CERF-funded project allowed for the immediate resumption of livelihood activities and food production. To further continue life-saving livelihood interventions in Myanmar, FAO is appealing for USD 5.1 million to assist an additional 87 000 food insecure people in 2017.