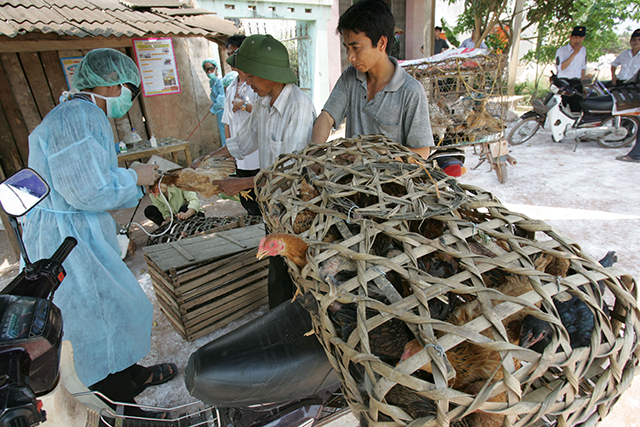 A resurgent outbreak of a new strain of avian influenza that can be lethal for humans underscores the need for robust and rapid detection and response systems at animal source. This would reduce the risk associated with virus spread and impacts on public health, according to Food and Agriculture Organization and the World Organisation for Animal Health.

Human cases of the H7N9 virus, first detected in China four years ago, have suddenly increased since December 2016. It is estimated, that as of early March 2017, there have been more reported human cases of influenza A (H7N9) than those caused by other types of avian influenza viruses (H5N1, H5N6, etc.) combined.

As during previous waves, most of the patients infected reported a history of visiting live bird markets or coming into contact with infected birds. Since 2013, China has invested heavily in surveillance of live bird markets and poultry farms. However the surveillance of this virus has proven particularly challenging as until recently it has shown no or few signs of disease in chickens.

“Considering the potential for mutation of avian influenza virus, constant surveillance by national Veterinary Services of the different strains circulating in animals in their country is essential to protect both animal and human health”, explains  Matthew Stone, Deputy Director General of the OIE.

“To protect human health and people’s livelihoods, it is essential to tackle the disease at its source in poultry: efforts need to target eliminating H7N9 from affected farms and markets,” said Vincent Martin, FAO’s Representative in China.

“Targeted surveillance to detect the disease and clean infected farms and live bird markets, intervening at critical points along the poultry value chain – from farm to table – is required. There should be incentives for everybody involved in poultry production and marketing to enforce disease control.”

Emergence of a high-pathogenicity strain

Until recently, H7N9 has demonstrated low pathogenicity, meaning it may cause mild or no illnesses in poultry. New evidence from China’s Guangdong Province now indicates that H7N9, while retaining its capacity to also cause severe disease in humans, has shifted to high pathogenicity in poultry, a genetic change that can lead to high mortality for birds within 48 hours of infection. That may potentially make it easier to see when chickens are infected, facilitate introduction of control measures also at the farm level, but also raises the risk of severe animal and economic losses for those engaged in poultry production and sales.

“China has been quick to notify international organizations about the virus’ recent change from low to high pathogenicity in poultry. Given the continuous risk of virus change, inherent to all influenza viruses, timely sharing of surveillance results and sequence information with the international community is crucial for pandemic preparedness,” said Stone.

The need for ongoing targeted and widespread monitoring and effective response to detections remains urgent to keep the virus from spreading beyond China’s Eastern and Southeastern regions, where it is now considered endemic. This strain of H7N9 virus has so far not been notified in poultry populations outside of China despite intensified surveillance in neighbouring countries and those at risk.

Neighbouring countries remain at high risk, and all those that have poultry trade connections – either formal or informal – to China. A further concern is the possibility that changes seen in the H7N9 virus may affect wild bird population, posing risks to their health or turn them  into migratory carriers of the virus, expandingthe risk of the virus spreading further as has been seen with other avian influenza strains in faraway Europe, Africa or the Americas.

In response to the latest surge of cases, China’s Ministry of Agriculture has ordered animal husbandry, veterinary and public health officers, as well as authorities in charge of industry and commerce, to take timely and closely coordinated actions so that H7N9 cases can be identified quickly and appropriate measures taken. Culling of affected flocks is required and increased hygiene at live-bird markets is being enforced. The Harbin Veterinary Research Institute, recognised by OIE and FAO as an international reference centre, which serves as the National Avian Influenza Research Laboratory and its countrywide laboratory network are closely monitoring for virus mutations and epidemic status.

While more than 1 200 human cases of H7N9 have been reported since 2013, there is no danger of catching the disease by eating chicken. Livelihoods reliant on poultry, however, are at serious risk due to the necessary prevention and control measures and losses are destined to increase, as chicken will be vulnerable to the emerging high-pathogenic strain.

China’s Ministry of Agriculture is calling once more for improved biosecurity in markets, forbidding birds from remaining overnight to avoid accumulation of virus, enforcing market rest days, closures and regular cleaning, which is essential in responding to the disease, especially in preventing human exposure.

With all the efforts taken by China and partners, there is a pressing need to understand why these measures have not worked as well as expected and to undertake more outreach efforts to work with the poultry industry to institute safer practices, farmer registries, hygienic market practices, targeted surveillance and timely reporting.

“Following a “One Health” approach, we need to understand the drivers of this disease and in devising appropriate control and preventive strategies and longer-term management programs”, said Dr Juan Lubroth, FAO Chief Veterinary Officer. “These must be tailored to meet the expectations of all stakeholders involved, such as farmers, traders, transporters, market operators, government and international agencies and the consumer.”

FAO and OIE emphasize the importance of making all information from ongoing and intensified surveillance activities in China available in a timely way. Such data are essential to the coordinated global effort to understand avian influenza in all its types, as well as to gauge H7N9‘s potential to spread along different poultry value chains or through wild bird movement. The two international organisations urge countries in the region to be vigilant for a potential incursion of the virus, in its low or highly pathogenic form, and are calling for urgent investment in surveillance and laboratory detection to safeguard trade, including across borders.