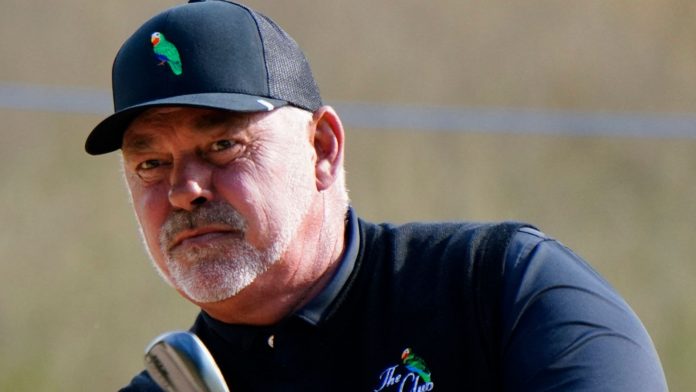 Darren Clarke produced a fast finish to his second round to take a one-shot lead into the weekend at The Senior Open presented by Rolex.

The Senior Open presented by Rolex

The 2011 Champion Golfer of the Year birdied four of his final six holes to card a three-under 67 at Sunningdale Golf Club and move to eight under, giving the Northern Irishman a narrow advantage over defending champion Bernhard Langer and American Jerry Kelly.

A joint-low round of the day 65 from Paul Broadhurst lifted the Englishman within two of the lead alongside Ernie Els, while Miguel Angel Jimenez and former Masters champion Ian Woosnam are among the group of players four off the pace in tied-sixth.

“It would be huge to win,” Clarke said. “But you know, we’re all long enough in the tooth to know this is only two rounds and a lot of golf to be played yet. I would love to have this trophy sitting beside the Claret Jug.

“Got to go work on some iron play, my iron play wasn’t there especially around the front nine today but other than that drove the ball well. Really in the mix come Sunday afternoon and would love to improve.”

Clarke opened with two birdies over this opening three holes but lost ground with three consecutive bogeys from the sixth, before seeing a birdie at the ninth cancelled out by a blemish at the 12th.

Back-to-back gains from the 13th were followed with birdies at the 16th and par-four last to move Clarke into the outright lead, with Langer one back after also posting a second-round 67.

“It’s fairly solid and I’m driving the ball fairly good, which keeps me in play to attack some holes,” Langer said. “That was key yesterday. I got off to a great start today with an eagle on one and another birdie but just couldn’t continue on the back side.”

Colin Montgomerie fell eight shots behind after a two-over 72 and Sky Sports’ Rich Beem is a further shot back following a second-round 70, while former Ryder Cup captain Paul McGinley is in the group on two over that includes Alex Cejka and Jim Furyk – who between them have won three of the four senior major winners this season.

Watch The Senior Open presented by Rolex throughout the weekend on Sky Sports. Live coverage continues on Saturday from 2pm via the red button, ahead of coverage on Sky Sports Golf from 4pm.