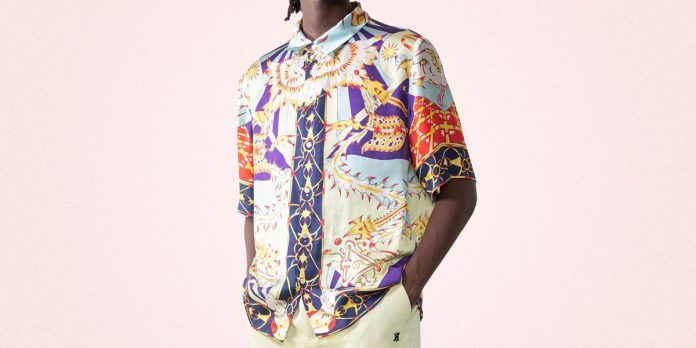 It’s Friday and, great news, we can go outside. The world has largely opened up again; you can stand at a bar, walk into a restaurant without a reservation, and hop on a flight without waiting two weeks. And here to help you look your best in this new-slash-old world are a number of nifty releases. We have some cool camp shirts perfect for IRL parties from Daily Paper and Buck Mason. Is going to the beach on the horizon? The Hershel and Birdwell collab and Yeah, I Work Out’s latest collection have got you more than covered on that front. Also, if you’re a patient fella, we linked to a covetable waiting lists, one from Yeezy and Gap. Now get to shopping and living it up, because TGIF.

Birdwell has found another surf buddy. Following a collab with Todd Sndyer last month, the OG maker of board shorts has partnered with a Canadian luggage and accessories brand Hershel on a line that combines what both do best. This, of course, includes shorts, which are inspired by the first ones the company made, and a line of bags made of Birdwell’s proprietary SurfNyl fabric.

Wearing pearls is now a thing, pals. And here to offer some spiffy gems is Nok Salirathavibhaga, the Thai jewelry designer behind Pattaraphan. Already a favorite of gals like Hailey Bieber and the Hadid sisters, the brand has released a limited-edition unisex collection of pearl hoops that look just as good on dudes.

Is an island rendezvous on the horizon? Do you have somewhere shnazzy to go in the next few weeks? Most important, are you trying to figure out what to wear? Look no further than Daily Paper. The Amsterdam-based brand just dropped its fall 2021 collection and the pieces in the lineup, particularly this flag shirt, will help you in all scenarios.

The sneaker industry is a marathon and Malone Souliers has just joined the race. The luxury footwear label has debuted two low-top styles inspired by ’60s sportswear, joining its stable of boots and loafers.

Drawing from founder Jack Carlson’s own travels and stint as a member of the United States National Rowing team, Rowing Blazers has launched its ’90s-inspired International Collection. The line includes tees, pullovers, and ruby shirts, which features flags from 10 countries. And now that the Olympics has started, cop the one with your home nation.

Buck Mason, the maker of some of our favorite tees, has launched a capsule collection, which includes a boxy camp shirt and matching shorts, which is made of four-way stretch, quick-drying cotton blend. Congratulations, you have your summer fit!

The long-awaited arrival of the Yeezy Gap collection is here—well, sort of. After dropping a light blue version of the Round Jacket, this morning the brand debuted a waiting list along with a new, black colorway. And judging by its style alone, we can say that the partnership is worth the hype.

LL Cool J is a godfather of hip-hop, so when he debuted Rock the Bells, a label that payed homage to classic hip-hop last year, best believe that it was doin’ it well. For this year’s drop, the collection includes tees and sweatsuits that are great for lounging at home or, you know, actually going to a hip-hop concert again.

Yeah, I Work Out yeahiworkout.com

Latin Grammy-winning producer Tainy and Reggaeton artist Yandel have joined forces with heritage brand Starter for a limited-edition collaboration. The line of tees and hoodies celebrate the the launch the release of the duo’s latest album, Dynasty.

Franco Harris, a NFL Hall of Famer and former fullback for the Pittsburgh Steelers, has launched  Game Day Socks, a line that will, well, knock the socks off fans of the game. The features some of football’s greats, including Alan Faneca, Peyton Manning, Steve Hutchinson, and Drew Pearson.

You don’t have to be a weed enthusiast to appreciate the sleekness of cannabis brand Raw Garden’s collab with L.A. designer Catherine Fulmer.