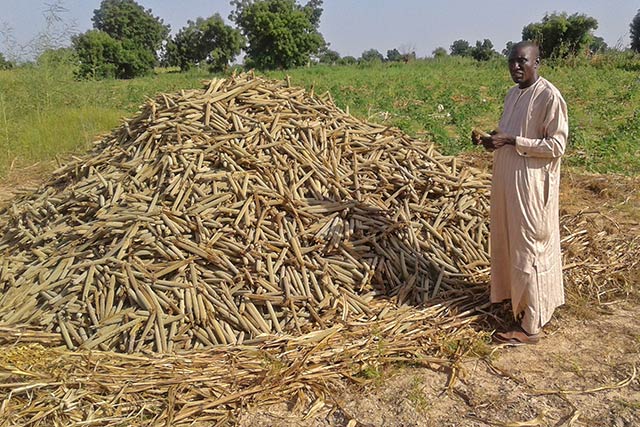 As conflict and instability continue, the food security situation in Nigeria and the Lake Chad Basin is drastically deteriorating, FAO warned today, as it called for swift and decisive action from the international community to protect the livelihoods of millions of families dependent on farming, livestock and fishing for their food and livelihoods.

With the next planting season starting in May, and with scarcity of animal fodder and water points during the lean season, it is crucial that crop seeds, tools and livestock support reach families urgently to limit the scope of the deepening crisis that now involves four countries: Cameroon, Chad, Niger and Nigeria.

Some 7.1 million people are now severely food insecure across the four countries. Among them are 515 000 children who are suffering from severe acute malnutrition – a condition which, if untreated, can lead to permanent damage to a child’s development and even death.

FAO is among the UN agencies and governments attending the Oslo Humanitarian Conference today, organized to mobilize international funding for the crisis-struck region, where 80 to 90 percent of people rely on farming, fishing and herding for their livelihoods.

“In the worst-affected areas, famine continues to loom — and millions will remain trapped in cycles of severe hunger if we don’t enable farmers to start cropping now,” said Dominique Burgeon, Director of FAO’s Emergency and Rehabilitation Division, who is representing FAO at the conference. “Our collective efforts cannot be limited to merely avoiding massive famine – they need to allow people to return to a dignified life. And supporting agriculture is the key to both,” he said.

Besides reducing hunger and boosting nutrition, investing in farmers also provides much needed job opportunities that reduce migration and limit the potential for radicalization of unemployed youth, according to Burgeon.

Violence related to the armed group Boko Haram in northeastern Nigeria has spilled over to parts of neighboring countries in the Lake Chad Basin – specifically, Cameroon‘s Far North, western Chad and southeastern Niger – with devastating effects on food security and livelihoods.

With the Lake Chad Basin approaching a critical period in the agricultural calendar, FAO is urgently calling for $30 million in immediate emergency support to help farming families in the four countries get ready to plant in the upcoming May planting season and prevent them from slipping into long-term dependency on food aid.

A total of $232 million will be needed to secure food production and access to food for three million people in the worst-hit areas over the next three years. The vast majority of the requested funds – some $191 million – is designated for Nigeria, which is bearing the brunt of the crisis.

Violence has driven millions across the four countries from their homes and hampered access to agricultural lands and assets, creating massive humanitarian needs in an area already struggling with food insecurity, poverty and environmental degradation. Host communities, in particular, have been struggling for several years now to feed the displaced as well as their own.

As humanitarian access improves, revealing the magnitude of impact of the conflict, time has come to support both people who remained on their land and those who decide to return to their original livelihoods.

In Borno State alone, the population in crisis, emergency and catastrophe phases of food insecurity (Phases 3 to 5 on the five-tiered scale used by humanitarian agencies) increased from 2 million in August 2016 to 3.3 million in October-December 2016. The worst-affected in this group are not able to feed themselves and have exhausted all resources by selling off their belongings, including seeds, tools and animals. Without intervention, that number is expected to climb to 3.6 million at the height of the lean season in August 2017.

The UN foresees around 120 000 people facing famine conditions in Nigeria. Of this number, the vast majority – some 96 percent — are expected to be in Borno.

Targeting the most vulnerable

Emergency farming assistance must go hand in hand with food assistance for it to be successful throughout the upcoming lean season. To this end, FAO is collaborating with the World Food Programme to ensure vulnerable families — mainly IDPs and host communities — receive food assistance, and at the same time agriculture-based livelihood support in the form of provision of seeds, tools and fertilizer. This way, they will able to restore and protect their livelihoods and farming assets for ongoing food production.

FAO’s long-term strategy for the Lake Chad region puts a special emphasis on supporting refugees, internally displaced families and host communities, as these are the most vulnerable groups in this crisis. Interventions are geared to improving their food security and nutrition and building their resilience so they are better equipped to handle future shocks. In addition, restoring agriculture-based livelihoods will offer a unique opportunity to pave the way to recovery and peace in the affected areas.

The strategy incorporates not only provision of farming and livestock inputs but also technical training, cash transfers, instruction in natural resource management, and support in setting up community-managed funds that can reduce vulnerability to shocks.