Home Culture Tokyo Olympics go for the gold despite controversy 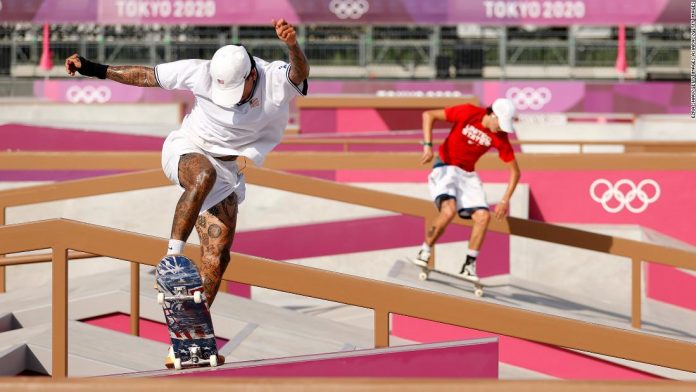 But with a worldwide pandemic (yes, that is still happening), athletes testing positive for Covid-19 and a fan favorite being left off the US track team as a result of a controversial policy against cannabis, it remains to be seen how engaged viewers will be in this year’s event.
Whether you plan on tuning in to cheer on the participating athletes or tuning out when the Tokyo Games air Friday through August 8, there is still plenty to get into this weekend.

‘Sexy Beasts’
Just when I thought I had seen it all in terms of dating shows, here comes Netflix raising (or lowering, depending on your tastes) the bar.
Contestants don animal-inspired masks, prosthetics and makeup in this new show.
As our critic Brian Lowry noted, the idea isn’t much different from other dating shows — including Netflix’s 2020 hit, “Love Is Blind” — in which physical attraction is removed from the equation in the hopes of finding true love.
But the first thing I thought of is “The Masked Singer” (thanks, Lowry, for also drawing that comparison), and I kept waiting for either someone to sing or Nick Cannon to come strolling out.
“Sexy Beasts” is currently streaming.
‘Ted Lasso’ Season 2
Fresh off of breaking an Emmy nominations record, “Ted Lasso” is back.
The comedy about a football coach recruited to coach a soccer team (which the Brits consider to be real football, in case you were unaware) has won the hearts of viewers and critics alike.
Season two finds Lasso, played by Jason Sudeikis, who is also one of the show’s writers, trying to turn the team into winners. And that’s a win for all of us who love the show.
The new season of Ted Lasso starts Friday on Apple TV+.
‘Tig Notaro: Drawn’
Of course, Tig Notaro has an animated stand-up special.
The comedian’s jokes only benefit from being drawn. How cool would it be if this special inspires other comics to do a twist on traditional stand-up?
“She’s never been this animated” is the tagline, which in and of itself is funny if you are at all familiar with Notaro’s brand of humor.
“Tig Notaro: Drawn” premieres Saturday on HBO. (CNN and HBO are both part of WarnerMedia.)

In keeping with our Olympics theme, let’s turn to someone who knows all about it.
Olympian and figure skating silver medalist Sasha Cohen has a podcast, titled “Sasha Sessions: A Team USA Podcast,” that will draw you into a competitive head space.
Cohen chats with guests from the sports world, including several fellow former Olympians and a few athletes who will compete in this year’s games.
Don’t just skate by Spotify.
The streaming service offers the “Olympic Channel Podcast,” which promises “Inspiration and motivation from the Olympics with interviews from the world’s best athletes.”
There is also a daily podcast with interviews and some of the most interesting news coming out of the games.

Exciting news is coming out of Broadway.
My CNN colleague Leah Asmelash reports that as shows start coming back this fall, seven of the new plays slated are by Black playwrights.
That’s a huge deal when it comes to the Great White Way, given that for years there has been a call for more diverse storytelling and performers.
While productions like “Hamilton” and its extremely diverse cast have grabbed headlines, last year Forbes reported that “Less than 30 percent of all the Broadway performers on stage in a recent season were members of minority groups, and representation among Latino performers has reportedly fallen to less than three percent.”
The truth is that diverse stories make for a richer experience for all theatergoers. Fingers crossed that this is a trend that will continue.

How about we finish where we started?
The Olympics are a time-honored tradition. But like many things since the pandemic started, this year feels weird.
Whereas before we celebrated the marching in of the representatives from countries around the world, the Tokyo Olympics are happening under a cloud of debate as to whether the games should be taking place at all.
Put me down for one who voted — not officially of course — for postponing until the pandemic is well and truly in our rearview mirror.
Because as much as some of the athletes, who have trained for years, have been looking forward to competing — and sports fans want to watch their favorite events — how can we fully embrace an event that is built on bringing the entire world together when there is still such disparity in both Covid-19 infections and vaccinations?