Home Culture TV OT: ‘Ted Lasso’ returns and why am I watching ‘So Freakin’... 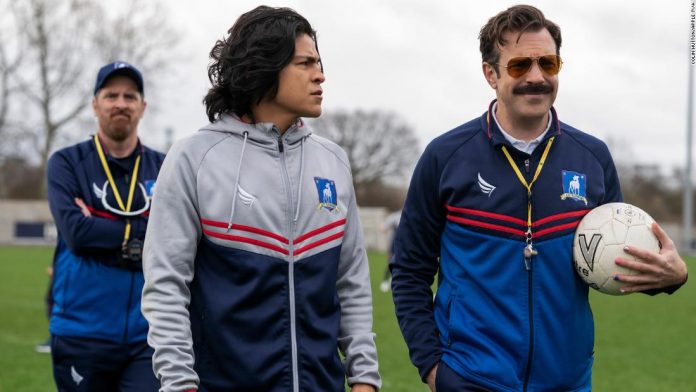 Except in the case of “Ted Lasso,” we were far from alone in our anticipation.
This much-lauded, much-awarded comedy comes back with a much-elevated buzz. Some crush under the pressure in a phenomenon known as the sophomore slump. But not only does Ted Lasso, the coach, have amazing posture, he’d probably have a folksy anecdote about how sophomore years are very important.
This and more in this week’s TV overtime.

Football is life and talking to actor Cristo Fernandez, who plays Dani Rojas on “Ted Lasso,” low-key made mine.
And we had plenty to talk about.
“Ted Lasso” Season 2 explores mental health more with the help of a new character — a sports psychologist, played by actress Sarah Niles.
Spoiler alert if you haven’t seen the premiere, which is streaming now: Sarah is introduced because Dani accidentally kills the team mascot while trying to shoot a goal. Fernandez laughed while recalling the storyline but stopped himself, saying, “I shouldn’t be laughing but I laugh because it’s funny — I think we both agree.”
“She’s going to be really important for the team and everyone in our world,” he teased.
Heading into the second season, he admitted, he felt some “nervousness” about living up to the expectations set by the incredibly popular freshman season, both on screen and off.
And even though Covid protocols complicated roughly the first half of their six months of production, he says he realized much of his nerves were “internal,” as everything seemed to fall back into place.
“Everything on set with [executive producers] Jason [Sudekis], Brendan [Hunt], Joe [Kelly], and Bill [Lawrence], I’m just learning so much from them — how they managed and how they preserved that good vibes environment,” he said. “Again, it was such a really nice experience.”

Cleaning out the queue

If you’re someone who uses Emmy nominations to freshen up your streaming queues, join the club. Normally I wouldn’t tell you what I haven’t watched because I don’t want to be shame-belled on Twitter. But in the spirit of transparency, I’ll tell you one: “WandaVision.”
Maybe you can empathize with why, though.
As human beings, I think it’s important to acknowledge our own emotional limitations. I don’t know many details about “WandaVision” — which my colleagues have covered wonderfully — but I know that the show tackles the issue of grief. That, combined with my knowledge Wanda’s MCU filmverse journey, gives me enough information to infer the emotional part of the premise.
I, like so many, have experienced loss in my life. And though my father died several years ago, it’s still very much something that comes up in therapy frequently and can be a live wire in my daily life. (Looking at you, company that sent to my home an auto-mailed ad addressed to my father.)
In short, I’m still dealing. With the pandemic last year and missing him and everyone, my mode was more hearts and rainbows than heartache. As conversations about the show took place, I felt a little like a failure. Because I’m not strong enough, I’m bad at my job and missing an important cultural moment.
That, of course, was not true, but it feels like it is at the time.
All this to say, give yourself grace when you think you might be missing out on a television zeitgeist moment — whatever the reason may be. 1) It’s just TV. 2) Everything is on the internet and will be there waiting for you when you’re ready. 3) You’re never alone. We’re all always catching up on something and there will always be someone there to talk about it with.
To those who haven’t watched “WandaVision”: Should we start together?

Is anyone else watching…?

In other programming news, my husband has gone back to the office after months of us working at home together. I miss him, but I do enjoy having my trash television on in the background while I work again.
My latest discovery — found in the depths of TLC’s lineup — is a show called “So Freakin’ Cheap.” (This is not to be confused with the network’s show “Extreme Cheapskates,” which has been on the air for many years.)
In the premiere, we meet families who go to extreme lengths to save money. One mom is trying to plan her daughter’s wedding for a budget of $750. (For those who don’t speak wedding industry, that’s, like, a cake.) In another episode, the same mom spoke about how she used to reuse contraceptives. I won’t elaborate.
Casting directors, I bow to you.

Can we please talk about “Sexy Beasts”?
The premise of this ripped-from-your-nightmares show is simple, as CNN’s Brian Lowry explains in his review:
“In every episode, a participant in heavy prosthetic makeup is presented with three potential matches, each similarly adorned in different guises. The idea is for the chooser to get to know the candidates without being unduly influenced by looks (Netflix really likes this construct), before the big reveal when he or she and the audience gets to see what the bachelors/bachelorettes actually look like.”
But he points out one big flaw, writing, “there’s an inherent cheat built into the format, lacking even the courage of its slim conceit, since everyone — stripped of their prosthetic appliances — is attractive by conventional standards and those of the genre. In one episode, the bachelorette announces that she’s a model, and she’s not wearing a sackcloth, so as dice rolls go betting on whether she looks OK once she removes the mask isn’t much of a gamble.”
I’m with him. Call me when they start throwing some actual twists in there — like an episode where someone with antennae reveals they aren’t wearing any makeup at all.

I’m about to dive in on the last episodes of “My Unorthodox Life.” This Netflix reality series is about Julia Haart, Elite World Group CEO and a former member of an ultra-Orthodox Jewish community, who left that life in her 40s and is now very rich and very dedicated to wearing high-heeled shoes.
Some of Haart’s characterizations of her past experiences have drawn criticism from members of the orthodox Jewish community and Haart herself is somewhat of a polarizing figure. We might dive into this next week, depending on how I feel about these final episodes. Or I may just try to wipe the series from my brain with one of those “Men in Black” devices.

[embedded content]
Do you ever watch a trailer and think, “There’s no way this sucks”?
I give you the trailer for “American Rust,” a Showtime series starring Jeff Daniels as a chief of police whose principles are tested by a complicated murder case. Maura Tierney also stars. It premieres September 12.

Is there a support group for...

People who get anxiety from the “White Lotus” theme music? If not, I’ll start one.