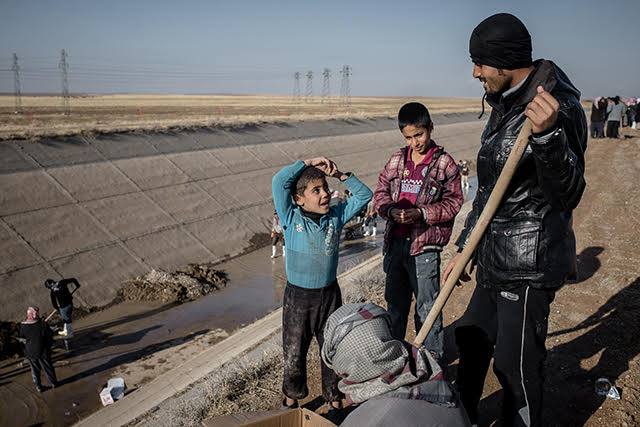 Some 200 000 people from Mosul and across Iraq will be able to earn an income for the first time since the Islamic State of the Levant (ISIL) took parts of the area in 2014, thanks to a new FAO project that is restoring irrigation to 250 000 hectares of farmland.

Water will soon be flowing again through the canals that used to feed the once-fertile land some 30 km west of Mosul – Iraq’s third largest city. Through the cash-for-work component of the project, FAO supports vulnerable families who need money for daily needs, including food and clothes, heating and transport. Many of them have not had paid employment for at least two years.

Participants are clearing the main canal of the northern Al Jazeera irrigation scheme of dirt, stones and debris, which will allow it to again feed small canals throughout the farming landscape.

FAO has also repaired the pumping station that feeds the canal system from Mosul Dam. And, for the first time, the agency is collaborating with a demining company to clear valuable farmland around the canals of undetonated ordinances, so farmers can plant crops and graze their livestock safely. The project is already benefiting more than 3 000 people and is essential in getting farming activities in the area back underway.

“Farmers here haven’t been able to grow vegetables for two years, since the irrigation canals were destroyed by armed groups who also contaminated the area with explosive devices,” said Fadel El-Zubi, FAO Representative in Iraq. “Restoring people’s ability to farm and trade in this area is not only important for food security but also for building prosperity and lasting peace in the country,” he added.

Farmers in the region used to export vegetables and crops, including wheat and barley, to Syria and other countries, as well as supplying millions of people in Iraq. Now the country relies on fruit and vegetable imports.

“We collect debris in piles, and then merge every four piles into one big one for the excavator to pick up and remove from the canal,” said 23-year-old Ahmed Mohammed, a father of three. “My brother has agricultural land and he’ll benefit from the project as well. He used to grow wheat and barley in the winter and vegetables at other times. Now he can only grow vegetables when the rain falls.”

The Al Jazeera irrigation scheme used to be an essential source of water for agriculture, livestock and domestic use. Some 100 smaller canals in the system were damaged, bridges were also blown up and the damaged pumping station was working under capacity, resulting in extreme water shortages.

As the Government of Iraq retakes control of more areas, a major effort is needed to rehabilitate critical infrastructure so that agricultural production can resume and livelihoods can be restored. FAO is seeking urgent funding of $89 million to strengthen its emergency response, including rehabilitating damaged agricultural infrastructure, supporting farmers to vaccinate and feed their livestock, and expanding cash-for-work and other income-generating activities. FAO’s work, in coordination with the Iraqi government, supports families returning to reclaimed areas, internally displaced families, host communities and refugees from Syria. The current project on the Al Jazeera irrigation scheme is funded through the United Nations Development Programme (UNDP).