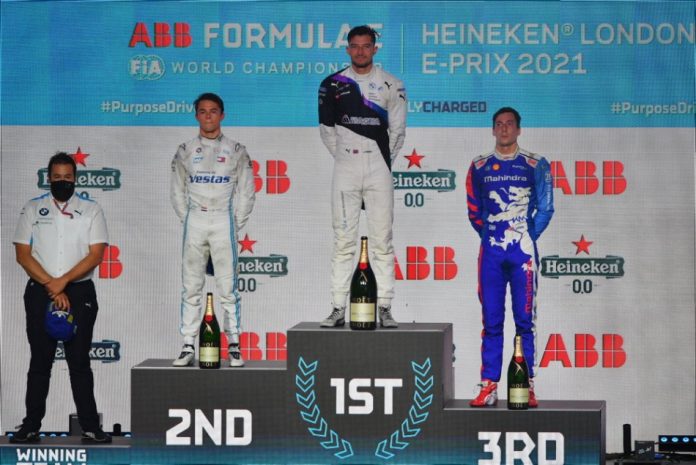 Jake Dennis produced a sensational drive in the first leg of the London E-Prix as the British driver scored a home victory in the first of two ABB FIA Formula E World Championship races this weekend.

The BMW i Andretti star held station off-the-line as the young Briton set about hounding pole-sitter and fellow countryman Alex Lynn (Mahindra Racing) for the first half of the race.

Lynn defended valiantly as the lead duo simultaneously took their first ATTACK MODE barely separated by half a second on-track, before a change of strategy thereafter handed the advantage to Dennis.

Dennis nipped by as Lynn took the wider line to activate his second ATTACK MODE, and the former never looked back as he cruised clear to claim a second Formula E win after Valencia in his rookie season.

Incredibly, the result and subsequent points haul has vaulted Dennis up to third in the overall standings – just two points off the championship summit with only three races of the campaign remaining.

Mercedes man De Vries made his move late on to snatch second, with Lynn completing the podium positions.

Buemi finished fourth on the road, but both he and Nissan e.dams team-mate Oliver Rowland were disqualified post-race for using energy over the regulated limit.

André Lotterer produced a hard-earned and much needed fourth for Tag Heuer Porsche, whilst it was line astern for Audi Sport ABT Schaeffler in fifth and sixth as René Rast held off team-mate Lucas Di Grassi in a race-long battle.

Stoffel Vandoorne scored solid points for Mercedes-EQ in seventh as the German manufacturer reignited its challenge for the Teams’ championship, moving up to fourth following an impressive day in London.

Just 15 points now separate the top six teams with DS TECHEETAH holding the lead at the top of the order.

With many of the main Drivers’ championship challengers languishing down the order, it proved to be an important eighth place finish for António Félix da Costa (DS TECHEETAH) as the reigning champion made stellar pass-after-pass to bring home some points, which could prove vital come the end of the season.

Jaguar Racing endured a dismal day on home soil as Sam Bird retired following contact on the opening lap, although the Briton was somewhat relieved to hang on to the championship lead with another race to come tomorrow.

This enthralling ABB FIA Formula E World Championship is building towards an exciting climax with the top nine racers blanketed by just 13 points in the standings, although more than a dozen drivers remain in contention.

As ever, it has been yet another ground-breaking weekend for the ABB FIA Formula E World Championship with the London E-Prix proving to be the world’s first ever FIA-sanctioned indoor/outdoor motor race, as the unique circuit layout runs inside the ExCeL London before blasting out into the light and taking to the Tarmac around the famous venue.

This wasn’t the only pioneering example of the weekend, as the London E-Prix also hosted the first FIA Girls on Track event of 2021 – the FIA Women in Motorsport Commission’s grassroots programme for young women between 8 and 18 years old.

Earlier this year, the FIA and Formula E announced a six-year extension to their original collaboration on the FIA Girls on Track programme, and London kicked off the action, with the event benefitting countless young women and providing them with unique access to the exciting world of motor sport.

The on-track action is far from over this weekend with the second leg of the ABB FIA Formula E World Championship London E-Prix taking place tomorrow (25 July).

BMW i Andretti Motorsport
Jake Dennis
“After such a strong qualifying, to now get the win is just sensational. I made a special helmet for this weekend, a British helmet and I’m just over the moon. It was a brilliant job by the whole team. We took a risk with the strategy, we could have played it safe but we felt like we had better pace than Mahindra and it paid off. Because it wasn’t such an energy limited race, I could do five laps fully pushing and this allowed me to create the gap to Lynn. After I saw him make a mistake at turn 10, I thought ‘here we go for the win’. I just needed three qualifying type laps and managed to do it and get that 2 second gap and take the win. I’m over the moon.”

Mercedes-EQ Formula E Team
Nyck de Vries
“I made use of Fanboost very well today to secure second place and Alex was very kind in that overtake moment as I think he thought we were a bit stronger at that point in the race. It’s great to come back after a pretty difficult time – partly due to own struggles, but also some things out of our control, so it’s really nice to come back here and score a podium, particularly in the way we did it. We felt strong and competitive yesterday and also from qualifying and the wet running today so very pleased to give this back to the team.”

Mahindra Racing
Alex Lynn
“It’s a decent job, we got pole – finished third – with solid pace, but we didn’t have enough for Jake & Nyck. We know the race isn’t our strongest forte, so we have got to be happy with that.”