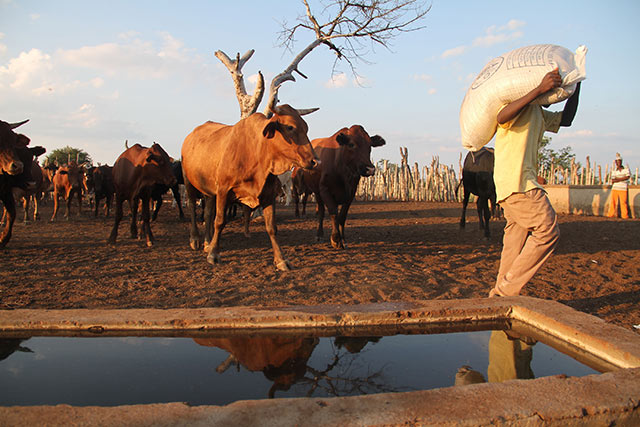 The livestock industry is one of the fastest growing sectors of the agricultural economy, contributing approximately 40 percent of the global value of agricultural production. Most of this growth is in response to global changes, such as a growing and increasingly urbanized human population, accompanied by an increase in meat consumption.

This trend is also reflected in Southern Africa where livestock production contributes up to 40 percent of agriculture GDP in some countries. Of increasing importance is the contribution of livestock to household income, food and nutrition security. For most of the smallholder farmers and pastoralists, livestock is essential for diversifying income sources, investment and risk management, providing manure/fertilizer, draught power, and transportation as well as for social and customary functions.

Lately, however, livestock production in the region has been severely affected by evolving climatic patterns that have resulted in an upsurge in livestock diseases, rangeland degradation, and limited access to water. The 2015/16 El Niño-induced drought resulted in more than 640,000 livestock deaths, mainly in Lesotho, South Africa, Swaziland, and Zimbabwe. Outbreaks of anthrax were reported in Lesotho and Zimbabwe, and Foot and Mouth Disease (FMD) outbreaks, in northern Namibia, southern Angola and Zimbabwe. It is not surprising therefore that livestock-related interventions are a crucial component of emergency agricultural responses.

Findings from livestock needs assessments conducted recently in several countries in the subregion, revealed the limited capacity of in-country agencies and government staff involved in the design, implementation and assessment of emergency livestock programs, to effectively respond to the effects of El Niño on the assets and livelihoods of vulnerable livestock keepers. In addition, the findings showed significant/serious gaps in the governments and partners capacities to prepare for emergencies, design and implement response and recovery interventions.

“Just like human beings, livestock are directly affected when disasters occur. They are killed, injured, or may be short of food, water, shelter and health care. However, experience has shown that humanitarian actors do not give livestock owning communities and their livestock as much attention as other sectors and this needs to be reviewed”, said Patrick Otto, FAO Head of Livestock Development in Southern Africa.

As part of its commitment to supporting governments, development partners and livestock value chain actors in the subregion, FAO, conducted the first regional three-day training in Livestock Emergency Guidelines and Standards (LEGS). The training affirms FAO’s support to save lives and livelihoods of livestock owning communities affected by disasters, and its efforts to address knowledge gaps by building the technical capacity of decision makers, and livestock and humanitarian experts in the subregion.

The LEGS is a set of international guidelines and standards for the design, implementation and assessment of livestock interventions to assist people affected by crises. Twenty-six participants, from Lesotho, Madagascar, Malawi, Mozambique, Namibia and Swaziland, Tanzania, South Africa, Zambia, Zimbabwe and Eritrea took part in the training.

Welcoming the participants to the training workshop, Lewis Hove, the FAO Representative for South Africa a.i, said, “we can’t stop weather-related disasters from happening, as such, the resilience of livestock owning communities needs to be strengthened. The LEGS gives guidance on prioritizing the most appropriate, feasible and sustainable livestock interventions in responding to natural disasters that affect the livestock sector in the subregion. These interventions range from providing animal feed, water, health care, and shelter, as well as instituting destocking and restocking programs where appropriate”.

“After this training, I hope your approach to the next disaster will be different, as you now have the requisite skills to design and implement appropriate livestock drought mitigation programs’, he added.

The training was timely, as it took place against the backdrop of the worst El-Niño-induced drought that has affected the southern Africa region in 35 years. “South Africa’s land is suitable for livestock production. Unfortunately, the performance of the sector has been undermined by climate variability. I will use the LEGS principles to plan better, in order to safeguard and protect the livelihoods of livestock keepers and their livestock”, said Joel Mamabolo, Director – Animal Production of the Department of Agriculture, Forestry and Fisheries of the Republic of South Africa.

“What I take away from this training is that coordination and consultative participation of all stakeholders, including the communities affected by disasters, is very important when designing interventions for the livestock sector”, said Daniel Hakweenda, Namibia Agriculture Scientific Officer.

Thierry Randriarilala, a Project Officer with FAO Madagascar said using the LEGS approach would help Madagascar to design the most appropriate interventions for the southern part of the country that is currently experiencing a protracted drought and where the majority of farmers are livestock keepers. “The training has given us alternative interventions that we shall incorporate into our programmes”, he said.

Increased commitment to and demand for LEGS training

Representatives of the participating countries also committed to advocating for the integration of livestock interventions in their national disaster and development plans. Elma Sikala, the Lead Trainer, noted that FAO was already receiving requests for in-country LEGS trainings from the subregion. “There is obviously now a greater appreciation by development and humanitarian actors, on the important link between livestock, livelihoods and emergencies”, she said.

The training was conducted, as part of the project implemented by FAO with funding from the United States Agency for International Development (USAID) and aims to safeguard livestock-based livelihoods, support the recovery of agricultural production and boost household and national food security in the region.