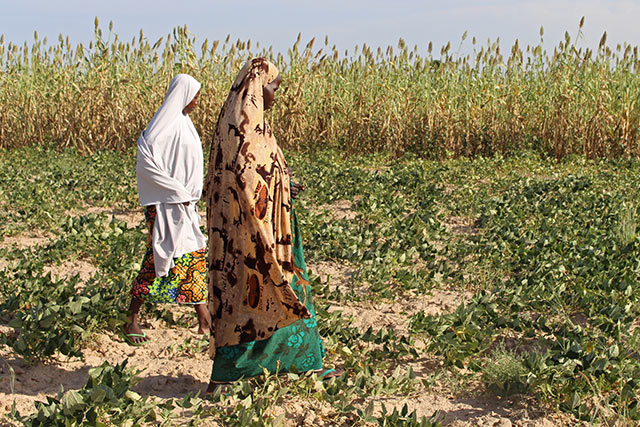 Emphasizing the extent of the devastating tragedy in northeast Nigeria, today the United Nations launched an appeal for USD 1 billion to respond to the biggest humanitarian crisis in Africa. FAO’s Emergencies and Resilience Coordinator, Dominique Burgeon, together with emergency experts from the Government of Nigeria, WFP, OCHA, UNHCR, WHO, IOM, UNICEF, UNDP and UNFPA spoke to the press in Abuja, delivering the urgent message for life saving intervention.

The plan – called the Humanitarian Response Plan (HRP) – outlines that food security is the number one issue facing the 26 million people affected by the crisis. In the three states where the need is greatest, 8.5 million people face such dire food shortages that the UN fears that 75 000 children could die without immediate intervention.

“Farmers have lost the ability to cultivate for the third year in a row,” said Zainab Ahmed, Nigerian Minister of State, Budget and National Planning. “We need to break that vicious cycle”. FAO’s Burgeon said that the importance of food security cannot be understated. “This is an emergency of extraordinary urgency,” he said. “We have to feed people immediately, but we must also make sure as an absolute priority that people are given the means to return to their livelihoods as quickly as possible.”

The states hardest hit by the crisis are Adamawa, Borno and Yobe which are overwhelmingly agricultural. Families, communities and the economy depend on crops and livestock. “If farmers lose the ability to cultivate or look after their cattle it is a major catastrophe with far reaching effect,” said Burgeon. “It can lead to the complete collapse of society.”

As part of the call for a total of USD 1 billion, FAO is appealing for USD 62 million to help displaced and the communities that host them, to rapidly restore food production. FAO has been scaling up its operations in the three most affected states – with more staff arriving weekly to support the live saving outreach. The HRP is an OCHA-led initiative that brings together UN agencies and NGOs to prioritize needs and response to a protracted or sudden-onset crisis.