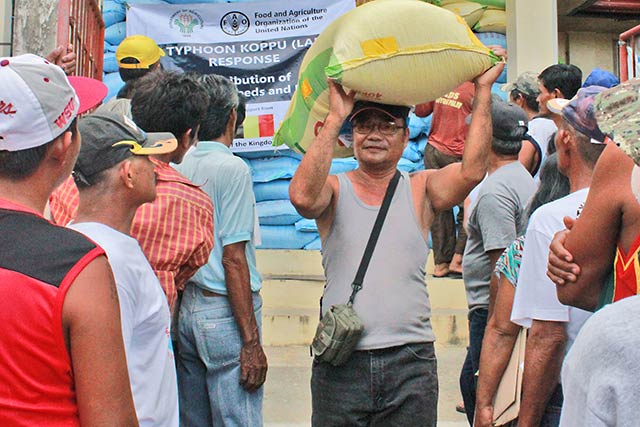 The Department of Agriculture (DA) and the Food and Agriculture Organization of the United Nations (FAO) inaugurated the country’s first Disaster Risk Reduction and Management Operations Center (DRRM) for agriculture.

Envisioned to be a monitoring hub for natural calamities that pose a threat to the agriculture sector, the centre will serve as a crucial platform for decision makers and experts to enhance national preparedness and to coordinate response activities related to agriculture.

“In 2015, DA and FAO took a major step together in formulating the country’s first Strategic Plan of Action for DRR in Agriculture and Fisheries. In 2016, we launched the Integrating Agricultural Sectors in the National Adaptation Plan (NAP-Ag) Programme, which seeks to enhance the country’s institutional capacity to operationalize climate adaptation and disaster response strategies. It is in this Operations Center that we will see these plans and strategies action,” said FAO Representative in the Philippines José Luis Fernández.

The facility, which is located at the DA compound in Quezon City, was renovated, fitted and furnished with essential risk and disaster monitoring and assessment tools and equipment through funding provided by FAO and its development partners, including the German Federal Ministry for the Environment, Nature Conservation, Building and Nuclear Safety and the European Commission’s Humanitarian Aid and Civil Protection or ECHO, among others.

“Our country is vulnerable to disasters and natural calamities. We have experienced some of the worst cases of strong typhoons here such as Pablo [Bopha], Yolanda [Haiyan], and the recent Typhoom Lawin [Haima] and El Niño, which heavily affected agricultural industries and production,” said DA Undersecretary Cayanan, who delivered a message on behalf of DA Undersecretary for Policy, Planning Research and Development and Regulations Segfredo Serrano.

“The establishment of the DA DRRM Operations Center through Special Order No. 816 is a testament that DA is seriously working on a more precise, substantive and effective DRRM in agriculture and fisheries. The center will ensure that all of DA’s DRRM-related activities, plans and programmes are properly implemented and sustained, as well as effectively managed and institutionalized,” he added.

In the Global Climate Risk Index 2017 published by GermanWatch, the Philippines ranks as the fifth most affected country in the world by climate-related disasters between 1996 and 2015. Government estimates cite that almost within the same period (1995 and 2013), the agriculture sector absorbed, on average, 27 percent of the negative economic impacts caused by natural hazards and disasters. This rose to 37 percent within 2010 to 2013, when some of the world’s strongest and most destructive typhoons swept the country, including Typhoon Washi (local name: Sendong) in 2011, Typhoon Bopha (local name: Pablo) in 2012 and Typhoon Haiyan (local name: Yolanda) in 2013.

In the coming years, disasters and climate extremes are expected to impose greater risks to the livelihoods of farmers and fishers, as well as the country’s food and nutrition security. Government-led assessments also found that least 60 percent of the country’s land area is vulnerable to multiple hazards such as typhoons, floods, droughts, earthquakes, tsunamis, volcanic eruptions and landslides, among others.

“The DA DRRM Operations Center will be instrumental in preparing the agriculture sector to tackle disasters and risks so that losses can be minimized, recovery and rehabilitation activities more quickly and effectively mobilized, and long-term resilience ingrained at all levels,” Fernández said.

Specifically, the centre will enable progress in the preparation and use of early warning forecasts, modern decision support tools, climate information and prediction systems and more capable institutions.

FAO’s disaster risk reduction and management (DRRM) and climate change adaptation (CCA) work in the Philippines focuses on building the resilience of vulnerable farming and fishing communities to both natural and man-made disasters, and enhancing the Government’s capacity to address threats and respond to crises.

In recent years, FAO worked closely with DA, the Department of Agriculture and Fisheries in the Autonomous Region in Muslim Mindanao, local government units and other relevant agencies in restoring agriculture and fisheries-based livelihoods affected by El Niño, typhoons, flooding and conflict. FAO has also been at the forefront of promoting best practice options, climate-smart methods, early warning systems and tools, innovative multi-hazard protocols, multi-stress tolerant crop varieties and modern geospatial technologies such as drones for pre-and post-disaster assessments. FAO also provided technical assistance in the formulation the National La Niña Action Plan for the agriculture sector and the national Strategic Plan of Action for DRR in Agriculture and Fisheries, among others.