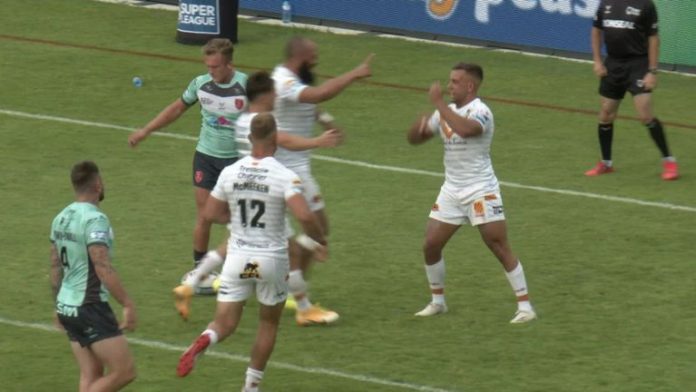 McNamara was pleased with the win over Hull KR, but frustrated his side had to come from behind for the third game in a row; “We seem to have created a bit of a habit that we need to get out of very quickly,” the Dragons head coach said

Steve McNamara was far from impressed with Catalans Dragons’ performance despite them setting a club-record 10 Betfred Super League wins in a row.

The Dragons came back from the dead for the third week in a row with a second-half blitz that blew away Hull Kingston Rovers to secure a 32-30 victory after trailing 26-12 at the break.

They are also counting the cost with a potential broken arm for skipper Ben Garcia, although are awaiting the results of an X-ray to determine that.

Catalans make it 10 in a row with comeback

Catalans Dragons came back from the dead for the third week in a row with a second-half blitz which blew away Hull KR.

“Of course, I’m pleased that we won but I’m really unhappy with the performance,” Dragons head coach McNamara said.

“In the last three games, where we’ve had to come back, we have had to be very disciplined but it’s quite clear that we are not at the top of our game. We seem to have created a bit of a habit that we need to get out of very quickly.

“There’s going to be a lot of frustration among the players and we need to work with that before our next performance.”

Scrum-half Jordan Abdull bombarded the table-topping French side with a series of high kicks to put Rovers 14 points in front at half-time but it was not enough to resist a late onslaught from the Dragons.

Rovers were first to score through Abdull but the Dragons hit back when second row Matt Whitley gleefully collected to stroll unhindered between the posts, Arthur Mourgue converting to level it at 6-6.

The Robins struck back when Shaun Kenny-Dowall mopped up a fumbled high kick by Tom Davies to cross the line but Sam Tomkins responded for the Dragons with a side-stepping dash to the left of the posts for a try, Mourgue converting to level the scores once more.

Abdull’s bombing mission continued when a steepler bamboozled Tomkins for Greg Minikin to collect and swoop between the sticks, then Adam Quinlan raced 50 metres to make it 26-12 at half-time.

Whitley and Abdull then picked up their second tries before the Dragons’ comeback began when Kasiano found Mickael Goudemand to put the French international second-row over the line. Fouad Yaha added another before Mourgue pinched a narrow win for the Dragons.

“I was pleased with the effort but not so much with the overall performance. I thought we controlled the game really well in the first half,” Hull KR coach Tony Smith said.

“But we had really poor control and discipline in the second half which was really disappointing in terms of where we want to be at this stage of the season.

“We had a great opportunity there to turn our opponents over but all credit to Catalans for fighting back so strongly. It’s difficult to lose a game like that, particularly when you’ve played so well in the first half with some great individual performances. But collectively in the second half, we weren’t great today.

“I’m not making any excuses saying we were rusty or anything and we’ve learned some really pertinent lessons in that second forty and we will take that into the next couple of weeks for sure.

“So, we’re not going to sulk about it or get carried away with either aspect of our game today, we’ll just soak it up, learn from it, and put it into Thursday.”