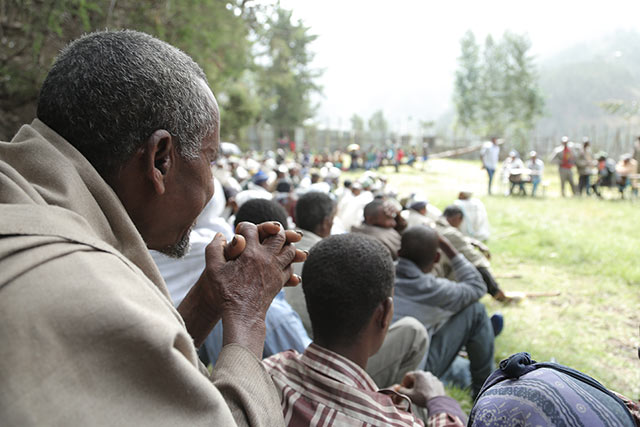 Ethiopia has completed the most widespread and impressive seed distribution campaign ever undertaken during an emergency in the country’s history. The Food and Agriculture Organization of the United Nations (FAO) and over 25 NGOs and agencies reached 377 woredas across six regions with a historic 32 000 tonnes of seed. The seed provided restored depleted household supplies after a catastrophic El Niño induced-drought crisis in 2015 and 2016. As a result of the campaign, Ethiopia’s Government and humanitarian community saved close to USD 1 billion by enabling farming households to grow their own food, independently.

The crop seed provided by FAO, NGOs and other organizations, at 30 kg per household on average, can enable a family of 5 to produce food lasting anywhere between 10 and 11 months with a yield of 1 to 1.1 tonnes for a half-hectare farm. It would cost an estimated USD 864 to distribute the same volume of food to one household, while the seed provided, plus production expenses, cost a fraction of that amount – only USD 230. This results in potential savings of USD 634 for each family. The total savings of the entire emergency meher seed response, reaching 1.5 million Ethiopian households for 10 to 11 months, amounts to over USD 950 million. 23 million pieces of cuttings (of crops such as Irish and sweet potato) were also widely distributed.

The United States Agency for International Development (USAID) was the largest provider of seeds to the international effort, contributing approximately 13 100 tonnes of emergency seed and 8 million cuttings through their NGO and international organization partners. Other major donors include the European Union, the Governments of The Netherlands, United Kingdom among others.

Some of the worst-affected Ethiopian households now have the vital seed and cuttings needed to spruce up their production of cereals, vegetables and other crops during the critical meher, or summer season, from which Ethiopia obtains up to 85 percent of its local food production. The seed distribution was essential in resuscitating household seed supplies and enhancing food and nutrition security in the wake of the worst drought in decades.

The seed and cuttings were distributed by a diverse group of partner organizations under the umbrella of the Emergency Seed Working Group, chaired by FAO and the Government of Ethiopia. The Working Group is an extension of the Disaster Risk Management Agriculture Taskforce (DRM-ATF) which FAO also co-chairs with the federal government through the National Disaster Risk Management Commission.

In the event of an emergency such as the 2015/2016 El Niño-induced drought, the role of the DRM-ATF is to coordinate response and recovery interventions, and ensure that activities are complementary and do not overlap. The DRM-ATF is made up of Government and UN Agencies, NGOs and resource partners such as government donor agencies.

FAO and partners recently published an assessment of the effectiveness and level of satisfaction of communities regarding the emergency seed response. Some 820 households were interviewed and 207 focus group discussions undertaken between August and September.

Well over 90 percent of community members stated that they were very satisfied with the seed and/or cuttings they received, that it was delivered on time for the meher season and that they planted all the seed they received. Almost half of households reported that without the seed provided, their livelihoods would have been severely affected, underscoring the critically important nature of the intervention.

FAO, through several meetings and bilateral discussions, was instrumental in rationalizing agriculture and livestock sector needs and key in mobilizing global funding for seeds in Ethiopia. The Organization raised USD 14 million for the crops and livestock sector response. In the crops sector, FAO distributed 4 000 tonnes of seed, in six regions, targeting the worst-affected communities not covered by other implementing partners. In order to support livestock-based livelihoods in regions Afar and Somali, the Organization carried out animal health treatments, vaccinations, support for fodder production and animal feed distributions in 2015 and 2016. Close to 1.3 million farmers and livestock owners have benefited from FAO’s drought-related interventions since 2015.

“Through an effective coordination between the humanitarian community and the Government, millions of farmers were able to receive the assistance they needed at the right time,” said Amadou Allahoury, FAO Representative to Ethiopia. “Despite our recent gains, we must never lose sight of the fact that Ethiopia is prone to drought and this reality will only worsen with a changing climate. FAO will continue to partner with the Government to implement adaptive practices that will ensure more resilient agriculture-based livelihoods for rural communities,” said Mr. Allahoury.

Ethiopia needs further support to protect the new-found gains of what is expected to be a good meher harvest. Crop pests and diseases such as locust and wheat rust are cause for concern, particularly in the south. Other post-harvest loss challenges include poor storage facilities and handling of crops persist across the country. FAO is also appealing for greater action to support livestock-based livelihoods, more than 2.4 million livestock-owning households need urgent assistance in order to improve their production of meat and milk – the cornerstone of their diets and incomes. The Organization is currently appealing for USD 14 million to meet the immediate needs of the worst-affected.