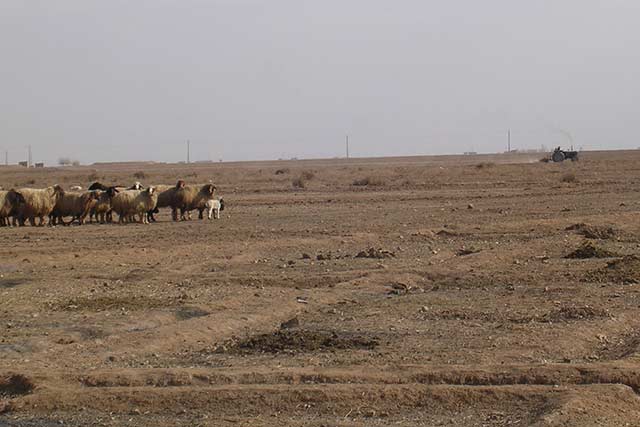 Food production in Syria has hit a record low as widespread insecurity and unfavourable weather conditions in parts of the country continued to hamper access to land, farming supplies and markets, making it ever more difficult for farmers to maintain their livelihoods and feed the war-torn country.

The latest Crop and Food Security Assessment Mission (CFSAM) conducted by the Food and Agriculture Organization of the United Nations (FAO) and the World Food Programme (WFP) shows that after five years of conflict many farmers have lost the ability to cope. Rising prices and scarcity of essential inputs such as fertilizers and seeds mean they will have no other option than to abandon food production if they do not receive immediate support. This will likely have grave consequences not only for the food security of farming households but also on food availability in the country, and may ultimately lead to further displacements.

Cereals at an all-time low

The area planted to cereals in the 2015-16 cropping season is the smallest ever, according to the report, based on field visits and surveys across the country. Farmers planted an estimated 900,000 hectares of wheat in the last year, compared to 1.5 million hectares planted before the crisis. Production, meanwhile, shows an even more drastic decline, from an average 3.4 million tonnes of wheat harvested before the war to 1.5 million tonnes this year – a decrease of 55 percent. Because the ongoing crisis and associated sanctions have disrupted trade and markets, access to quality seeds, fertilizers, machinery and fuel needed to operate pumps and tractors is limited. Those inputs that are available on local markets are frequently overpriced and of dubious quality.

Poor rainfall and the destruction of valuable irrigation infrastructure has made matters worse for growers trying to continue to produce food under adverse circumstances. In some instances, this has led farmers to switch from cultivating valuable and nutritious crops to hardier but less nutritious ones. At the same time, the assessment showed vast differences among the governorates in terms of access to land and agricultural inputs − a sign of possible opportunities to intensify support to producers in areas that are relatively accessible.

“Today, we see almost 80 percent of households across Syria struggling with a lack of food or money to buy food – and the situation is only going to become worse if we fail to support farmers so they can maintain their lands and livelihoods,” said Abdessalam Ould Ahmed, FAO Assistant Director-General and Regional Representative for the Near East and North Africa. “Agriculture was the main source of livelihood for rural households before the crisis and it is still producing to a certain extent, but it is stretched to the maximum and farmers have largely exhausted their capacity to cope,” he added.

“The food security situation of millions of people inside Syria continues to deteriorate with more than seven million people classified as food insecure across the country having exhausted their life savings and no longer able to put food on the table for their families,” said Muhannad Hadi, WFP Regional Director for the Middle East, North Africa, Central Asia and East Europe. “WFP and FAO are working together to invest in more livelihood projects in agriculture as the most effective way to address food insecurity in the long term.”

Livestock producers are equally feeling the effects of the crisis. With the upkeep of their animals becoming ever more difficult and costly, many herding families have been forced to sell or slaughter their sheep, goats and poultry.

Ongoing fighting and widespread insecurity continues to limit access to grazing land and water sources, while animal feed has become unaffordable for many pastoralists. This is particularly true in areas with large numbers of internally displaced people who brought their livestock with them when fleeing their homes. The country’s veterinary service, meanwhile, is rapidly running out of animal vaccines and routine drugs, making it harder for herders to keep their animals healthy and productive.

As a result, Syria – once an exporter in livestock – has seen its herds and flock shrink significantly since the beginning of the crisis. Today, there are 30 percent fewer cattle, 40 percent fewer sheep and goats, and a staggering 60 percent less poultry − traditionally the most affordable source of animal protein in the country.

General shortages and cuts in fuel and some food subsidies have added to rising inflation and depreciation of the Syrian pound − from 395 to 530 per USD − further limiting Syrians’ ability to afford essential imports.

Over the last 12 months, prices of agricultural and livestock products increased. Due to economic sanctions, market disruptions and the declining value of the Syrian pound, prices of farming inputs have risen sharper than final products. As a result, farmers are incurring heavy losses.

Transportation bottlenecks and fragmented markets prevail, as producers, transporters and traders are facing extremely high costs and security risks. This has resulted in surplus supply in the northeast while the west largely relies on imports. Urgent support is therefore also needed to connect in-need communities with surpluses in other parts of the country, including by purchasing local stocks for food assistance deliveries.

Increased supply, thanks to newly harvested crops and airdrops of food assistance into the besieged city of Deir Ezzor, brought down the price of wheat flour by 12 to 15 percent in several key markets in June 2016.  But wheat prices were nevertheless between 40 and 50 percent higher in June when compared to the same period last year.

Because the conflict has greatly reduced the government’s capacity to procure and distribute high-quality seeds at subsidized prices, many farmers are being forced to deplete their seed stocks, borrow from relatives and neighbours, or purchase expensive seed from the market.

To help families continue to grow food and raise livestock, FAO in 2016 has so far supported over 500,000 people with distributions of cereal and vegetable seeds, live poultry for backyard farming, animal feed and vaccination campaigns.

Since 2011, the conflict has displaced close to 11 million people, with 4.8 million fleeing to neighbouring countries. Many of those internally displaced within Syria have been displaced multiple times.

WFP provides food assistance to more than 4 million vulnerable Syrians every month inside Syria. About 30 percent is delivered to besieged and hard-to-reach areas across Syria through cross-border and cross-line deliveries.

A large share of Syria’s livestock farmers are among those who moved to safer areas, bringing their livestock with them. For crop farmers across Syria, however, few options remain but to try to continue working their fields or alternatively abandon their only source of income for an uncertain future among the millions seeking safety in increasingly overburdened host communities elsewhere.

According to the latest household surveys, some 9.4 million people across Syria are in need of assistance – some 716,000 more than in September 2015. The governorates with the biggest increase of people in need are Quneitra, Dara’a, Damascus, Idleb, and Aleppo.