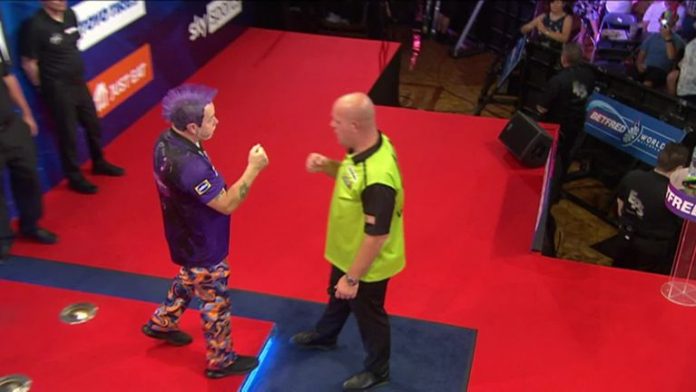 By Cameron Hogwood at the Winter Gardens, Blackpool

Snakebite, who hosted Van den Bergh amid travel restrictions during the height of lockdown, took control in a defining session that saw him win four legs in just 45 darts before turning on the style to romp to victory with the highest average ever produced in a World Matchplay semi-final.

Earlier in the night Van den Bergh won 15 of the last 18 legs, including a run of eight straight legs from 6-2 down, to book his return to the final on Sunday where he will attempt to become just the fourth man to defend the Matchplay title after Rod Harrington, Phil Taylor and Van Gerwen.

Michael van Gerwen had no answer for the sheer brilliance of Peter Wright as Snakebite recorded a stunning 110.66 average to down his famous foe 17-10 with arguably the most impressive performance of the tournament.

Wright was rampant out the blocks as he pinned double 18 for an 11-dart break for 3-1 while averaging around the 112 mark, before taking out 121 on double 18 for a 12-darter to garner a three-leg cushion.

Having pinned double 16 to take out 74 and move three legs clear, Snakebite teased a special nine-darter with six perfect darts only to surrender the leg at the hands of a ruthless 81 finish from Van Gerwen, who then matched that checkout to move within one.

The Dutchman scuppered the chance to level it up with three misses at double 16, Wright instead pinning double three for a break and a 6-4 lead.

Wright proceeded to inflict one of the most devastating sessions in recent Matchplay memory, reeling off a 13-darter before going one shy of a perfect nine-dart leg and following up with back-to-back 11-darters for 10-4 while averaging 113.74. Five contradictory missed darts at double 16 then paved the way for Van Gerwen to salvage some hope for 10-5 after he had missed bullseye by a whisker for a 164.

The next session belonged to The Green Machine, who having mopped up 127 for 10-6 while averaging 105 closed the gap with an 11-darter before moving within 10-8 and supplying a two-dart combination on 72 to enter the break trailing 11-9.

“That was a hell of a game. I had to play well, Michael played the best he’s played in ages. What a game. I would have liked to have watched it personally.”

Peter Wright reflects on his win over MVG

Snakebite then appeared to tinker with his darts, not that it slowed him down as he sent a stunning 149 to go three legs clear before taking out 80 on tops and then delivering 121 on the bullseye for 14-10.

His dominance was unwavering, Wright coasting to 16-10 and finally icing a phenomenal performance with a 74 checkout to confirm his place in the final and prompt an emotional post-match reaction.

Van den Bergh comes from behind to topple Ratajski

Reigning champion Dimitri Van den Bergh had to dig deep to reach his second straight World Matchplay final as he came from 6-2 down to reel off eight successive legs before withstanding a fightback to beat Krzysztof Ratajski 17-9.

Though there was nothing to fault about Ratajski’s scoring, the collapse of his finishing while in the ascendency proved damning encouragement to Van den Bergh, whose 45 percent on doubles ultimately set him apart.

An ice-cold Ratajski made a tremendous start to his maiden major semi-final as he punished Van den Bergh’s cagey bust on 72 before reeling off an 11-darter via a 92 checkout for a 3-0 advantage. The Dreammaker finally got off the mark with a 74 finish on double 16, only for Ratajski to deliver a 13-darter for 4-1 having missed double eight for a stunning 136.

The Polish Eagle continued to build as he responded to Van den Bergh winning his second leg by producing a two-dart combination to see off 68 for 5-2, followed by another break of throw on a 94 checkout while averaging upwards of 101 to his opponent’s 93.

The reigning World Matchplay champion Dimitri Van den Bergh is through to the final!

Ratajski proceeded to display his first signs of nerves when he missed his double for a 52 checkout and a 7-2 cushion, offering Van den Bergh an inroads to a break and 6-3, which became 6-4 moments later courtesy of double five to get the Belgian back in the match.

It felt like a defining momentum changer, Van den Bergh proceeding to win the next seven legs after punishing Ratajski’s miss on tops for a 120 checkout followed three wayward darts at double five for his first lead of the night at 7-6 before going three clear by nailing double 16 for a clinical 128 finish and then accepting an open goal for a 50 checkout to cap a commanding session.

You sensed it was Van den Bergh’s to lose as he marched to 10-6, but back came a resilient Ratajski to make it 10-7 on the back of 16 missed darts before punishing the Belgian’s three misses on double 12 for 10-8 and then dispatching 70 to move within one.

A 110 checkout restored Van den Bergh’s stronghold at 11-9, as did double eight for 12-9 after another Ratajski slip up, double 16 for 13-9 and 15-darter for 14-9 courtesy of a 112 finish. Van den Bergh misses six darts until firing his seventh for 15-9, made no mistake on double 10 and then wrapped up the victory on double five to stride on to Sunday’s conclusion.

Watch the World Matchplay from the iconic Winter Gardens all the way through until Sunday, July 25. Check out daily Darts news on skysports.com/darts, our app for mobile devices and our Twitter account @skysportsdarts