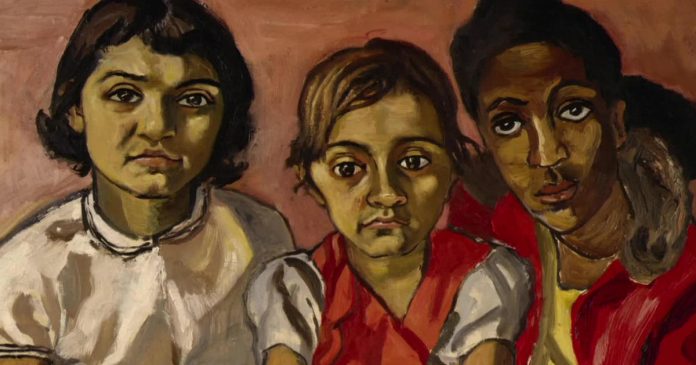 In the 1978 documentary “Alice Neel: They Are Their Own Gifts,” the artist said, “One of the reasons I painted was to catch life as it goes by, right hot off the griddle. …

“With me, painting was more than a profession; it was also an obsession. I had to paint.”

The late artist called herself “a collector of souls,” and those souls are now on display at the Metropolitan Museum of Art in New York City.

Correspondent Faith Salie asked, “When people walk in and meet this image, what do you want it to tell them about the experience they’re gonna have with Alice Neel?”

“Well, I hope that they’re a bit shocked!” Baum laughed.

“Neel very often painted people and things that she wasn’t supposed to, especially as a woman artist,” Baum said. “And here, the candor, honesty, forthrightness with which she depicted the pregnant body – “

“It is a challenge, because this is a body, especially an unclothed body, that we’re not used to seeing, and that, frankly, we’re not supposed to see.”

Neel was born in 1900 and grew up in Colwyn, Pennsylvania, and, well, here’s how she felt about that: “I lived in a small town. I hated it.”

So, at 21 she enrolled in the Philadelphia School of Design for Women. In the documentary she explained, “I deliberately went to a girl’s school because I didn’t want to be distracted by boys. I was a very good-looking girl, so my whole life was disrupted by men.”

Indeed, it was a disruptive man, Cuban artist Carlos Enriquez, with whom she moved to Havana to make art. Their marriage was brief and tragic. Neel painted her way through her own pain, and honored the hard realities of others, especially when she moved to Spanish Harlem during the Great Depression, where she captured the people in her neighborhood.

Describing the 1959 painting, “Two Girls, Spanish Harlem,” Baum said, “These are two girls that Neel met in Spanish Harlem where she moved in 1938; Carmen and Antonia Encarnación. They’re not sitters whose visages would normally have been recorded in what we think of as fine art. She was very aware of the struggles that girls like these would’ve faced growing up: poverty, under-investment from the city, illness.”

“You didn’t sit for Neel expecting to be flattered,” laughed Randall Griffey, co-curator of the exhibit. “She’s unflinching, candid. There’s an egalitarian streak about her that comes through, rich, poor, Black, White, Brown, men, woman.”

Neel’s unblinking focus on people meant she refused to create the kind of abstract expressionism that was bringing acclaim to her contemporaries in the 1940s and 50s.

“It’s actually one of the reasons that she really hasn’t been canonized,” said Griffey. “Modern art has been written about mostly as a succession of avant-garde-isms. And Neel doesn’t fall into that.”

Someone who knows firsthand what it was like to be revealed by Neel is her daughter-in-law, Ginny Neel, who is married to one of Alice’s two sons, Hartley.

Salie asked, “Did she suggest that you sit that way? Or is that the way – “

Ginny, who knew Alice Neel for 20 years before the artist died in 1984, says there was much more to her sweet-looking mother-in-law than met the eye.

“Did the kids call her Grandma?”

Yet, Neel’s paintings are as American as apple pie, in their honest revelations of who we are: the overlooked, the flamboyant, the underrepresented, and the unapologetic.

As the artist herself said, “I painted in obscurity for years and years. If I didn’t paint all the time I probably wouldn’t live. That’s what keeps me alive.”