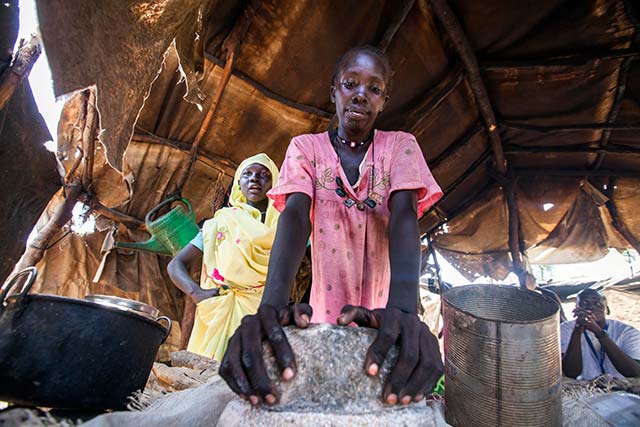 Up to 4.8 million people in South Sudan – well over one-third of the population – will be facing severe food shortages over the coming months, and the risk of a hunger catastrophe continues to threaten parts of the country, three UN agencies warned today.

The Food and Agriculture Organization of the United Nations (FAO), the United Nations Children’s Fund (UNICEF) and the World Food Programme (WFP) stressed that while the deteriorating situation coincides with an unusually long and harsh annual lean season, when families have depleted their food stocks and new harvests are not expected until August, the level of food insecurity this year is unprecedented.

According to the Integrated Food Security Phase Classification (IPC) update released today by the government, the three agencies and other humanitarian partners, 4.8 million people are projected to be in need of urgent food, agriculture and nutrition assistance through July, up from 4.3 million in April. This is the highest level of hunger since the conflict in South Sudan began two-and-a-half years ago. This number does not include 350,000 residents of the UN Protection of Civilians areas or other camps for displaced people, who currently are entirely dependent on humanitarian assistance.

“We are very worried to see that food insecurity is spreading beyond conflict areas as rising prices, impassable roads and dysfunctional markets are preventing many families, even those in towns and cities, from accessing food,” said FAO Country Representative Serge Tissot.

Food insecurity and conflict are also forcing many families to leave South Sudan for neighbouring countries. In the last few months alone, an estimated 100,000 South Sudanese people have crossed into Sudan, Kenya, the Democratic Republic of Congo and Uganda, and this number is expected to increase to more than 150,000 by the end of June.

“The levels of malnutrition among children continue to be truly alarming,” said Mahimbo Mdoe, UNICEF’s Representative in South Sudan. “Since the beginning of the year more than 100,000 children have been treated for severe malnutrition. That’s a 40 per cent increase compared to the same period last year, and a 150 percent increase since 2014.”

Working with a large number of international and local non-governmental organizations, FAO, UNICEF and WFP will continue to deliver life- and livelihood- saving support under these difficult circumstances. “We are now seeing sharp spikes of need in new areas, such as Eastern Equatoria or Western Bahr el-Ghazal, where malnutrition rates in some places are reaching dangerous levels. We have started ramping up food and nutrition support, but much more is needed to keep things from deteriorating even further during the lean season,” said WFP Country Director Joyce Luma.

In 2016, FAO is planning to provide emergency livelihood support to 3.1 million people in South Sudan. It is currently distributing over half a million crop and fishing kits and is assisting livestock production through the vaccination of some 11 million animals. The dramatic rise in malnutrition rates, means that in the first four months of the year UNICEF has already treated 45 per cent of its planned 2016 caseload of 166,000 children.

WFP plans to assist 3.3 million people in South Sudan this year through a combination of emergency food assistance, lifesaving nutrition support for mothers and young children, community-based asset-creation projects where possible, and safety net programmes such as school meals.