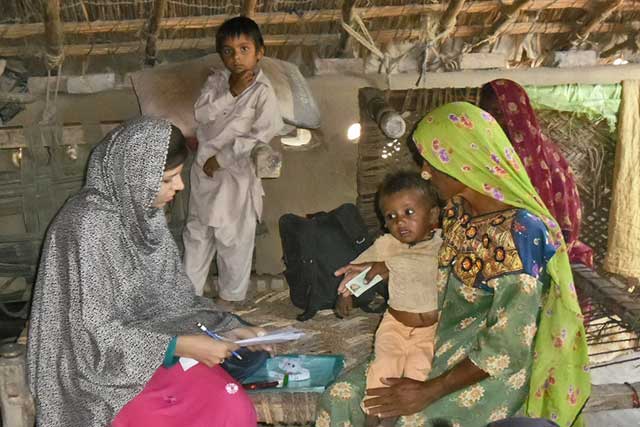 In 2015, drought and floods linked to El Niño and the impact of the earthquake in Pakistan have left more than 1.5 million people in need of immediate assistance, according to estimates from FAO and other Food Security Cluster (FSC) members. FSC partners estimate that USD 165.5 million will be required to assist those in need. In Sindh province – the area most hit by disasters – extensive surveys have been conducted, including the Household Economy Analysis and the Sindh Province Drought Needs Assessment.

Both represent a comprehensive, multiagency effort to identify the extent of the natural disasters in Sindh and beyond, and the impact of these disasters on livelihoods, food security, nutrition, health, water and sanitation. More importantly, they aim to provide joint recommendations for emergency, recovery/rehabilitation and development strategies. This will also foster better understanding of drought and coping strategies and the related social and economic implications.

FAO works in partnership with national governments, United Nations partners and international and local Non-governmental Organizations to coordinate, support and implement a wide range of assessments of the agricultural and livestock sectors.

A toll on agricultural productivity and livelihoods

The monsoon accounts for up to 78 percent of annual rainfall in Sindh, varying between districts, with the highest contribution in Tharparkar. The heavy reliance on monsoon rains – particularly in the south of Sindh – makes the province extremely vulnerable to droughts, especially in the face of the 2013–2015 El Niño phenomenon, which has weakened the monsoon and resulted in a protracted drought. Consequently, water scarcity in Sindh province has increased considerably, causing large reductions in yields and even causing farmers to abandon cultivation. Low yields have translated into reduced seed reserves, with 68 percent of farmers reporting not having seeds for the next cropping season.

The farmers most affected by drought in Sindh were those without access to irrigation water, while those with access to tube wells have managed to prevent their harvest from collapsing. Overall, more than 50 percent of wheat farmers in the West have experienced a harvest loss of 30 percent according to the assessment findings. Bean farmers were seriously affected: harvests were diminished by 52 percent in the West, 44 percent in the irrigated zone, 53 percent in the East and 19 percent in the Southeast.

Losses in livestock and other assets affect the most vulnerable

Livestock owners were also negatively impacted by drought. In Sindh province, the most vulnerable farmers rely on livestock for their livelihood. According to the assessment, farmers lost nearly half of their buffalos and sheep or goats in the West, around one quarter in the irrigated zone, one third in the East and up to two thirds on average in the Southeast. These losses have been triggered by a diversity of causes including fodder or water scarcity and indirect effects such as sales.

Households with a stable off-farm income are less vulnerable to drought. For example, landless rural households tend to rely exclusively on their labour, so they have strong dependence on non-agricultural sources of income. This is also true for female-headed households and women in the work force in general, who are considerably more likely to work in handicrafts than men.

The analysis of the assessment results has generated recommendations for decision-makers, focused on the short, medium and long term. In the short term, the distribution of agricultural inputs, livestock vaccine kits and fodder or synthetic feed would help the response to the disaster by contributing to the increase of productivity in the livestock and agriculture sectors.

Medium-term measures include shrub and tree planting to contribute towards the production of timber, fruit and livestock feed and thereby increase income. Intercropping could also be explored for its advantages in terms of diversification and soil amelioration, along with its positive nutritional effects. Increased water productivity has been identified as the most efficient and cost-effective way to respond to drought, and can be supported through water accounting systems to monitor water levels, extension services to increase yields, and conservation agriculture to reduce wastage.

Long-term efforts should prioritize production systems of vulnerable communities in remote areas in order to increase equity. The measures identified include the improvement of the existing irrigation systems and investments in more efficient machinery, equipment and training; the improvement of water storage systems; and the establishment of better linkages to markets and other infrastructure.

As such, the assessments represent a step towards an evidence-based response to the ongoing crisis through the definition of effective drought adaptation/risk mitigation measures, as well as the prioritization of actions in order to save lives and livelihoods and to strengthen capacities of the Government and communities at risk of disasters.