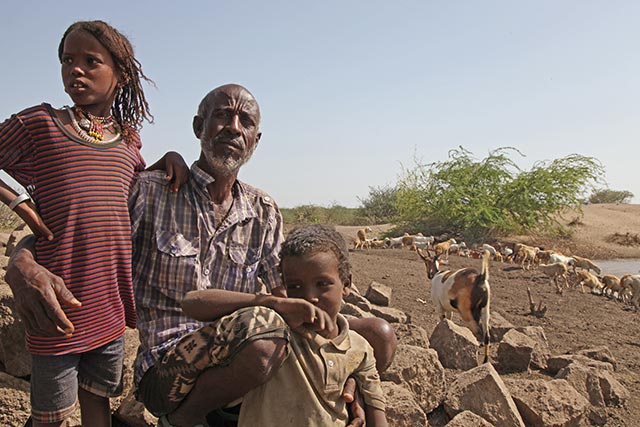 Nationwide floods have levelled another blow to the recovery process for drought-affected pastoralists in Ethiopia. Well over 55 000 hectares of land – much of it pasture– has been flooded since late April. So far, thousands of livestock have been lost to the flash floods and landslides that continue to plague regions such as Somali, SNNPR (Southern Nations, Nationalities, and Peoples’ Region), Oromia, Amhara and Afar. In May, Ethiopia’s National Flood Task Force indicated that over 400 000 people would be affected, 180 000 of that number displaced by floods in 2016. Estimates rose significantly in June 2016, as updated reports from the government body are that close to 690 000 people are now likely be affected, with over 320 000 estimated to be displaced. These predictions may rise even further as these heavy rains come on the cusp of what some meteorological experts predict will be a significant La Niña episode – usually accompanied by heavy rainfall – starting as early as September 2016.

Brought on by the long-awaited belg or spring season rains, the floods followed more than 18 months of dry spells and poor rainfall induced by an El Niño drought phenomenon still wreaking havoc across the Horn of Africa. Aid delivery has been further complicated as some communities have been rendered impassable by flood waters. In June, the Federal Ministry of Health issued an alert for water-borne diseases, following cases of hospitalization in Addis Ababa. Attributed to the recent heavy rains, an investigation is ongoing.

Though rainfall levels are, on average, normal or slightly above normal in many areas, due to the intensity of precipitation, flooding has been widespread in affected regions. Alternately, in parts of the country, particularly the south, the belg rains have underperformed.

The compounded impact of both the El Niño-induced drought and the recent floods has eroded coping mechanisms among households. Animal health is particularly at risk, and livestock experts have highlighted the crucial role of emergency on-the-ground health provisions such as vaccinations and treatments to prevent or mitigate the spread of disease in affected areas. In 2015, FAO’s vaccination and treatment campaigns included more than 1.4 million livestock belonging to 77 118 households. The Organization is currently appealing for USD 3 million to continue animal health campaigns into September, 2016.

Due to the severity of the drought, the provision of survival and supplementary animal feed was essiential. In order to reduce losses of core breeding animals, multinutrient blocks were distributed to pastoral and agropastoral households. In collaboration with regional governments, FAO also provided supplementary feed along migratory routes, strengthening the survival chances of vulnerable herds. With support from the Government of Belgium, the Organization also purchased non-core breeding stock from households in Somali Region and after a health inspection, meat was distributed to displaced, food insecure households.

By supporting the smallholder use of fast-growing forage planting seeds and materials, FAO has enhanced the nutrition and food security of more than 7 600 of the worst-affected households.

Affected pastoralist households reported losses as high as 80% for small ruminants and 40% for cattle in 2015 and 2016. Low animal body conditions also resulted in diminished terms of trade.  In Somali Region, animals previously bartered for two bags of grain were routinely sold for only one at the height of the crisis. FAO estimates that households who lost small ruminants may need at least two years to return to pre-drought levels, while cattle-owning households may require double the recovery time. Above-normal levels of migration in search of pasture and water were also recorded. Milk production is slowly rising, after falling dramatically in drought-prone and livestock-dependent regions such as Afar and Somali.

According to the current Humanitarian Requirements Document which will be revised in early June following the conclusion of the on-going belg season assessment, 10.2 million people are food insecure and a third of all districts have been classified as severely so. Ensuring the survival and productivity of livestock will be critical to improving the food security, financial and nutrition status of livestock-dependent households in 2016.

FAO has mobilized a technical team comprised of 27 staff members to participate in the belg season assessment, joining government and other partners on the ground. Working closely with ministries and regional government officials, the organization will co-author documents on the crop and livestock sectors as well as the impact of the belg season floods. The findings of this assessment will feed into an updated response and recovery strategy which will serve as a roadmap for FAO’s emergency El Niño-related activities going forward.