Home Top News Responding to the El-Niño in Zimbabwe 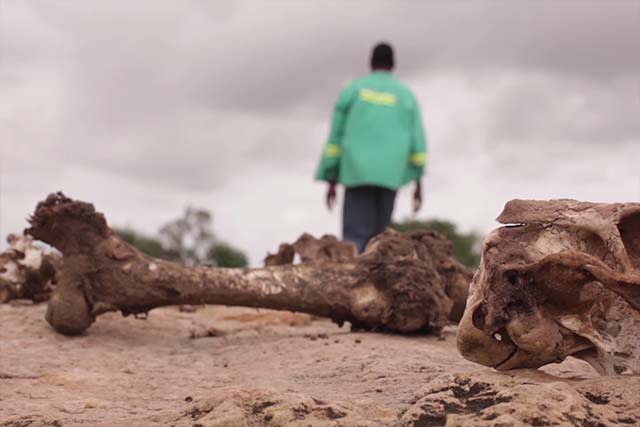 Southern Africa is currently in the grip of an intense drought driven by one of the strongest El Niño events recorded in the past 50 years. Across large swathes of Zimbabwe, this year’s rainfall season has so far been the driest in recent years. In typical years families normally have enough food to eat after the main harvests begin in late March and April; that however is not the case this year. Chipinge district, which lies in the eastern highlands of the country, is about 400km from the country’s capital – Harare. Thousands of cattle in the region have died lack of pasture and water. Livestock remains and skeletons have become a common sight for the community here.

Walter Mhlaba from Musikavanhu village in Chipinge had 15 cattle. Because of the poor state of his cattle, he sold a few – some of which, he had to trade for a pittance. With funding from the United Nations Central Emergency Response Fund (CERF), the Food and Agriculture Organization of the United Nations (FAO) is supporting 8,000 families. Through this project, livestock and crop farmers were able access subsidized animal feed and drought-tolerant small grain and legume seeds. They also received training on how to best manage crops and livestock during the drought. From the proceeds received from the sale of the subsidized animal feed and seeds, the project has established a drought mitigation revolving fund in each of the seven-targeted district. This money is already being used by the communities to procure additional stock feed as well as rehabilitate water points for both human and livestock consumption.

The effects of the El Niño induced drought will continue to be felt across the different sectors of agriculture, water and sanitation, energy, health and education. It is however projects like these, that will be required to assist vulnerable families to restore agricultural production, regain their livelihoods and better withstand future climatic shocks.