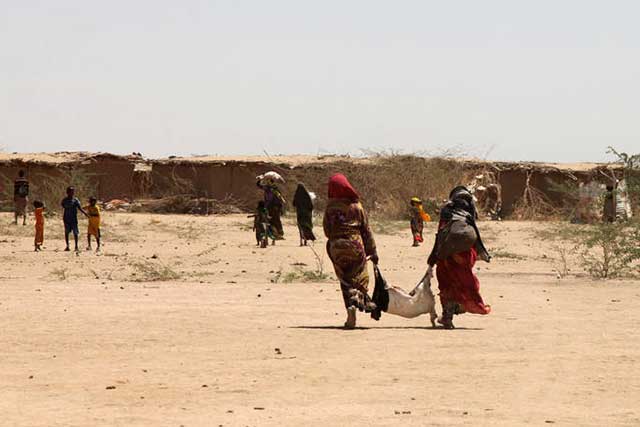 Combined efforts to prevent further human suffering, strengthen resilience and safeguard livelihoods in the wake of El Niño’s devastating effects worldwide must be rapidly ramped-up by governments and the international community, United Nations (UN) leaders said today. More than 60 million people worldwide, about 40 million in East and Southern Africa alone, are projected to be food insecure due to the impact of the El Niño climate event.

The heads of the three Rome-based UN agencies urged greater preparedness to deal with the possible occurrence later this year of a La Niña climate event, closely related to the El Niño cycle that has had a severe impact on agriculture and food security. The Horn of Africa, Southern Africa, Central America’s Dry Corridor, Caribbean islands, Southeast Asia and Pacific islands have been hit the hardest.

Scientists are predicting an increasing likelihood of the opposite climate phenomenon, La Niña, developing. This will increase the probability of above average rainfall and flooding in areas affected by El Niño-related drought, whilst at the same time making it more likely that drought will occur in areas that have been flooded due to El Niño.

The UN estimates that without the necessary action, the number of people affected by the combined impacts of the El Niño/La Niña could top 100 million. To coordinate responses to these challenges and to mobilize the international community to support the affected governments, UN agencies and other partners met at the Rome headquarters of the Food and Agriculture Organization of the United Nations (FAO) today. The meeting included the International Fund for Agricultural Development (IFAD) and the World Food Programme (WFP).

The meeting called for action to recover agricultural livelihoods that have been severely damaged by the droughts associated with El Niño. Acting now will ensure that farmers have sufficient levels of agricultural inputs for upcoming planting seasons. Furthermore, FAO, IFAD and WFP are redoubling efforts to mitigate the negative impacts and capitalize on positive opportunities of a likely La Niña phenomenon in the coming months. This means acting decisively to prepare for above-average rainfall in some areas and potential drought conditions in others.

FAO Director-General José Graziano da Silva warned that the impact of El Niño on agricultural livelihoods has been enormous and with La Niña on the doorsteps the situation could worsen. “El Nino has caused primarily a food and agricultural crisis”, Graziano da Silva said. He announced that FAO will therefore mobilize additional new funding to “enable it to focus on anticipatory early action in particular, for agriculture, food and nutrition, to mitigate the impacts of anticipated events and to strengthen emergency response capabilities through targeted preparedness investments.”

Mobilizing resources for rapid action now can save lives and minimize damage while reducing costs in the future, said WFP Executive Director Ertharin Cousin. “The massive impact of this global El Niño event, exacerbated by persistent poverty and chronic hunger in many countries, threatens the food security of millions of people who are the least able to cope,” she said.

“Farms have failed, opportunities for work have evaporated, and nutritious food has become increasingly inaccessible for many communities,” Cousin added. “But new humanitarian crises are not inevitable if we invest in support for communities and provide the tools and skills required to endure climate-related shocks.”

IFAD Associate Vice President, Lakshmi Menon, reminded the global community not to forget about small-scale farmers, who are the most vulnerable to these extreme weather events. “Small-scale farmers in rural areas are disproportionally impacted by these natural disasters because many of them depend on rainfed agriculture for their lives and livelihoods, and they do not have the capacity to bounce back from shocks. We need to invest in building their long-term resilience so when the next El Niño and La Niña cycles hit, they are better prepared and can continue to grow food for their families,” she said.

UN Special Envoy for El Niño and Climate, Ambassador Macharia Kamau said: “It is clear that these types of extreme weather events are stressing already-vulnerable communities, threatening to undermine development gains of recent decades and impede achievement of the Sustainable Development Goals.”

He noted that the humanitarian community in partnership with governments and regional authorities have developed a number of plans in order to respond to the current El Niño event, and that these plans are multisectoral and require longer-term, predictable funding in order to ensure they are fully implemented.

Drought has gripped large swathes of east and southern Africa and has also hit Indonesia, Papua New Guinea and Viet Nam, while El Nino-associated storms have wiped out harvests in Fiji and some of its neighbouring island states.

Participants noted that in southern Africa a three-month “window of opportunity” exists before the 2016/17 planting season begins and that adequate interventions, including agricultural input distributions are  urgently needed to avoid the dependence of  millions of rural families  on humanitarian assistance programmes well into 2018.

In Southeast Asia, drought and saltwater intrusion are threatening the livelihoods of farmers in Viet Nam and also seriously impacting household food security and cash availability. With the monsoon season fast approaching, most farmers need to purchase inputs for their upcoming agricultural and animal production activities. While in the Pacific region the Federated States of Micronesia, Marshall Islands and Palau have already declared a state of emergency and below-normal rainfall is forecast to continue across the northern and western Pacific areas threatening the livelihoods and well-being of 1.9 million people.

In Southern Africa, FAO is supporting more than 50 000 households including in Zimbabwe with livestock survival feed and drought-tolerant sorghum and cowpea seeds, and in Malawi, by vaccinating small livestock and providing drought-resistant cereals and irrigation support. In Lesotho and Mozambique, FAO has been strengthening national response and providing coordination support.

Throughout the Horn of Africa, in partnership with governments NGOs and other UN agencies, FAO is coordinating drought-related interventions, providing agricultural inputs, helping to rehabilitate water structures and animal health and production, and plant and animal disease surveillance and control.

In the Asia Pacific region, FAO’s El Niño response includes a detailed assessment of the situation in Viet Nam where it is also on standby to provide emergency seeds and tools. In Fiji, FAO is currently providing emergency assistance to 1 050 households as part of the Cyclone Winston response. FAO is working with partners in Papua New Guinea to support farming families in the worst affected provinces with drought-tolerant seeds and smart irrigation material (e.g. drip-irrigation systems). In Timor-Leste, additional maize and cover crop seeds are being distributed to farmers affected by El Niño.

Building climate resilience to drought and other extreme weather events is a priority in IFAD-supported projects and this is helping vulnerable families cope with the impacts of El Niño. For example, in Ethiopia small-scale irrigation schemes have ensured farmers are less dependent on rainfed agriculture. This is coupled with training in more sustainable water usage, water harvesting techniques and rehabilitation of degraded soils. In the Mekong Delta of Viet Nam, IFAD-supported projects are helping farmers to access saline-tolerant rice varieties and to diversify their incomes into small-scale aquaculture, so they are not solely dependent on rice and can continue to earn incomes during the drought.

World Food Programme has rapidly scaled-up relief operations to assist communities grappling with El Niño’s impacts, providing emergency food where needed or cash to buy food where markets are functioning. In Ethiopia, more than 7.6 million people have received food assistance from WFP and more than 200 000 people have also received cash transfers. In Swaziland, WFP has launched emergency food distributions and in Lesotho, has begun cash-based transfers. In Malawi, WFP will scale up its new lean-season food assistance programme to reach more than 5 million people by November. In Papua New Guinea, over 260 000 people affected by El Niño-related food insecurity are receiving WFP food assistance.

Resilience-building is integrated into emergency responses when possible. In Zimbabwe, a grains production pilot supported by weather-based financing facility FoodSECuRE trains smallholder farmers in climate-smart agriculture and the use of drought-tolerant grains. The Rural Resilience risk management Initiative (R4) has provided El Niño-related payments to affected farming families in Ethiopia, Malawi and Senegal. WFP also works closely with African Risk Capacity (ARC), an insurance pool to lower the cost of the response to disasters before these become humanitarian crises.”