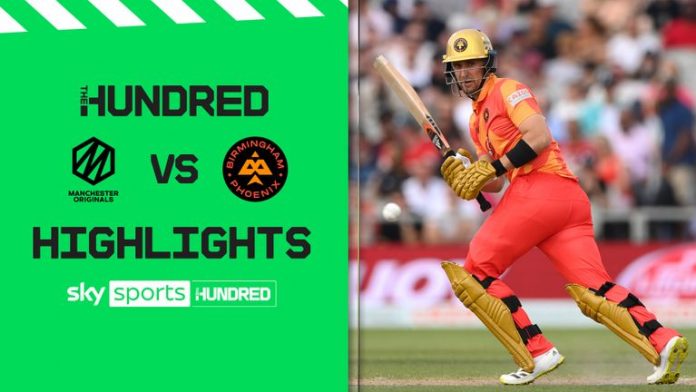 Birmingham Phoenix become the first team to be bowled out short of completing their 100 balls as they could only muster 87 from 84 deliveries; Matt Parkinson takes four wickets for just nine runs, including his Lancashire and England team-mate Liam Livingstone

Matt Parkinson starred, taking 4-9 as Manchester Originals got their first victory in The Hundred against Birmingham Phoenix.

Manchester Originals claimed their first win in The Hundred as they hammered a sorry Birmingham Phoenix side by six wickets at Emirates Old Trafford on Sunday night.

Phoenix became the first team to be bowled out short of completing their 100 balls as they could only muster 87 from 84 deliveries after winning the toss and choosing to bat first.

Lancs vs Lancs… England vs England… and Matt Parkinson wins the battle!

Matt Parkinson was the star of the show, taking four wickets for just nine runs – which included the scalp of his Lancashire and England team-mate Liam Livingstone for 12. The legspinner later returned to take three further wickets in the space of three balls to wrap up the Phoenix innings.

Carlos Brathwaite (2-13) and Calvin Harrison (2-18) were also impressive with the ball, with the former claiming the wicket of Phoenix captain Moeen Ali (15) and the latter picking up their match-winner from Friday night, Chris Benjamin for nine.

In reply, the Originals quickly set about their modest target, with Phil Salt smashing 22 from 11 balls at the top of the order and Jos Buttler hitting a more sedate 30 from 31.

Neither could see the team home, while Joe Clarke (6) and Colin Munro (7) too came and went cheaply, but the outcome of the contest was never truly in doubt and Carlos Brathwaite cracking the winning boundary with 27 balls to spare.

Carlos Brathwaite gets #ManchesterOriginals over the line to a six-wicket win as he smacks his second ball for four. #BirminghamPhoenix beaten heavily.#TheHundred 💯

Parkinson winning his personal duel with Livingstone with his first delivery, ensuring him bragging rights for when these two next share a dressing room.

Livingstone has been in sensational form with the bat over the last few weeks, striking his maiden international century, and the fastest-ever for England across all formats, in the first T20I against Pakistan, before following that up with a monstrous six in the second game at Headingley.

In England’s second T20I against Pakistan, Liam Livingstone hit one of the biggest sixes some of the commentators had ever seen!

But there were to be no such fireworks from him on this occasion as he looked to take on his old pal’s very first ball, only to send a thick outside edge to the fielder stationed at short third man.

Also Parkinson. Unsurprisingly. His figures are the second-best returned so far in the tournament, behind only Marchant de Lange’s five-for in Trent Rockets’ win over Southern Brave on Saturday.

As well as the wicket of Livingstone, Parkinson bowled a ripper to clean up Chris Cooke later on. Old Trafford has played host to a couple of miracle leg spin deliveries before, most notably Shane Warne’s ‘Ball of the Century’ to bowl Mike Gatting in the 1993 Ashes.

Parkinson himself provided one earlier in the year when he bowled Northamptonshire batter Adam Rossington in the County Championship with a delivery that pitched well outside leg-stump and turned sharply to hit the top of off.

An ‘absolute ripper!’ so says @markbutcher72

His effort to Cooke wasn’t quite up to the same standard, but it wasn’t far off, with it it again turning square to beat the batter and smash into the stumps.

We’re back at Trent Bridge on Monday for another thrilling double-header, with the Trent Rockets hosting Northern Superchargers.

Watch both games on Sky Sports The Hundred and Main Event, as well as the Sky Sports Cricket YouTube channel, with the women’s game getting underway from 2.30pm and the men following at 6pm.

Watch continued coverage of The Hundred live on Sky Sports throughout the summer!