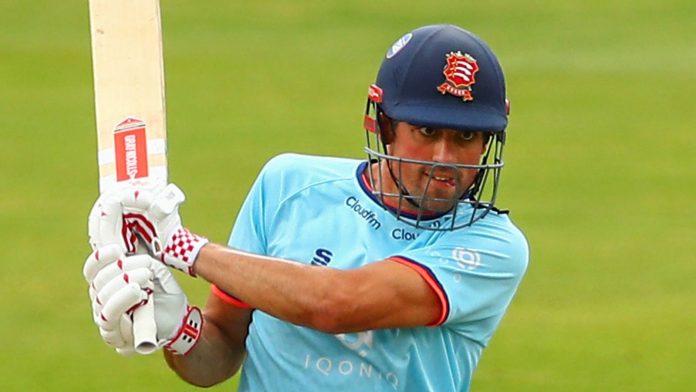 Yorkshire 19-year-old Harry Duke hits a maiden century in senior cricket in a seven-wicket win over Leicestershire; James Hildreth hits a hundred as Somerset begin their title defence with a six-wicket win over Derbyshire

Sir Alastair Cook hit an unbeaten 92 to help Essex cruise to a nine-wicket win over Middlesex at Chelmsford to make it two wins from two in the One Day Cup.

Cook put on a partnership of 159 with captain Tom Westley, who finished 87 not out, seeing the home side to their victory target with 66 balls to spare.

Shane Snater had taken 3-45 earlier in the day to help dismiss Middlesex for 212, despite List A debutant Jack Davies top scoring with 70.

Harris, whose 127 was his maiden List A ton, and Hill (108) shared a third-wicket partnership of 212 as Leicestershire posted 327-7 batting first. Yorkshire seamer Matthew Waite (5-59) claimed his first five-wicket haul in List A cricket.

It looked a daunting target after Will Fraine (45) and Gary Ballance (43) had both fallen when well set, but wicketkeeper-batsman Duke and 20-year-old George Hill – like Duke playing in only his second List A match – won the day for their team with a partnership of 172 in 33 overs.

Duke was bowled by Ed Barnes for 125 before Hill (90no) and Jonny Tattersall (6no) saw their side over the line with 13 balls to spare.

James Hildreth’s eighth List A century and an elegant 94 from Steve Davies helped Somerset begin their title defence with a six-wicket win over Derbyshire at Taunton.

Derbyshire posted a score of 298 all out after losing the toss, with Fynn Hudson-Prentice (93) and Brooke Guest (74) hitting career-best List A scores, while 18-year-old seamer Sonny Baker claimed 3-46 on debut.

In reply, Somerset cruised to their target, winning with two overs to spare. Davies led the way with an imperious 72-ball innings, before Hildreth weighed in with 110, which including nine fours and three sixes.

Worcestershire captain Joe Leach slammed a career-best 88 from 51 balls to transform his side’s fortunes and seal an unlikely three-wicket win over Kent at New Road.

Chasing 323 for victory, Worcestershire slumped to 184-6 despite solid efforts from Jack Haynes (77) and Tom Fell (57) – only for Leach to savage the Spitfires’ attack in an onslaught that included seven sixes and five fours.

The skipper dominated a seventh-wicket stand of 134 with Ed Barnard and, although he was trapped lbw by Matt Milnes with just five required, Worcestershire scrambled over the line with five balls to spare.

Nottinghamshire seamer Lyndon James finished with career-best List A figures of 5-48 – including two wickets in as many balls – to help clinch a resounding 86-run victory over Warwickshire at Edgbaston.

Haseeb Hameed continued his good form for Nottinghamshire, hitting 103 from 92 deliveries as he and Ben Slater (86) guided the visiting side to a score of 323 all out.

In reply, Bears opener Rob Yates hit 103 to keep his side in contention, but the middle and lower order faltered, with James capturing the final three wickets as Warwickshire were ultimately dismissed for 237.

Danny Lamb too claimed career-best figures of 5-30 to inspire Lancashire to a comfortable six-wicket victory over Gloucestershire in a one-sided contest at Bristol.

Lancashire, having won the toss, inserted the hosts on a drying pitch beneath leaden skies and, with seamer Lamb leading from the front, dismissed Gloucestershire for 171 in 48 overs.

Only lower-order resistance from Matt Taylor, who top-scored with 51 not out, and George Scott, who contributed 43 runs to a swashbuckling eighth-wicket stand of 69, prevented an even heavier defeat.

In reply, Keaton Jennings registered a patient 47, while Josh Bohannon (24), Luke Wells (31) and Rob Jones (21) all weighed in with useful cameos before Steven Croft (28no) and George Balderson (14no) saw Lancashire attain their target with 6.2 overs to spare. Gloucestershire’s Josh Shaw took 4-36 in the losing cause.

Michael Hogan and Joe Cooke took three wickets apiece to knock the stuffing out of a strong Northamptonshire line-up as Glamorgan triumphed by 59 runs to make it two wins from two in the tournament.

Veteran seamer Hogan (3-26) turned in a hostile opening spell to claim two early scalps, while promising allrounder Cooke (3-32) followed his three wickets on List A debut against Warwickshire on Thursday by removing the Northants middle order, having earlier pitched in with an unbeaten 33 with the bat.

Earlier, an assured 86 from New Zealander Hamish Rutherford was the bedrock for the Glamorgan innings, before some brutal hitting from Cooke and Tom Cullen pushed them up to an imposing total of 295-6.

Despite 65 from Tom Taylor, the target proved beyond Northants’ reach as they were bowled out for 236 in 44.2 overs.

Finally, the match between Sussex and Durham was called off without a ball bowled due to bad weather.

There was overnight rain in Hove and further downpours in the late morning and early afternoon gave the umpires little option but to abandon the game shortly after a final pitch inspection at 2.45pm.